Kaaboo’s a New Star for Cowboys 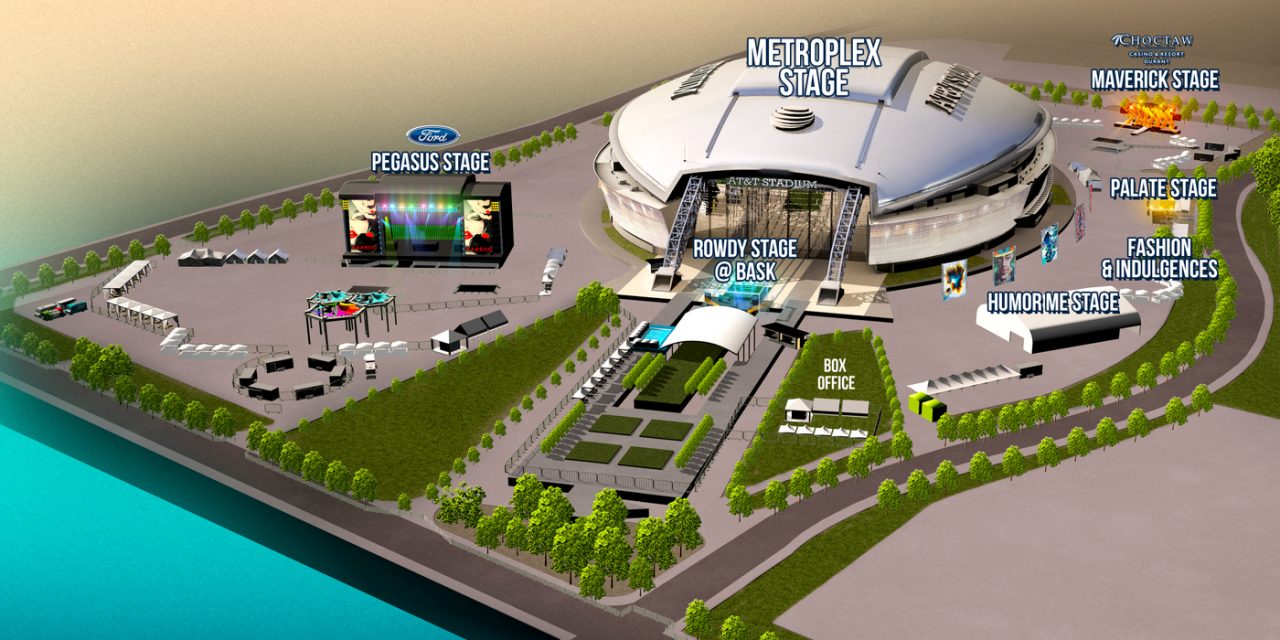 AT&T Stadium will turn its parking lot into festival space when it hosts Kaaboo Texas this weekend. (Courtesy Kaaboo)

The Lone Star State is getting a five-star experience. Kaaboo, the high-end festival that started in Del Mar, Calif., five years ago will touch down at  AT&T Stadium in Arlington, Texas, this weekend starting Friday.

“Kaaboo has taken our paradigm to a whole new level by partnering with the Jones family,” said Jason Felts, Kaaboo’s chief brand and marketing officer, referring to the family led by Jerry Jones that operates the venue and owns its primary tenant, the NFL’s Dallas Cowboys.

“Everything is bigger in Texas,” Felts said. “The Jones family has done a tremendous job of creating world-class entertainment experiences beyond their core brand. Whether it’s boxing, or the (NFL) draft, the Jones family have come through. So, their support of a Kaaboo Texas was one of the biggest drivers of bringing Kaaboo here.”

Kaaboo started in 2015 in Southern California as an adult escape, Felts said. It’s been wildly successful and a fifth Kaaboo Del Mar will be held in September. Kaaboo Cayman Islands followed in February. That two-day event sold out.

“We recognized we could create a weekend experience that focused on educated people, with discretionary income, who loved music who didn’t want the dust, the dirt and the port-a-potties,” Felts said.

Charlotte Jones Anderson, chief brand officer of the Dallas Cowboys, is convinced that a luxury festival such as Kaaboo — which features celebrity chefs, a swimming pool, comedy clubs, and golf carts to get around — will gain traction in Texas.

“When we built AT&T Stadium, we knew we had to do more than host 10 games a year, and we designed the venue in a way that was flexible, unique and different,” Jones Anderson said. “Attracting exciting content to come to North Texas has always been in the blueprint of this stadium. We have gone after all the major events from the Super Bowl to the Final Four to the college (football) championship and we’re taking steps to create events that don’t exist here yet.”

When Jones Anderson and her team met the Kaaboo team, she was convinced they were the perfect match.

“When we dabble outside what we do best, we look to industry experts to bring their experience into our home,” she said. “We’re marrying what Jason and Kaaboo know about putting on a festival the right way with what we know about our fans.”

Kaaboo Texas will be AT&T Stadium’s first festival. “We have always led with quality content, and this festival, with its focus on the VIP experience, is what we wanted. It’s hasn’t been done before here,” she said.

This will also be the first time an event at the facility is not contained inside the stadium. “The setup is one stage inside and the rest in the parking lot,” Jones Anderson said.

“We have room for 100,000 people,” Jones Anderson said. “But we want do it right, rather than fast, by growing the event year-over-year.”

Regardless of which package you purchase, “everyone is treated like a VIP at a Kaaboo festival,” Felts said.

Felts said the F&B concept was a hybrid between what he knows works well mixed with local cuisine.

RFID bracelet payments will be available, AT&T’s first full execution of the technology. “We’re excited about the process and installation and what the consumer response is,” Jones Anderson said.

A full-size pool is being installed to create a “Vegas-style pool party with cabanas.” Comedians will play on the comedy stage. An art experience is also part of the Kaaboo package. “We have a contemporary art collection at AT&T Stadium, and this will layer on top of that,” Jones Anderson said. “There will be a lot of visual interest.”

The signature Kaaboo festival concept of “the five senses” will feature indulgences such as salon treatments, facials, vitamin B IVs, massages, shaves and haircuts.

With a new layout and crowd flow, security had to be revised. “We are shifting how we bring in the crowds in and how we move the crowds,” Jones Anderson said. “There are vast amounts of people navigating from stage to stage.” Felts said clear signage is the key to crowd control.

One dollar of every ticket will go to the community. Recipients include the Yellow Rose Foundation and Musicares.

“Trying to be as inclusive to the community as we can is at the heart and soul of who we are and all the events we put on,” Jones Anderson said.

Kaaboo and AT&T Stadium have signed a multiyear deal.

“We are brand aligned. We value the same things, and creating new experiences is what we both do,” Jones Anderson said. “We are natural partners.”