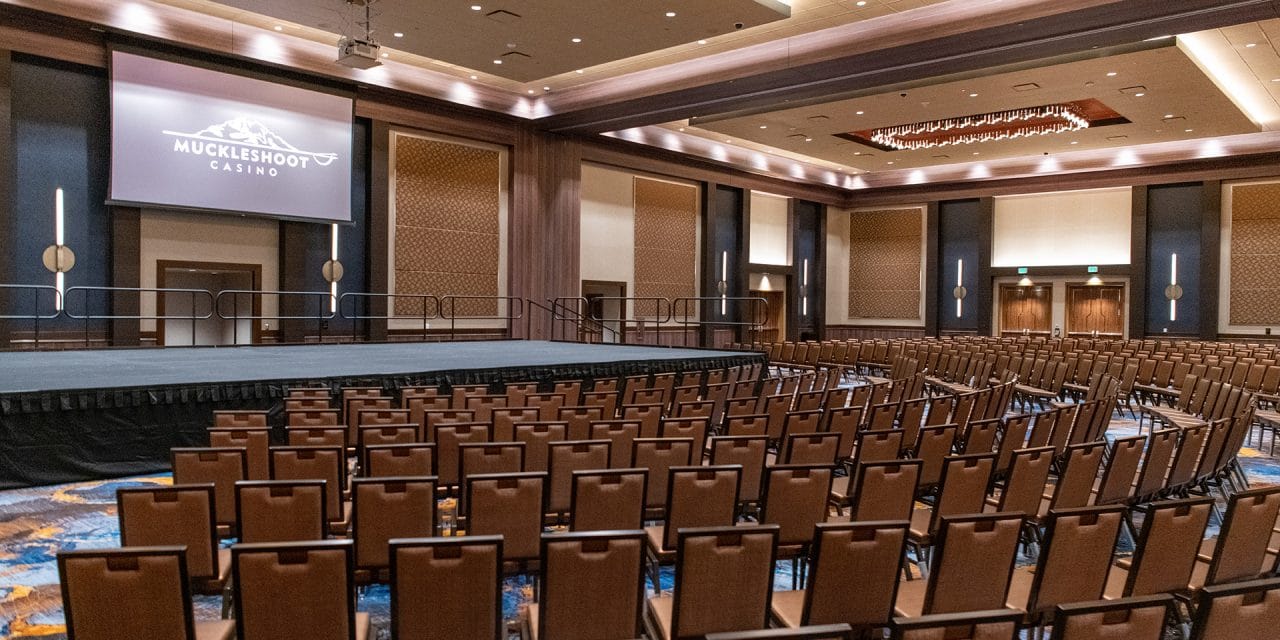 The new 20,000-square-foot space is ready to rock ‘n’ roll but will need to wait a little longer. (Courtesy Muckleshoot Casino Resort)

A September performance by Kool & the Gang will be the first show at the new 20,000-square-foot events center at the Muckleshoot Casino Resort outside Seattle in Auburn, Washington.

The Muckleshoot Events Center was developed at a cost of more than $60 million and was complete by March 2020, but has been idle due to the pandemic. Kool & the Gang had originally been scheduled to christen the space and will now do so on Sept. 8 and 9, if all goes according to plan, said Conrad Granito, the resort’s general manager, and Bob McCoy, its entertainment and production manager.

“The conversation about an events center or some type of entertainment venue really got serious about five years ago,” Granito said. The resort this year will mark its 26th anniversary.

The new room has two primary performance configurations, depending on whether the stage is situated along a long or a short wall in the rectangular space. In the short wall configuration, it can hold about 1,850 seated and an additional 2,800 standing. If the stage is along the long wall, the capacity is about 1,600 seated plus 1,000-1,200 standing, according to McCoy.

The multiuse center can be divided into five breakout rooms, giving the casino the ability to host multiple events, like trade shows and weddings, simultaneously. It can also be set up for mixed martial arts bouts staged in the round, McCoy said.

“We can have concerts. We can have banquets. We can can have fights, MMA, trade shows, small conferences,” Granito said. “At 20,000 square feet, it’s not overly huge, but it’s not tiny either.”

There are no plans to sign a naming rights sponsor at this time, he said, noting that sponsors have been aboard for individual shows and events in the past and will continue to do so.

Shows at Muckleshoot had been in a 500-capacity room, the Galaxy Club, inside the casino, which has staged live entertainment since the mid-1990s.

“We’ve done Rose Royce. We’ve done The Romantics, Flock of Seagulls, tons of tribute shows,” McCoy said, adding that the space saw a heavy dose of local bands, about two shows a month geared toward the region’s sizable Asian-American population, as well as some jazz nights and DJs.

“We were at one time bringing up Legends in Concert for 12-week runs once or twice a year,” he said. “We’ve done some pretty large magic shows in there as well as a few hypnotist shows. We’ve done a pretty good variety of everything.”

The resort is working with multiple promoters on bringing in MMA events to the new space, which has 64 rigging points that will satisfy the truss and lighting requirements for an in-the-round MMA ring, McCoy said.

Video walls can be set up on all four sides of the room, which is in the front of the resort, built where the casino’s valets once parked cars, McCoy said.

The resort worked with audio visual equipment suppliers Agility AVL out of Nevada and Washington-based live events company Promosa USA, according to McCoy, who said a considerable amount of field research went into the planning of the new space as he and others visited various venues, including some at other tribal properties and a local performing arts center.

“When we got the green light to go ahead, we went on a kind of research and development tour,” he said. “We toured as many properties as we could and looked at their events centers as saw as many shows as we could. We looked at everything: the front of house, how they were doing the rigging, how they were running their infrastructure.”

In some of the spaces, AV contractors had been brought in after construction was done, resulting in feeds being run across the floor or across the ceiling during shows.

“By witnessing what some of the other properties were doing, good or bad, we learned from that and decided we were going to have a high-voltage conduit (along with a low-circuit one) that runs from the front of house to the stage and we’re going to have access points along the way (in either the long- or short-wall configuration),” McCoy said. “We also put an access point in the center so if we put an MMA ring in there, we can come up from underneath. You’re not going to see a bunch of cables hanging off our ceiling. You’re not going to see cables taped to the floor. It’s all going to be neat and tidy.”

Other takeaways from the venue tour included putting in a washer and dryer and built-in communications units connecting dressing rooms and front of house, so the technical director can communicate directly with talent and others backstage.

“We took all the best ideas that we could afford,” McCoy said.

The space has two dock-high loading bays capable of receiving a 53-foot tractor trailer “and that’s maybe a 150-foot push to the events center,” McCoy said.

“We also have covered parking for a tour bus,” he said.

The resort’s closest direct competition is the Emerald Queen Hotel & Casino just east of Tacoma, about 10 miles southwest, which has an event center of similar size.

Steve Selak is the main talent buyer who booked the former performance space and will continue in that role with the new events center, said Granito. Most of the shows in the new space will be promoted in-house.

McCoy said he expects the resort to go after acts like Cheap Trick, Trace Atkins, Ken Jeong or even Jay Leno.

“Conrad and his team have supplied me with a very robust budget to book top-notch, premium entertainment that can compete with some of the largest properties anywhere,” Selak said. Other acts he has lined up include TLC, Warrant and Firehouse, and Morris Day.

The resort is slated to break ground in the next month on a 400-room, 18-story hotel that when complete, when it opens in 2023, will complete the vision of a casino destination that can draw multiday visitors and local or regional residents alike, Granito said.

“We’re still a regional property,” he said. “Nobody in Southern California or Denver or Salt Lake or Dallas is going to see us on TV and say, ‘Oh, my gosh, I’ve got to get on a plane and go to Seattle and go to Muckleshoot,’ but if you’re a four- or five-hour drive (away) and want to have a little longer weekend or, “Oh, my gosh, Ken Jeong is going to be there. Yeah, I’ll drive over. I’ll get a room.’ That makes sense.”