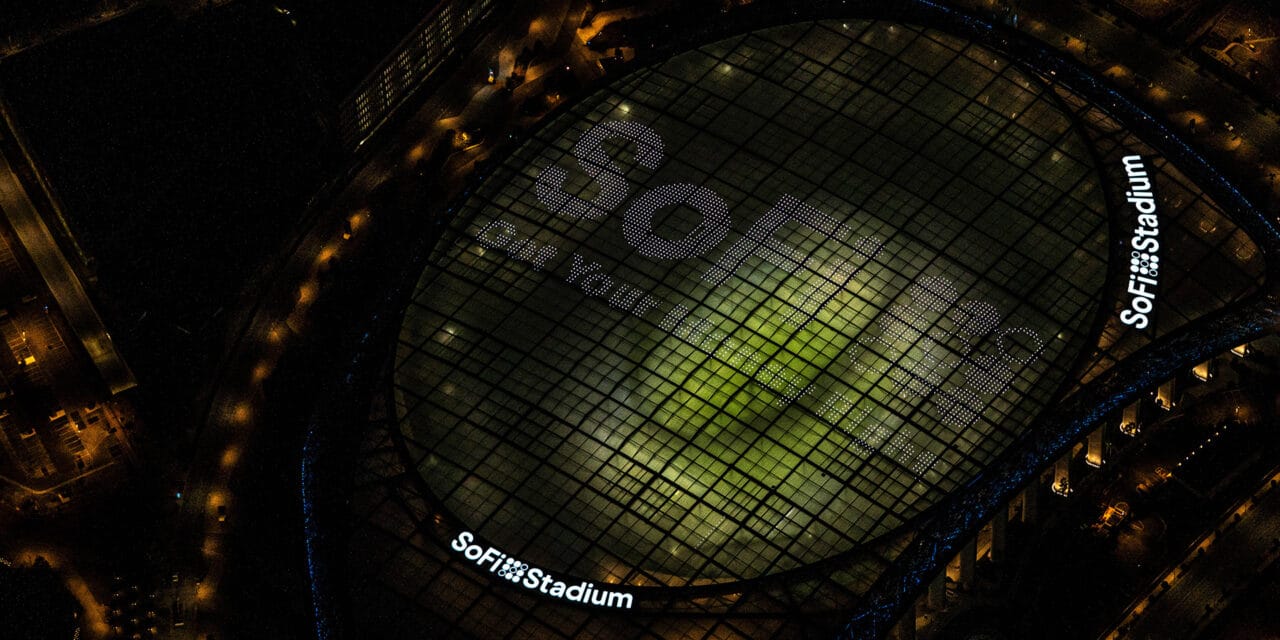 CONTROLLING THEIR OVERHEAD: SoFi’s brand is often seen on the stadium roof, but the system can display video of what’s going on inside. (Courtesy Saco Technologies)

At SoFi Stadium, display puts on a show for air passengers

SoFi Stadium’s 20-acre roof is essentially a giant LED display and serves as a key piece of inventory for a building that sits beneath a flight path to Los Angeles International Airport.

It’s the next step in LED technology, and it allows the NFL home of the Los Angeles Rams and Chargers to display images and messaging that moves across 26,000 pixel (lights) attached to the roof surface.

As they were searching for that special something, officials with HKS and Walter P Moore, SoFi Stadium’s architect and structural engineer, introduced the facility development team to Saco Technologies.

On his own, Hedinsson was aware of the Burj Khalifa, a Saco project. The building in Dubai, the world’s tallest, stands 2,717 feet high, its exterior bathed in LED lighting with more than 1 million pixels attached.

“We always had this idea that it would for all intents and purposes be a large LED sign,” Hedinsson said. “What we didn’t realize was just how flexible it was. We can put animation, moving pictures and full color on it. In that respect, it’s just another display.”

The roof display is integrated into the stadium’s content management system used to run all LED displays at SoFi Stadium, extending from Samsung’s center-hung board to ribbon boards in the seating bowl and other LED signs across the 300-acre retail and entertainment district.

“It’s very impactful,” Hedinsson said. “What Saco does really well is the technology, from an interface perspective, is very simple to integrate. It is essentially an HDMI cord coming out on the other end, which is familiar to anyone doing content and audio-visual components.”

The technology allows SoFi Stadium to experiment with running parts of live broadcasts on the roof of events going on inside the facility. It was done for “Monday Night Football” in 2020 and “Vax Live,” a May 2 concert to raise awareness for COVID-19 vaccinations.

“It acts as a video screen even though the pixels are 5 feet apart,” said Yanick Fournier, Saco’s senior vice president of business development. “It’s not high-definition or 4K. But it’s a huge canvas and when you’re seeing it from a plane, it becomes a high-resolution (display) and you can picture the image as you’ve seen on TV watching an NFL game.”

The roof display also provides opportunities to flash images of naming rights partner SoFi’s brand, which it has done over the past several months, and some of the stadium’s other major sponsors

In that respect, Fournier said, teams have the ability to recoup their investment in the LED technology by selling advertising space on those exterior displays.

“The owners know they can do that,” he said. “We have a media collective team that can take logos and make them look good based on the quantity of pixels on the venue. It could be as easy as (placing a) Budweiser Super Bowl ad. It could work at SoFi because of the pixel dimensions.”

Hedinsson sees lots of potential for the roof display as the broadcast and production team at SoFi Stadium’s massive control room grow acclimated to the technology and what it can do that makes the most sense for the facility.

Stadium developers worked closely with the Federal Aviation Administration to ensure the venue would not interfere with aircraft landing at LAX, which led to the foundations being put 100 feet into the ground. Hedinsson said it ultimately changed the shape of the stadium. The sloping roofline tied to cutting-edge LED was a creative way to showcase the architecture, especially at night.

“I’m really bullish on LED technology, period,” he said. “As you think about how to get effective messages across to your fans, it’s a clever way to innovate in that space. It doesn’t have to be the 16-by-9 television screen that you put on the side of the building to be impactful.”