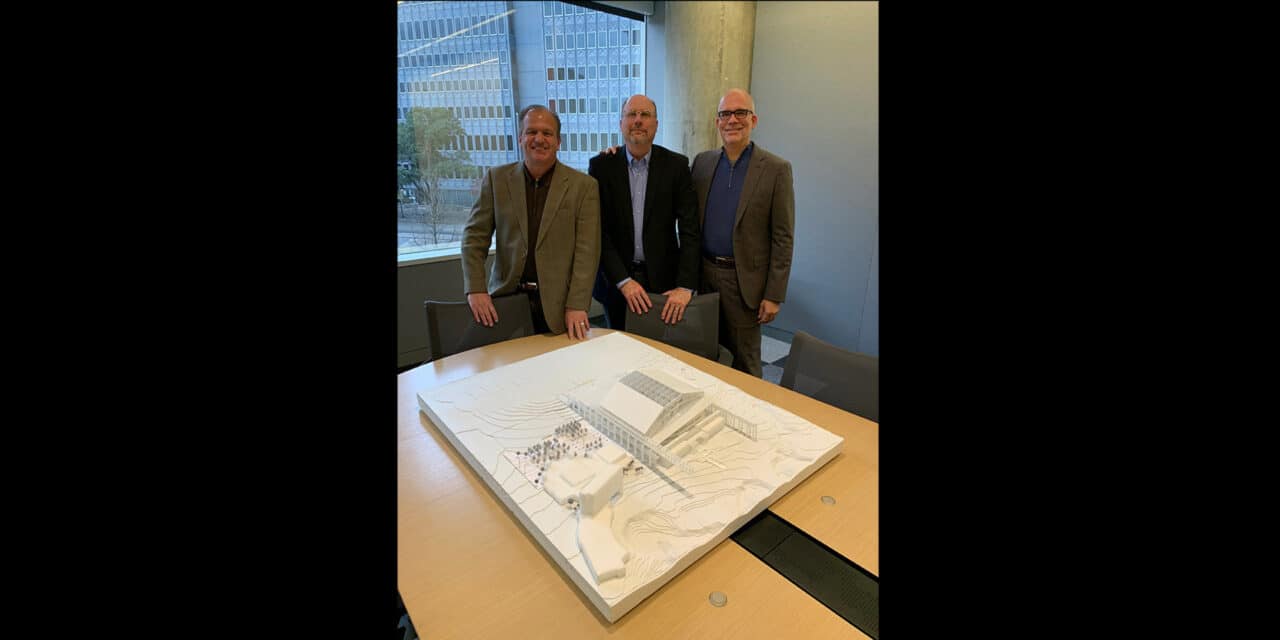 Sports designer Bryan Trubey has played a critical role in the development of arenas and stadiums over the past 35 years, including four of the six newest NFL venues. Trubey is no longer employed by HKS, but he’s not ready to shelve his sketch pad just yet.

It’s been an impressive run. Trubey, most recently HKS global director, principal and executive vice president, spent 29 years at the Dallas firm and launched its sports practice in 1992. The company became a leader in the development of facilities at sports’ highest level.

Over the past 15 years, he helped expand HKS’ business internationally to Europe, Asia and the Middle East.

HKS provided a statement to VenuesNow: “Bryan Trubey has left HKS. During his tenure, Bryan helped build a thriving sports and entertainment practice and developed some of the best talent in our industry. We are grateful for his many contributions and wish him well.”

Trubey, 60, declined to discuss the details of his departure. Mark Williams, a 25-year HKS veteran, will take over the sports and entertainment practice, company officials said.

The announcement came as a surprise to Trubey’s industry colleagues.

“I’m shocked,” said Chris Lamberth, head of sports and public assembly at Tvsdesign and who spent three years at HKS working with Trubey. “No one else has (actively) done more NFL stadiums. They’re a force. They’ve been doing it for a while now, and why would you change that?”

At the same time, all big firms go through change at some point, Lamberth said. It’s happened to sports design firms such as the old HOK Sport, Ellerbe Becket and 360 Architecture, whether it’s through consolidation or as older architects retire.

The pandemic has thrown another wrench into the mix during the shutdown of sports and entertainment, forcing teams and those operating in the business of public assembly to make difficult decisions to stem the tide of huge financial losses.

From the tone of his voice and his comments in an interview with VenuesNow, Trubey is not ready to retire and is eager to start a new chapter in his professional career. He wouldn’t tip his hand on whether he would start his own practice or join an established firm. He’s keeping his options open.

“My best work is ahead of me, and I have a clear vision of what I want to do. I’m really just getting warmed up,” Trubey said. “I’ve seen plenty of my peer group go through transitions. I was lucky to have probably the most stable career in the business outside of a couple of my longtime friends at Populous like Earl Santee and Dennis Wellner.”

For Trubey, the journey in sports facility development started at the old HOK Sport (now Populous), where he worked alongside Wellner, Chris Carver and Joe Spear from 1989 to 1992. At the time, Trubey was working on the national stadium in Hong Kong, which opened in 1994.

Miller Park (now American Family Field), home of the Milwaukee Brewers, and American Airlines Center, where the NBA’s Dallas Mavericks and NHL’s Dallas Stars play, opened for business in the early 2000s. Both were HKS projects.

On its own, American Airlines Center, a $412 million development, has stood among the crown jewels of big league venues over the past 20 years.

Brad Mayne, president and CEO of the International Association of Venue Managers, was part of the operations team developing American Airlines Center before he ran the building for 14 years. Mayne worked closely with HKS and Trubey as the arena project took shape.

High-end finishes, 240 suites, underground loading docks and  larger arena floor to accommodate all events were all signature elements HKS incorporated to drive revenue in one of North America’s busiest venues.

Trubey, in conjunction with Center Operating Co., the joint venture representing the Mavs and Stars, pushed for those innovations to resolve logistical issues for a multipurpose facility, Mayne said.

“One of the things that we really worked hard on and knew was going to profit us was to do multiple events on the same day,” he said. “We made sure that we could convert in a two-hour timeframe to have a hockey game and a basketball game on the same day, opening up dates for other events.”

“Bryan was a different type of architect,” Mayne said. “He was an entrepreneur at the same time he was really good with taking responsibilities for the design of facilities.”

In 2004, a defining moment for HKS came under Trubey’s leadership.

The Dallas Cowboys selected the firm to design a cutting-edge, billion-dollar stadium. It contained the NFL’s first center-hung videoboard and a wide variety of premium seat products, plus standing-room platforms in the end zones for the budget-minded fan.

The building, now AT&T Stadium, has influenced many sports venues since it opened in 2009.

Over the next decade, HKS became the architect for three NFL projects: Lucas Oil Stadium in Indianapolis, U.S. Bank Stadium in Minneapolis and, most recently, SoFi Stadium, a massive $5 billion development serving the Los Angeles Rams and Chargers in Inglewood.

“Bryan rolled up his sleeves and was hardcore after Cowboys,” Lamberth said. “He wanted to win and is super-competitive. Getting the Cowboys was the momentum builder that led to everything else. That’s what started the roll for HKS and it kept moving right along.”

Years later, SoFi Stadium stands as the crowning achievement for both HKS and Trubey. It’s three venues in one, he said, extending to the American Airlines Plaza, a 125,000-square-foot outdoor space, and a 6,000-seat performance venue. Both sit next to the stadium.

“That building is part of the long line of progressive venues where many times you’re dealing with the same set of issues,” Trubey said. “You can tie a lot of what is going on at SoFi at large to things that I was thinking through as a younger man working on Hong Kong and American Airlines Center, in terms of the bowl configuration.”

He said, “There are many ideas like that in terms of transparency and openness and structural expression, which of course you see done monumentally on SoFi in a horizontal manner, but also vertically, like Cowboys and Vikings.”

Trubey sees international sports development as a big opportunity in Latin America, Europe, the Middle East and China. Those are markets he’s pursuing as part of his next move. Under his separation agreement, Trubey is free to pursue new projects in which HKS is not involved.

Mixed-use tied to sports development has been a big trend over the past 20 years, and that’s also something Trubey will focus on after being part of master plans for both SoFi Stadium and Globe Life Field, the Rangers’ $1.2 billion ballpark that opened in 2020.

SoFi Stadium is the anchor for a 300-acre development spearheaded by Rams owner Stan Kroenke.

In addition, Trubey wants to push for architects to gain a greater financial stake in sports projects they’ve worked on beyond filling the role as project designer. It involves a shift in the business model for architects to participate in the long-term value of arenas and stadiums that now typically cost billions of dollars to construct.

“Architects, through intellectual property, can find themselves in equity positions in projects, to bring real change to the overall industry,” he said. “They should have the same rights as artists, authors and musicians have to their work. We’re behind in that regard, but we’re just as influential in our profession. That’s what’s so crazy about our business. We create these things with enormous value but we don’t retain any interest in them.”