LEVEL UP: Premium Space Offers More Choice Than Ever

GET IN THE GAME: The Minnesota Vikings’ Turf Suites at US Bank Stadium offer field-level views just feet from the sidelines and team bench. (Courtesy venue)

Sodexo’s Wooden: Amount of premium space is on the rise, but it’s segmented

Premium seat sales comprise an ever-greater slice of the venue revenue pie, according to experts in the field, a bright spot in a year with soaring inflation, labor shortages and overall economic uncertainty.

“It is growing,” said Chris Bigelow, founder of longtime concessions consultancy The Bigelow Companies. “The percentage really depends on how much premium area there is.”

Eric Wooden, Sodexo Live! Hospitality Solutions Group senior vice president, said the amount of premium space is on the rise, but it’s segmented, and the type of offerings is changing.

“Especially in new builds, our partners are offering more types of premium service than ever before,” he said, noting that previously the only type of premium was a suite ticket. “For the longest time, you could have a general admission ticket, a club seat or you could be in a suite. Now, in some buildings, there are as many as eight, nine, 10, 13 levels of premium. It’s becoming more and more important to our clients and our fans.”

Bigelow points to the college level as an example.

“There’s the super-premium club for the lifetime donor to the university and it’s pretty much anything you want,” he said. “The choices are fewer as you go down in price with fewer cooked- or carved-to-order options and more prepackaged items. The exclusive ones are still very exclusive.”

Bigelow says the days of the season ticket, whether it’s in general seating or premium, are coming to a rapid close.

“Nobody wants to commit for a full season, and they are willing to pay a lot more for on-demand. ‘I want a suite. I want it three times a year and I’ll pay extra, but I can’t fill it up every day.’ And that’s true of the club seats,” he said. “The club seats replace suites anyway. The suite market is, I don’t want to say dead, but it was dying. How many buildings have eliminated suites and built giant clubs by taking eight or 10 suites?”

There are, however, added costs associated with selling inventory in such flexible ways as opposed selling it on a 10-year term, Bigelow said.

“Everyone wants what they want, when they want it, how they want it,” said Association of Luxury Suite Directors President Amanda Verhoff. “This doesn’t have to mean knocking down walls (though it can), but instead can mean changing the experience, and offering more exclusive benefits.”

Wooden said corporate sales are still the lifeblood of the premium segment, but to a lesser degree than in the past.

“We’ve designed with our partners premium areas for people who don’t want to spend $150,000, or whatever the number is now, on 12 or 18 tickets for a suite, or can’t necessarily be on a club level but desire smaller spaces throughout the building where you can buy one or two seats, or there’s a party suite where you buy one or two seats in a suite that has 40 people and you don’t know anybody else,” he said.

Premium clients are increasingly given the opportunity to resell inventory as a renewal incentive, according to Verhoff.

“We also know that many clients simply cannot commit to a baseball or basketball schedule worth of suite usage,” she said, citing products like SuitePro by Suite Experience Group, or FEVO as a social sharing/buying option. “There has to be a clean way for clients to share, resell, or utilize premium differently.”

Bigelow notes the accelerating growth of what he’s called, “The Everyman’s Club.” 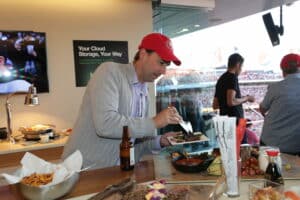 EVERYMAN CHOWS DOWN: The suite and club experience is no longer the exclusive purview of the well-heeled. The fanciest options are as luxe as ever, but with so many levels offered, even the hoi polloi can enjoy a taste of VIP treatment, premium space operators say. (Courtesy San Francisco 49ers)

“They’re areas that are developed like private clubs. They look like clubs, they act like clubs, except anybody on that concourse can go into it,” he said. “People love that. It’s got comfortable furniture, all the televisions, a lot of bartenders. That is becoming huge.”

The desire to connect with other people, be it for business, pleasure or both, is a major trend among today’s event going public and it’s prevalent even at some of the most exclusive levels of service, and it isn’t going away any time soon, Wooden said.

“Increasingly primary suite meals are a buffet outside the suite,” he said. “When that happens, you see a lot of suite doors remain open the whole time and people move in and out of one another’s suites. They feel comfortable doing it. It’s an inclusivity/exclusivity kind of thing.”

Another trend on the sales side is automating the process to all but remove the human touch, Bigelow said.

“Young kids these days, they don’t want a salesperson calling them and trying to bring them to a building, they want to do it all online and the buildings have had to adapt,” he said. “A lot of companies are trying to develop software so I can go online and book my entire event without ever talking to a human being, I’ve heard from many people, for the younger demographic, that’s what you have to do.”

“Text is also growing as a sales method,” Verhoff said. “It’s a way to cut through the clutter from emails and cold calls. It’s the preferred means of communication by certain younger demographics now. There are many text options out there such as Vozzi, TextUs, and others, who are working with teams for sales, and also for text assist with safety, service, and more.”

Sodexo Live!, meanwhile, is working with partners on away game premium packages, Wooden said. He also predicts ever-more carefully curated premium experiences for guests that begin the moment they leave home, so they hardly have to think, much less worry, about how their game or event day is going to play out.

SERVICE (AND SAFETY) WITH A SMILE

On the hospitality side, trends in the venues premium space today look  vastly different from 2.5 years ago when the pandemic turned the industry on its head and it seemed carving stations and buffet lines would go the way of the dodo.

Even the rush from sealed-off suites to communal clubs was subject to safety-centered second-guessing. 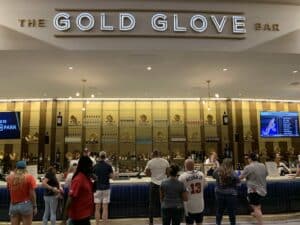 FLASHING THE LEATHER: The Gold Glove Bar inside the revamped Delta Club at Truist Park showcases Atlanta Braves hardware along with a plethora of beer, wine and craft cocktails. (Courtesy venue)

While some practices from the hermetically sealed days of the contagion have been deemed best practices and will remain, posh offerings in ever-more social settings are trends that show no signs of slowing down, according to several operators in the premium sector.

“I was just in a building the other day and I said, ‘You know, guys, you need to take down all this plexiglass shit you’ve got up in the club area. Nobody is using that anymore,” Bigelow said. “They go, ‘You gotta be kidding me.’ They’re an independent building, so they don’t have others they talk to that much. I said, if the clientele wants it, that’s different but, realistically, it’s over, man.”

That’s not to say COVID-19 is over completely but, as new variants prove less deadly, protective measures, including mask-wearing, have become spotty at best.

“Everybody took a lot of steps, as needed,” added Wooden of Sodexo Live!, a leader in the space. “The pandemic was a scary time, so responsible people did responsible things.”

Jeff Morander, ALSD CEO and former executive vice president with the NHL Ottawa Senators, said teams and tenants reacted to immediate safety concerns while at the same time planning “numerous scenarios from capacity to valet parking to ingress/egress to socially distancing to different food and approaches.”

Some individual service practices will remain, such as spruced-up display cases for bottled water, beer, wine, hard seltzers and soft drinks in suites and club areas for those who want to get back to their seats quickly.

“That was around before,” Bigelow said. “At all these clubs, you see big candy walls and everybody’s grabbing this stuff.”

Wooden likens it to going on a strict diet after a heart attack and then maintaining some elements as long-term diet best practices.

“That’s what this is. We’re back to normalcy, but we still have a diligent eye on making people feel comfortable and safe in every environment,” he said. “The main takeaway is, If anyone wasn’t doing the right thing before, we certainly all are now.”

Verhoff said that during later phases of the pandemic when fans were permitted in venues again, premium spaces were seen by some as safer, private areas where only guests who knew one another congregated.

“This likely allowed some fans to see premium areas they may not have before,” she said. “Some clients may have been able to experience a premium product and may have liked what they saw, leading to more interest in premium post-pandemic.”