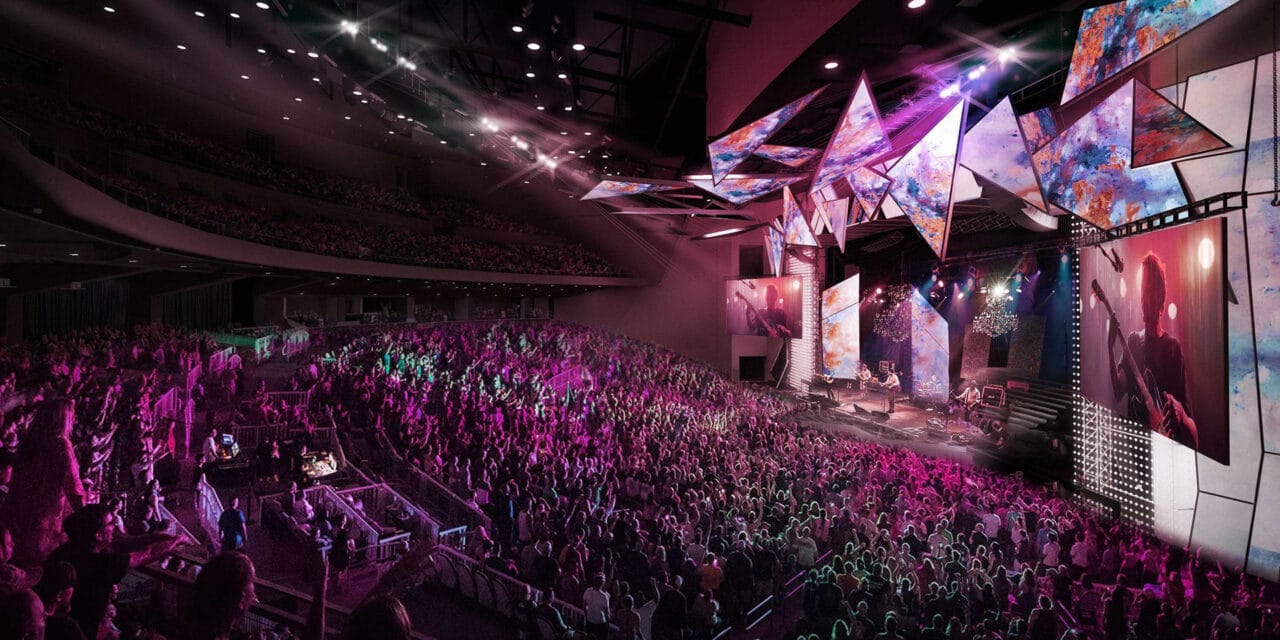 Live Nation has made an exclusive, multiyear booking agreement at the new, 6,000-seat performance venue at Hollywood Park, the 300-acre sports and entertainment development in Inglewood, California, that includes SoFi Stadium and is being developed by Los Angeles Rams owner Stan Kroenke.

“The Performance Venue at Hollywood Park is a sophisticated, intimate venue that will host a wide range of world-class events, including celebrated musicians, immersive entertainment, and close-knit community gatherings,” Christy Castillo Butcher, SoFi Stadium and Hollywood Park’s senior vice president of programming and booking, said in the announcement. “Hollywood Park is a true sports and entertainment destination, and our partnership with Live Nation will help us further our goal to deliver extraordinary entertainment to Angelenos and visitors across the globe.”

The theater, which is to completed in summer 2021, will host a variety of live entertainment from concerts to comedy, award shows, esports competitions, community events, conferences and more. Live Nation will be the exclusive long-term promoter for the theater.

“We couldn’t be more thrilled to be the exclusive promoters of this incredibly dynamic venue coming alive in Los Angeles,” said Rich Best, Live Nation’s regional head of talent for California. “Alongside Hollywood Park, we plan to make this a must-visit live entertainment venue and we can’t wait to unveil what is in store for this unique space.”

The Performance Venue is a 227,000-square-foot, three-story indoor venue situated under the same roof canopy as SoFi Stadium and American Airlines Plaza, equipped with its own three-bay loading dock, meaning it can operate independently or in conjunction with the stadium and plaza. The theater is set up for three crowd capacities: 3,400, 4,400 or full capacity at 6,000.

The live entertainment and sports scene in the city just southwest of Los Angeles remains crowded. The Hollywood Park development, which includes the 70,000-seat home of both the NFL’s Rams and Chargers and the soon-to-be-active seated, indoor multipurpose theater, is not even a mile from the Forum arena, one of the most active concert venues in the U.S.

With Los Angeles Clippers owner Steve Ballmer’s intent to construct a new arena for the NBA team just south of the Hollywood Park development, the project faced legal action from the MSG side seeking to prevent construction, to which Ballmer countersued alleging anticompetitive practices. Ultimately, Ballmer bought the Forum for a reported $400 million, ending the lawsuit.  Construction on the new basketball arena is expected to begin this summer.

Meanwhile, the Lakers recently agreed to a 20-year extension to continue playing at their longtime home court at Staples Center in downtown Los Angeles.

This story originally appeared on Pollstar.com and has been updated since it was originally posted.