Lubbock Has a New Star With a Familiar Name 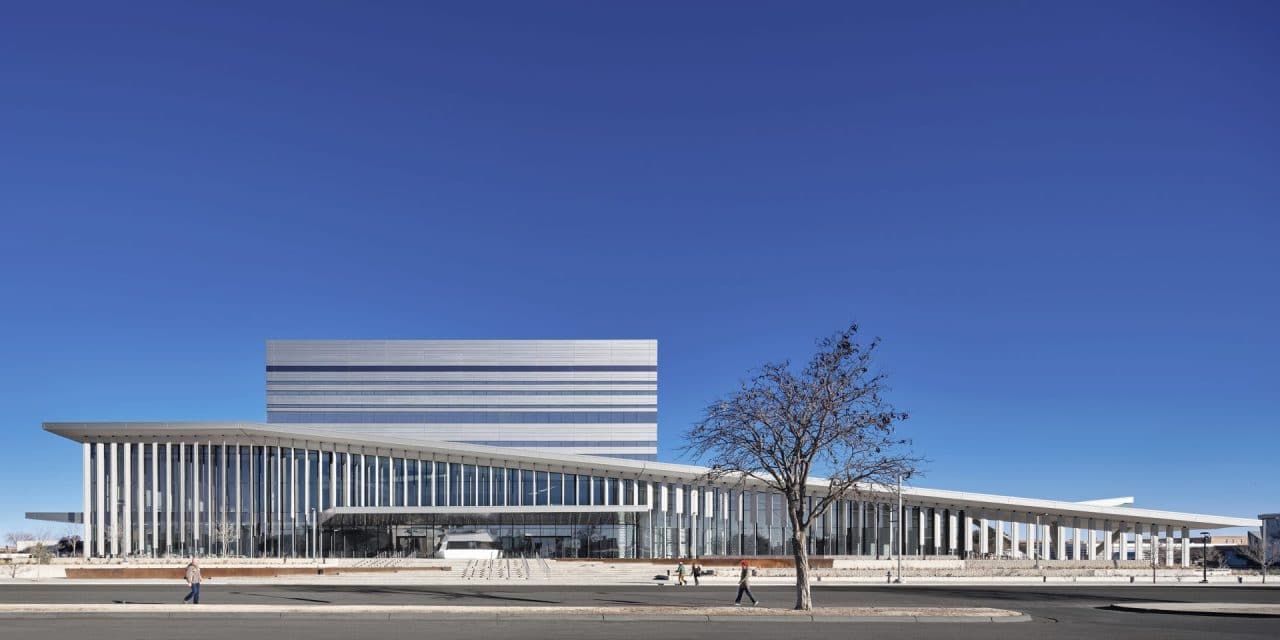 The nonprofit association that owns the new Buddy Holly Hall of Performing Arts and Sciences is betting the state-of-the art facility will give downtown Lubbock, Texas, an economic boost and serve as a draw for a variety of touring acts now that the $153 million facility, named for the city’s famous favorite son, has opened.

The venue — which consists of the 2,297-seat Helen DeVitt Jones Theater (named for the late local philanthropist and champion of the arts), the 415-capacity Crickets Theater (named for Holly’s band), plus a 6,000-square-foot multipurpose space — made its debut Jan. 23 with a performance by the Lubbock Symphony Orchestra.

The privately financed facility, whose completion was delayed about nine months due to the coronavirus pandemic but which came in on budget, also includes Rave On (named for the Holly-recorded hit), a restaurant with about 100 seats inside and room for an additional 50-60 outside.

The 220,000-square-foot hall, which is owned by the Lubbock Entertainment and Performing Arts Association and was developed by Garfield Public/Private LLC, has been in the works for nearly 10 years, according to LEPAA Board Chair Tim Collins.

“Garfield was the developer of the Durham (North Carolina) Performing Arts Center (which opened in 2008),” said Collins, whose involvement began in 2011 as incoming chairman of the Lubbock Chamber of Commerce, after a local foundation asked the chamber to lead a feasibility study. “In 2013 a nonprofit organization was formed to begin the process in earnest and Garfield was retained as the developer and we set about hiring architects and designers and the specialty consultants who would help us to bring this project to fruition.” 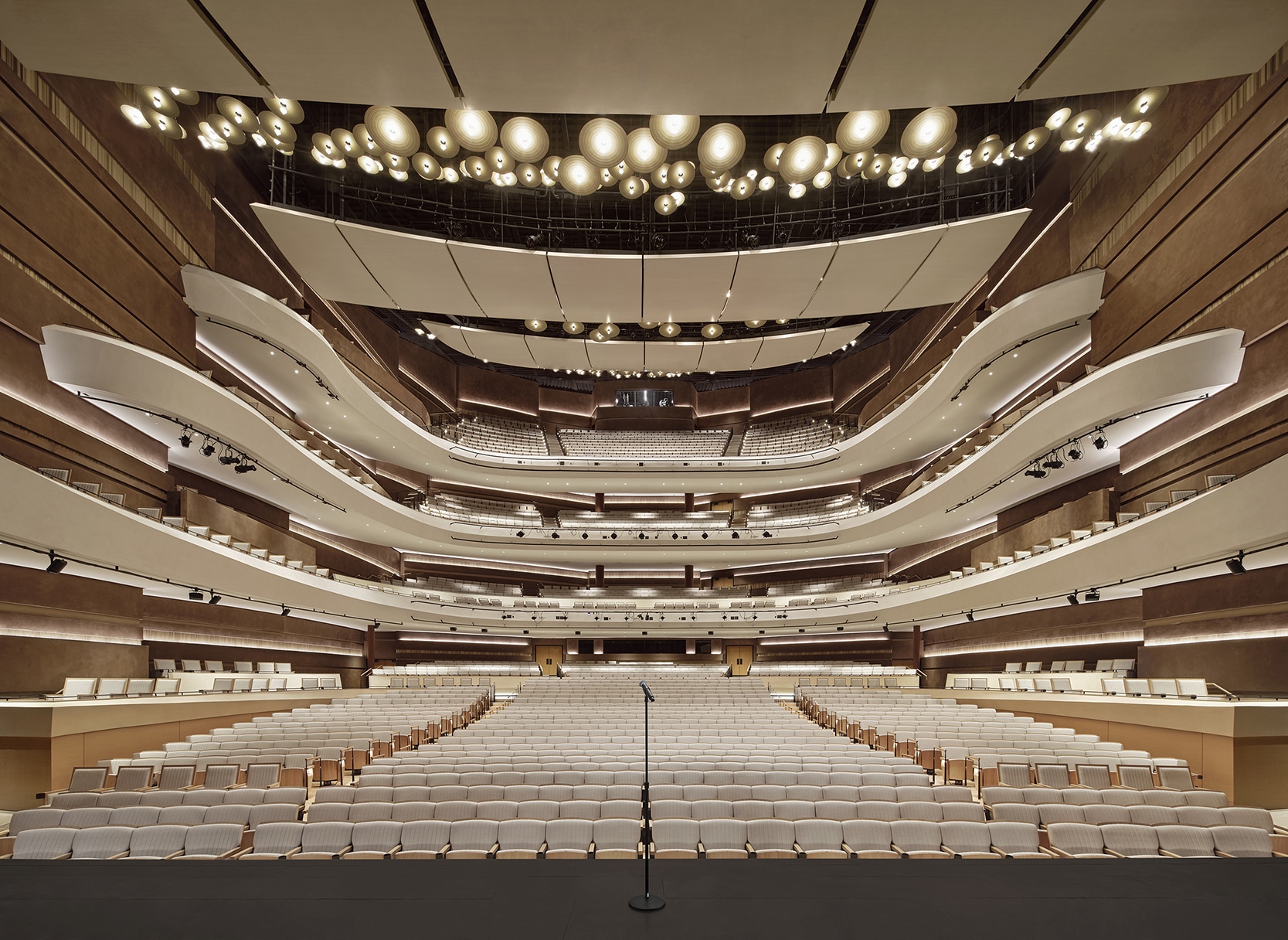 The site, which previously housed a Department of Public Safety building where Collins got his first driver’s license, was granted to LEPAA by the city, which had previously been granted the property by the state, Collins said.

Demolition of the DPS building took place in 2014. Ground was broken for the new hall in 2017 with Lee Lewis Construction as general contractor.

Diamond Schmitt Architects designed the building, which is operated by ASM Global with Charlton Northington serving as general manager. Parkhill and MWM Architects also played a role, along with acoustician Jaffe Holden. Theater planning, design and technical systems integration was by Schuler Shook, which also conducted feasibility studies beginning in 2012 for the project.

Charlton, a veteran manager of entertainment and convention facilities, is a graduate of Texas Tech University, the largest of several colleges located in or near Lubbock.

The food and beverage and catering operation, including Rave On, is handled by United Supermarkets, once a regional chain based in Lubbock and now a division of Albertsons Companies Inc.

The theater features an orchestra area that can be converted from tiered fixed seating to a flat floor with room for about 900 standing people and an expandable lobby named for the late Christine DeVitt, a philanthropist and benefactor, like her sister Helen, of Texas Tech.

Collins said the now-completed venue compares favorably with the vision city leaders had for the project as it evolved.

“Everyone that’s been involved with (the project) is truly stunned to walk in and see that vision being realized and now we’re challenged without a doubt to live up to the expectation that we all placed on this building,” he said. “The building is not simply a performance hall. Being privately funded, we recognized pretty early (along with) some of the people that were involved in developing proformas, Duncan Webb out of New York, in particular, that performance halls typically don’t break even under most circumstances, so we were challenged in the fact that we didn’t have some type of tax support, to figure out how we could operate the facility and stay as close as possible to operating in the black.”

So, local rent-paying partners — the Lubbock Independent School District and Ballet Lubbock Pre-Professional Dance Academy among them — were brought in and the scope of the building, including the addition of the Cricket Theater, was expanded.

Nicknamed the Hub City, Lubbock has a population of about 275,000 and a metro area of around 325,000, Collins said. It’s a regional tourism hub and the new performing arts center along with its tenants and users, should help add some economic vitality to the downtown area while at the same time making Lubbock an attractive stop for touring Broadway productions and major musical acts of all genres and provide a place as well for emerging local and regional acts to play.

Collins said the next Buddy Holly is out there, just waiting to make his or her mark and the educational programs housed at the hall may well help them emerge.

“We just have to create a pathway for that person to find their way,” he said, adding that the venue also creates opportunities for learning rigging, lighting, stage management and other behind the scenes aspects of live performances.

As for making Lubbock more attractive to touring acts and shows, Collins said Schuler Shook was integral in helping LEPAA to understand that what’s behind the curtain is as important as what and who is on stage and what it would take to make Buddy Holly Hall a perennial tour stop.

“We haven’t had a facility like this available to us in Lubbock for many years,” he said, noting that the 8,344 capacity Lubbock Municipal Coliseum (aka City Bank Auditorium) was demolished in 2019. “We weren’t on the radar for Broadway. We weren’t on the radar for the type of touring production that would come out. We have a 15,000-seat basketball facility on the Texas Tech campus, so you’d get Metallica. We had Garth Brooks here 2 ½ years ago. Sold the 15,000 seats out five times. Of course, country music and Texas kind of go together, but you put the right event here and people are going to come.”

“One of the things we knew we wanted to do in this facility was give a place that touring productions, including the large Broadway touring productions, would be able to perform and perform in their entirety,” she said. “In some small towns sometimes the whole production doesn’t make it onto the stage and we wanted this to be a house that could really produce all of that. Another thing that was important was embracing the Lubbock Symphony Orchestra, who had been performing at the Civic Center, and giving them a venue that would really support them acoustically and let them show off their talents.”

As they went through programming, they also considered the large college community in Lubbock and demand for popular acts, including comedians. That helped shape the notion that flexibility and convertibility were needed so the main theater could achieve a concert-style atmosphere by using a custom-designed system of seating wagons (actualized by Staging Concepts) to create open floor space for not only shows, but gala events with tabletops, she said.

The hall has two lifts that allow the stage area or seating capacity to be expanded or shrunk, she said.

Collins said the hope is that “touring producers will come see the building, use the building, have a great experience, go back and say, ‘We want to go there again. We want to make sure that we get to come back to Lubbock because they do things well and they have a facility that’s unlike a lot of others.’”

“I hope that’s the case and certainly it’s our intention to not be a city that people just look past,” he said. “Again, 75,000 tickets to Garth Brooks. There’s nothing that tells me we can’t host a full sellout show of ‘Les Mis’ or ‘Lion King’ or ‘Hamilton’ or whatever when those things can consider routing here.”