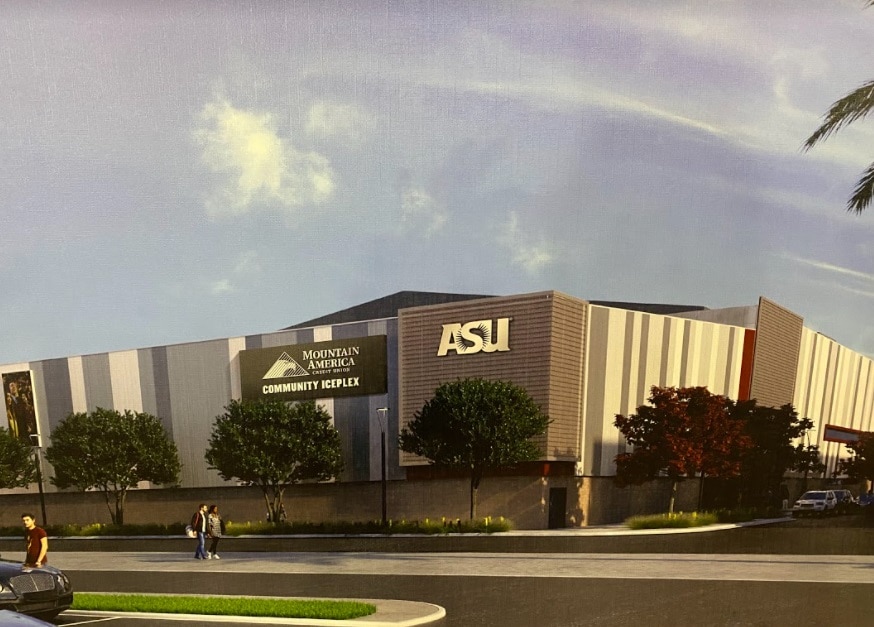 ICY HOT: Mountain America will place its brand on the community iceplex next to the new Arizona State University hockey arena. Both facilities open this fall. (Courtesy Dan Griffis)

Mountain America Credit Union has signed a naming rights deal for a community iceplex next to the new Arizona State University hockey arena under construction in Tempe.

The agreement is a 10-year term valued in the low seven figures annually, sources said. The credit union has more than one million members and $14 billion in assets with more than 100 branches in six states.

The official name is the Mountain America Community Iceplex at ASU. Both the arena and the iceplex open this fall.

The iceplex serves as the practice facility for the ASU men’s hockey team. It will also be open to the local community for youth and adult hockey leagues. The building encompasses a 200-foot-by-85-foot ice rink with seating for 185 people. Total capacity is 300.

“This is the right deal for them,” Griffis said. They get access to college students as they figure out their banking needs after they graduate from ASU. It’s a good first step.”

Elsewhere in the market, Mountain America is an existing sponsor of the Arizona Coyotes. The NHL team signed a deal to play the next few years at the ASU arena while their Tempe arena project is in development.

Mountain America’s activation extends to the ASU hockey arena, where the credit union will brand a Zamboni and have its logo placed on dasher boards and embedded in the ice. The credit union also gets use of a suite at the arena.

ASU is negotiating with a philanthropic donor to name the 5,000-capacity arena, Griffis said.

OVG brought a few potential naming rights partners to the table for the arena itself, but ASU prefers to name it for a person important to the university, he said.

For Griffis, the iceplex deal marks the 14th naming-rights agreement he has closed over the past five years as OVG’s top sponsorship executive.