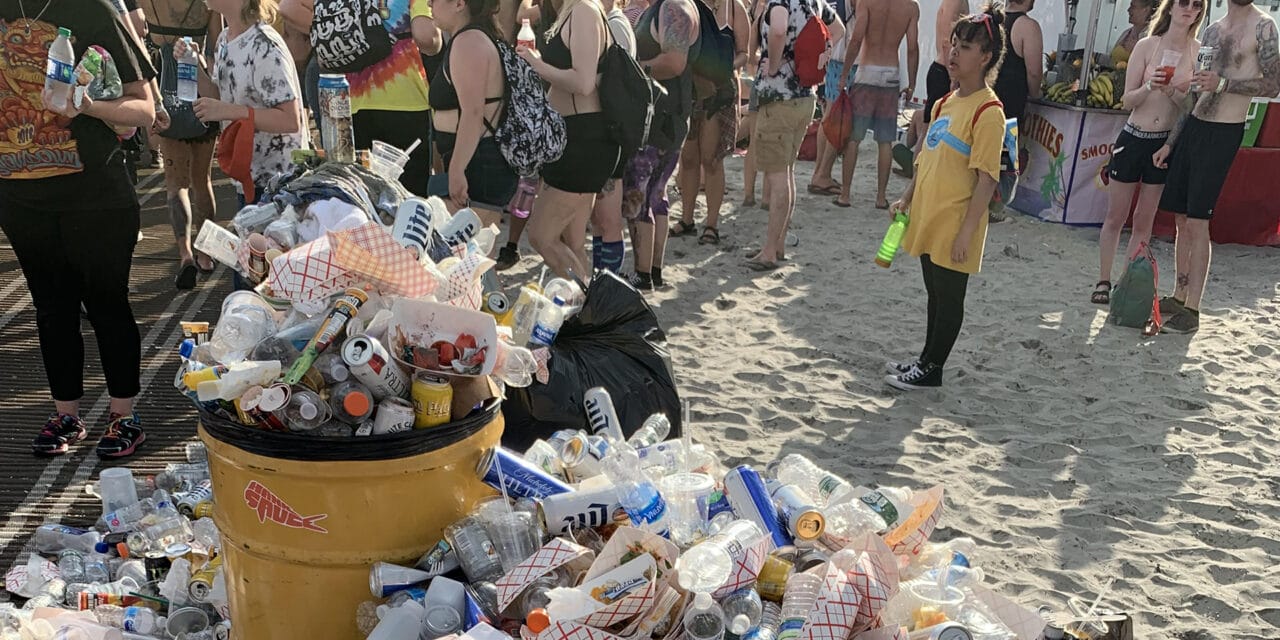 ADDRESSING A PILE OF PROBLEMS: Zero waste is a hot topic in the music industry, but differences in recycling among states makes things difficult for tours and festival organizers. (Courtesy MSA)

‘We may be competitors in other areas in our professional lives, but not in this’

A lot of passionate artists and music executives are making strides individually to make touring and live events as climate-friendly as possible, but without greater collaboration the business won’t be able to meet the challenges threatening the industry and planet. Enter the Music Sustainability Association — an inclusive, member-driven association that aims to make the industry not only more sustainable but just and equitable by bringing music industry professionals together to amplify, implement and innovative systemic solutions.

While the concept for the Music Sustainability Association was conceived by Michael Martin — producer of the National Earth Day Concerts as well as CEO and founder of boutique consultancy Effect Partners and r.Cup (a rentable, reusable cup for concerts and sports events) — he wants to make it clear that MSA isn’t his organization but the music industry’s and that he is just one of many people pulling this together.

Two of the fellow members of the organizing committee — tour/production manager Joel Eriksson and sustainability specialist Jennifer Regan — spoke to VenuesNow ahead of the official launch of MSA happening at VenuesNow Conference in Seattle Oct. 21-22.

“There’s a lot of great initiatives happening … a lot of conversations that are super promising, but at times it is relatively siloed. The aim with all of this is to try and break that wide open so everything that is already being done and everything that will be done in the future can be shared because really there’s no competition in all of this,” said Eriksson. “It’s only one shared end goal. We may be competitors in other areas in our professional lives, but not in this.”

Eriksson, who is managing the MSA organizing committee and works with artists including Andrea Bocelli, Shania Twain and FKA Twigs spoke Oct. 11 while working on Bocelli’s production at Milwaukee’s Fiserv Forum.

Regan, who is the senior vice president of sustainability at Effect Partners and the principal and chief sustainability officer of We Bring It On, following six years as the global sustainability director at AEG,  said, “We’re trying to help it become easier for everyone to participate instead of just the big players or a few people who are very passionate because we’re at a point where everyone wants to do something, but they can’t because there’s an access to information gap … and resources gap.”

With the disruptive forces of the pandemic, the climate crisis and a social justice uprising, it is clear the music industry — and world at large — can’t continue to do business as usual. As Regan said, “This is the moment to act. This is the moment to really come together and have a plan on how to be better, not just an inspired thought.”

She explained that her role on the organizing committee is to bring in more “sustainability gurus who are already working in music,” along with some of the great groups the members have previously teamed up with who work on sustainability and music, to develop and coordinate programming and resources.

In addition to representatives from Effect Partners, the organizing committee includes reps from AEG and the Touring Professionals Alliance. MSA has also established strategic partnerships with organizations such as Reverb/MusicClimate Revolution, LiveGreen UK, the International Association of Venue Managers, the National Independent Venue Association, and the Tour Production Group.

“Right now, we’re not even asking for money. We’re asking for contributions of intellect and time because we want to get this stuff done,” Regan said. “We’ve talked with representatives from all the major organizations. We have also gone so far as to start talking to vendors of the catering companies. We also got Rock-It Cargo and Sound Moves on the logistics side. … Global Motion is another logistics company doing some great sustainability work. … You name it, we have talked to UMG, Warner Music, we’ve talked to UTA … all the agencies, promoters.”

She added, “It’s so important for us that this is member-driven because we want it to be a place where everybody could get value out of it. And we know one of the biggest areas that people need value is in research and evaluation of sustainability solutions. It’s hard to take on the risk as an individual company of being the one to try out and develop something new, but if you can be on a working group with peers of yours from your competitors … there’s a lot less risk (and) a lot more opportunity.”

MSA is putting together a map of sustainability efforts, best practices, and resources from across the industry, currently focusing on North America.

“We don’t want to reinvent the wheel,” Regan said. “We want to give credit where credit is due. We’re doing this mapping exercise … so we can start with that map as a baseline to help identify some of the gaps. … We’ve got a lot of great resources already added, but part of our launch is to ask other people to contribute to that and we’ll have a link on our website where you can actually submit a resource to be included.”

From MSA’s initial mapping efforts, zero waste is a big topic. Regan notes, “One of the big issues in the United States is recycling is different in every city that you travel to. What can be recycled is different. So, because of that, as an infrastructure issue, that means the music industry doesn’t have standard expectations. When you go on tour, are you going to be going on a tour that recycles or not? … Right now, all festivals for the most part have recycling, but maybe they don’t. … What resources would you really need in place for everyone in the music industry to say, yes, we are going to tackle our waste issue?”

Mapping is happening concurrently with kicking off MSA’s working groups with four initial groups identified for the first six months: zero waste resources across the U.S., energy efficiency, sustainable logistics, and impact measurement and reporting. The energy working group has already started to meet with plans to put together a list of the Top 10 things you can do to power a tour efficiently.

Early on, MSA has met with other organizations focused around diversity, inclusion and social justice issues to understand what they would need or want from an organization like MSA. Regan points out that, for example, MSA talked to Roadies of Color about what it would be like to offer environmental training with Roadies of Color to try to help elevate hiring people of color within the industry.