New Bills Stadium ‘opens’ up for fan base 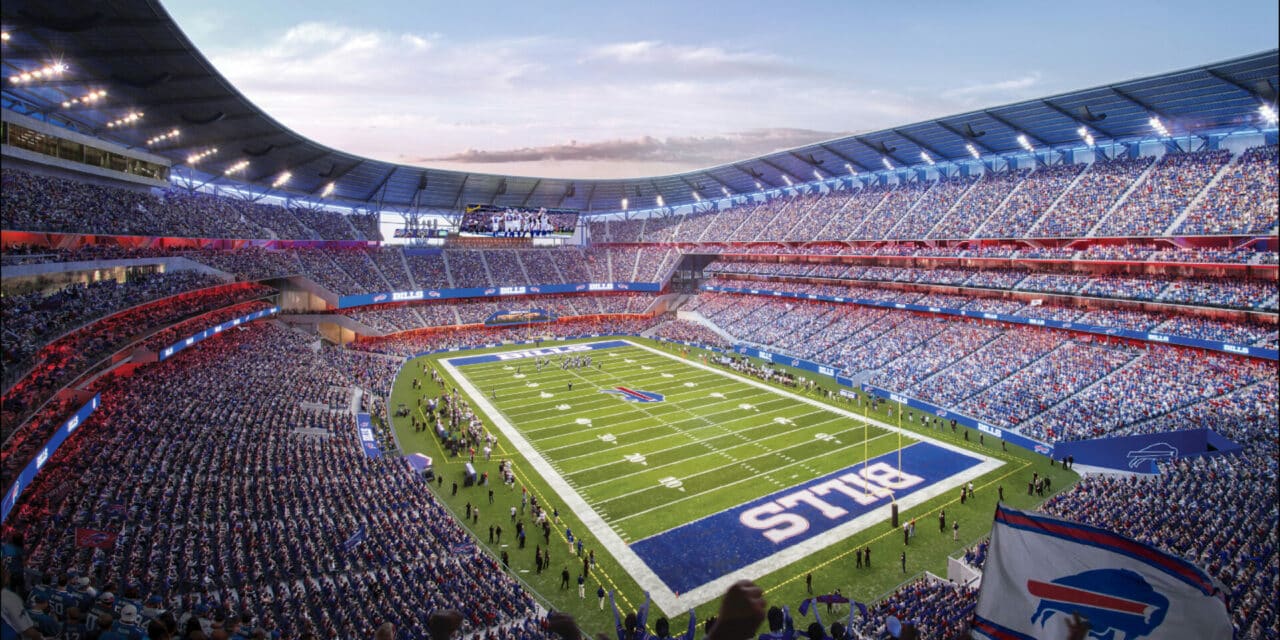 IN THEIR ELEMENT: The new NFL stadium in Buffalo, New York is designed with a roof canopy designed to shed snow while protecting fans. (Courtesy Populous)

Fans will be closest to field among all NFL venues

Early design concepts for the new Buffalo Bills stadium stand out for something missing from the building  — a complete roof enclosure to protect some of the NFL’s most fervent fans in the Snow Belt.

When the stadium opens for the 2026 football season, it will be the first new open-air NFL venue since Levi’s Stadium opened in 2014 and the sixth without a roof among the 14 NFL stadiums built since 2002.

But that’s what the Bills wanted with football taking first priority over all other events in a stadium setting. The compromise was to design partial roof cover that makes sense in a region that averages eight feet of snow annually, according to weather.com.

Populous, the architect for the $1.4 billion stadium, developed  a roof canopy with a “valley” within the depth of the structure. The design protects fans and prevents snow from sliding toward the stands and the stadium’s exterior, said Jonathan Mallie, principal-in-charge and lead designer.

“We’re creating a V (shape) with the longer elements out toward the field and shorter elements toward the exterior perimeter,” Mallie said. “It also shortens the cantilevered distance (of seating decks) from a structural point of view.”

The roof canopy is relatively lightweight, adding up to a more efficient structure.

“It’s about operational issues such as how you manage snow and melt it away and how that can be smart in terms of the overall roof height … and the overall look and appearance of the building as well,” Mallie said.

At the same time, the canopy is designed to keep crowd noise intact, providing the intimidating atmosphere the Bills want to maintain after moving from Highmark Stadium, their home since 1973.

Across sports, seating bowls keep getting tighter and more intimate. The new Bills stadium, with 60,000 capacity, will stand alone in the NFL in terms of the shortest distance fans sit from the field, Mallie said.

“We overlapped and stacked the seating tiers, creating (roof) cover for as many people as possible, while also creating that intensity around the field,” he said. “We’re not overbuilding in a football-first environment.”

Designing a tighter seating bowl also means a steeper rake, which becomes a safety issue, but the Bills’ project falls within state and local building codes tied to those geometrical restrictions, Mallie said.

The 360-degree concourses will provide views to the field as fans walk those spaces to buy concessions and use the restrooms, a departure from Highmark Stadium’s closed concourse. 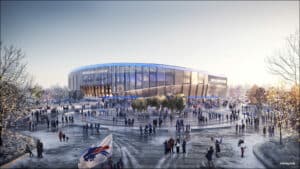 BUFFALO SOLDIER: The plaza outside the new Bills stadium will feature a buffalo sculpture as a communal spot for taking photos. (Courtesy Populous)

The exterior facade consists of iron spot brick, whose surface is speckled with dark spots created by the application of various metals, plus a perforated system of metal panels that make up a colonnade look, which gives the building its true expression from a distance, Mallie said.

“Those panels have a much lighter and fluid shape and form to them, which is a more modern look,”  he said.

Overall, the sleek exterior theme exemplifies the idea of strength and pride in the city of Buffalo which extends to the Bills. The design reflects the history of the city’s old venues such as War Memorial Stadium, known as the “Rockpile,” and Buffalo Memorial Auditorium, plus Kleinhans Music Hall, an 82-year-old venue and a National Historic Landmark.

The stadium’s north end zone features a section of 2,800 seats just 12 feet from the field, tied to a separate concourse. At first look, it’s a takeoff on the supporter sections at soccer stadiums.

The type of seating in that section has not been determined, but it falls in line with the team’s vision to develop a unique experience for all fans, whether it’s a premium space or general admission, Mallie said.

“It’s not just the product in terms of where you’re sitting and proximity to the field, but the look, feel and quality of the space that we want to make you feel at home,” Mallie said.

The downsizing trend at the highest level of sports over the past decade has caught up to the NFL, with Buffalo, Tennessee and Washington all pursuing new stadiums with 55,000 to 60,000 seats.

In Buffalo, it translates to a building with 10,000 fewer seats than Highmark Stadium.

“Generally, the trend is toward less capacity stadiums because we want them to be filled,” Mallie said. “You’re up against people having the convenience of watching the game at home. For us, it’s a mixture of having the appropriate amount of seats and creating incredible experiences that draw them to stadiums in the first place.”

Outside the new Bills stadium, is a plaza space designed with the “Family Circle.” Populous came up with the concept of a centerpiece for Instagrammable moments, similar to selfie walls in arenas.

In Buffalo, it’s going to be a buffalo sculpture, placed in a spot where most fans will approach the stadium from the northeast, Mallie said. It speaks to the tradition and history behind the Bills.

“It’s evolving, but it serves as an aspiration for what we’d like to see at the front door,” he said.