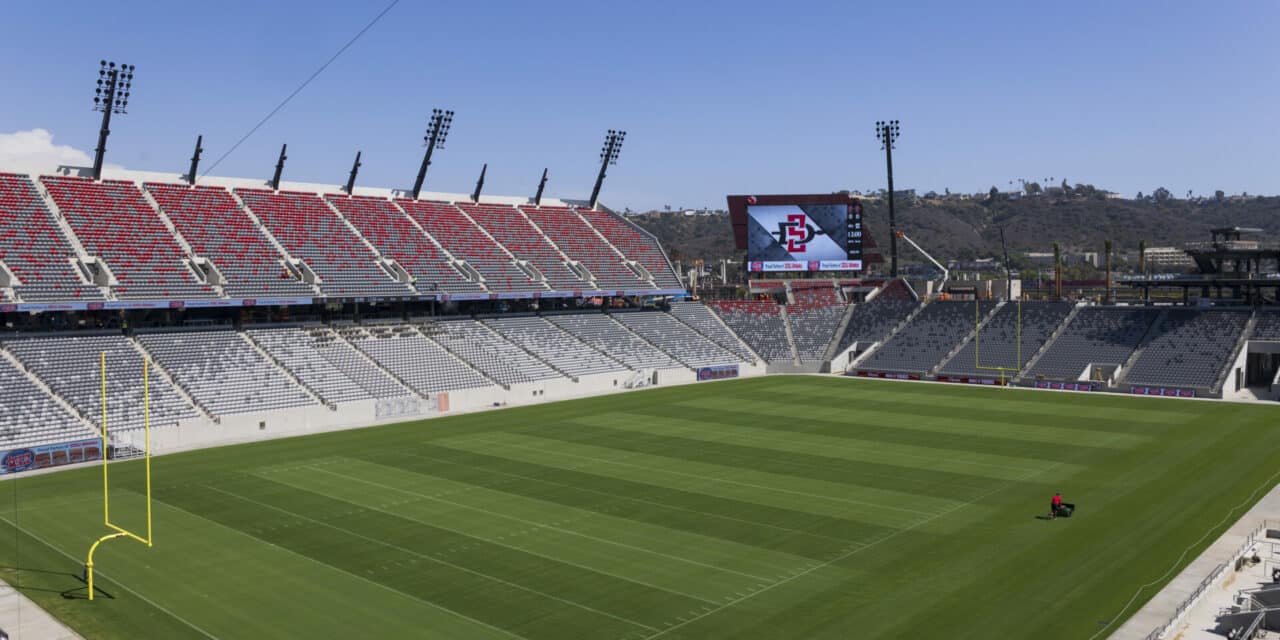 SNAP TO IT: Snapdragon Stadium is home to three sports teams with hopes of securing a men’s pro soccer club. (Katie Orchard)

Snapdragon Stadium is poised to become one of the busiest venues in college football, driven by San Diego State University’s entrepreneurial spirit for filling the new facility with multiple events across sports and entertainment.

Typically, stadiums at the Division I level are restricted to home football games, maybe college soccer and lacrosse and the occasional concert. A lot depends on school leaders’ philosophy for running college athletics venues.

That’s not the case at Snapdragon Stadium, a $310 million facility on SDSU’s Mission Valley campus. The stadium debuts Sept. 3 for the Arizona-San Diego State game and it signals the next generation of college football venues booking a multitude of events, many on the field, to maximize revenue and serve the community as a whole.

“As much as this stadium is going to be a permanent home for the Aztecs, it’s going to be so much more,” said Tom Greene, vice president of premium and ticket sales for Legends, the agency hired by SDSU to market the stadium. “It’s going to be operated more like a professional venue.”

Flexibility is the theme for a 35,000-seat stadium privately financed by the university. San Diego State Athletic Director John David Wicker said he challenged stadium architect Gensler to develop a building that could hold events 365 days a year. It helps being in sunny San Diego, where some industry observers have said for years the NFL and Major League Baseball should permanently hold their biggest events in town to capitalize on the Mediterranean climate.

As of now, there are three sports tenants with plans to add a fourth in men’s professional soccer, potentially the San Diego Loyal, a 3-year-old USL Championship club. 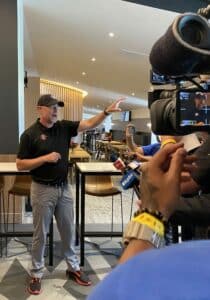 The Wave’s final two home matches of the 2022 season will be played at Snapdragon Stadium, Sept. 17 and 30. As of late August, 27,000 tickets were sold for the team’s first contest against Angel City FC.

The Legion begins play in 2023 at Snapdragon.

“We told Gensler it needs to be a stadium that’s soccer-ready and needs to work for concerts, dirt shows and smaller events,” Wicker said. “There’s four distinct zones in the corners called Garden Areas. The northeast corner is large enough to install a stage for a 1,000-person concert with food trucks.”

Snapdragon Stadium was built at the site of the old San Diego County Credit Union Stadium, their home from the time the old building opened in 1967 through the 2019 season. Many people knew it as Jack Murphy Stadium, named for a San Diego sports writer, and later Qualcomm Stadium. (Snapdragon is a Qualcomm tech brand). The old stadium was completely demolished in March 2021.

During two years of new stadium construction, San Diego State played the 2021 and 2022 seasons at Dignity Health Sports Park, a Major League Soccer stadium in Carson, California, with a capacity of 27,000.

Snapdragon Stadium’s first international booking, the 2023 World Lacrosse Games, takes place June 21 to July 1 of next year. Snapdragon plays host to the opening and closing ceremonies, the opening game, semifinals and medal games. Three fields at SDSU will be used for the event, plus the University of San Diego’s Torero Stadium.

Outside of sports, OVG360, which runs the stadium after merging with Spectra, which initially won the management contract, plans to be aggressive in booking concerts at the new kid on the block.

The first concert, Jimmy Buffett, is on the books, set for Oct. 22. Jason Mraz and Mac McAnally are supporting acts.

“It’s going to be a venue that brings a lot of different revenue streams that a college stadium doesn’t normally see,” Wicker said. “I get it, there’s different impacts, whether you’re in Tuscaloosa, Alabama, or Ames, Iowa. In San Diego, a larger community, the different social spaces we’re going to bring is the pathway people have to look at on the collegiate side to get people to come to stadiums.”

What about the NFL potentially returning to San Diego? The odds are against it after the Chargers left the city five years ago for Los Angeles and SoFi Stadium, where they’re the second tenant behind the Rams.

Never say never, if you’re drawing up the blueprints for Snapdragon Stadium. Wicker said the site is big enough and the concourses are wide enough that the building could expand to 55,000 seats to accommodate an NFL franchise.

“We’ve done our due diligence with folks around the NFL, including ownership groups,” Wicker said. “That’s probably the right size for San Diego if the NFL ever came back. If you look at the old (70,500-seat) stadium, there were a bunch of unfilled seats. That was a little bit of an issue with the Chargers.”