New Venue Takes Them to the River 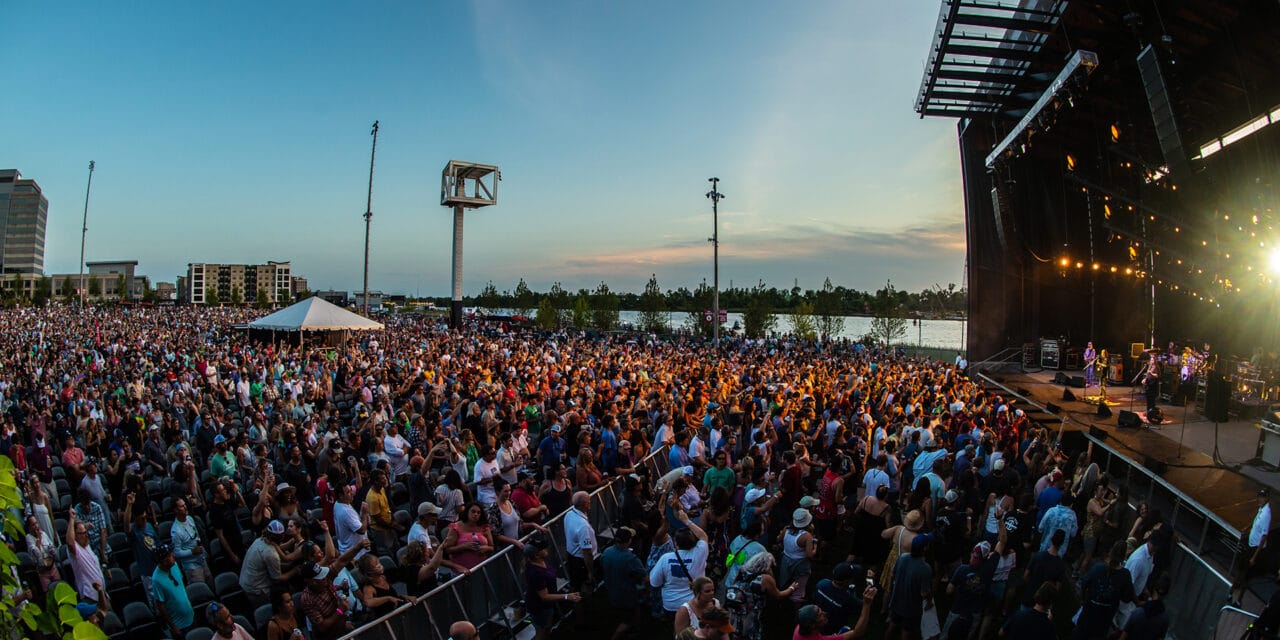 WILMINGTON, N.C. — Live Nation’s newest outdoor music venue debuted over the weekend (July 16-18) in this coastal city, riding the wave of a vacation market that relies heavily on summer tourism dollars to help fuel its economy.

The band first played Wilmington in the late 1980s at the old Mad Monk, most likely the only music club named for Rasputin. Thirty-plus years later, “Spreadheads” embraced the festive outdoor scene downtown, which is no surprise given the rock group’s fervent fan base.

They filled hundreds of hotel rooms across the city and stretched the demand for taxis and ride-hailing services to and from the venue.

The Courtyard by Marriott Wilmington/Wrightsville Beach, for example, sold 60 rooms overnight after Widespread Panic dates were announced in early May. The front desk clerk said the high volume of bookings at one time has never happened before, even during peak beach season.

The concerts attracted the likes of three female professionals from Athens, Georgia, the band’s hometown. For them, it was about a six-hour drive to Wilmington. They have all been devoted fans over the past 25 years and were set to attend all three shows.

The infusion of incremental revenue beyond the typical beach-related attractions falls in line with local leaders’ vision for the project.

The city of Wilmington owns the $35 million venue and funded the bulk of the project. Live Nation kicked in $4 million after the cost of construction materials escalated because of Hurricane Florence in 2018, which tore through the Port City, causing $33 million in damage.

The pavilion is among the final pieces of riverfront development in Wilmington.

There were two master plans for redeveloping the waterfront for future use, said Amy Beatty, Wilmington’s director of community services in charge of the project. 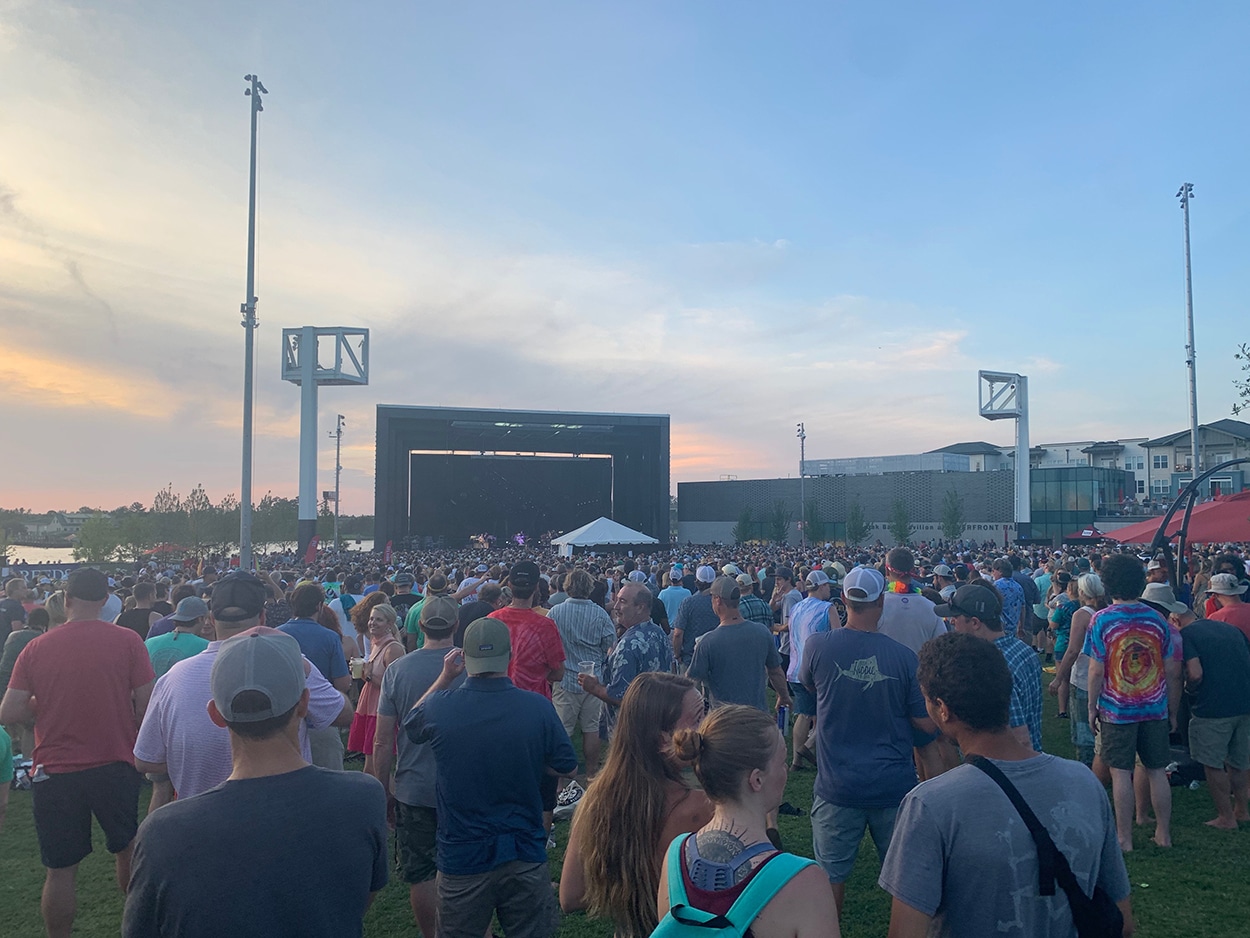 The view at Live Oak Bank Pavilion from the back of the venue. (Don Muret / Staff)

Both recommended the development of urban parks in the shadows of two bridges crossing the Cape Fear River and connecting to downtown Wilmington, Beatty said.

The riverfront project has been in the works for several years.

Initially, there was a proposal to build a minor league ballpark on the 6.6-acre site, but it was voted down by local residents in a 2012 bond referendum, according to a story in WilmingtonBiz Magazine.

One year later, the city acquired the land for $4.1 million.

“Mayor Bill Saffo and the City Council thought it was important for the last available significant piece of land on the river to be owned by the public,” Beatty said.

In 2016, in a second bond referendum, voters approved using the property to build an entertainment venue with a focus on live music in a park setting that extends to a large plaza, a kids playground and a splash pad.

The overall project balances the preservation of the community’s natural resources with the need to drive economic development, Beatty said.

As part of a public bid process, the city selected Live Nation to run the pavilion over ASM Global. Live Nation’s more favorable business model for the city was the deciding factor, Beatty said.

The city receives payments of $200,000 a year, plus $2 for every ticket sold and 50% percent of revenue from food and beverage sales for civic events, according to a copy of the management agreement obtained by VenuesNow through a Freedom of Information Act request.

In addition, the city collects 50% of the revenue from the naming rights deal Live Nation signed with Live Oak Bank, a local financial institution.

Live Nation officials have kept a close eye on the Wilmington market for years and saw the growing success of Greenfield Lake Amphitheater, said Grant Lyman, Southeast president for the company. The 1,200-capacity venue, owned by the city, sits less than 3 miles south of downtown.

“We saw bands going out of their way to add Wilmington as a stop on their tour due to the overwhelming fan demand at that venue,” Lyman said. “We got involved in booking there a few years ago and saw the demand warranted a more significant step up for artists in the market.  When the city announced they were building a large park with a concert venue, we knew we wanted to be part of it.”

Beatty said the city’s deal with Live Nation calls for 20 events annually with the potential for more bookings with written authorization from the city manager. It also provides for up to 10 civic events.

The city has the right to rent the pavilion for public and private use, she said.

The pavilion, designed in part by New York-based Sage and Coombe Architects, is not your standard amphitheater setup, considering the site and the critical need to preserve the waterfront in a hurricane zone. It’s more comparable to a festival format.

There are no fixed seats, no sloping berm and no permanent concession stands. There are 30 restroom units on the east end of the stage building, all built to code and supported by portable toilets at the back of the venue.

The 4,000-square-foot stage backs up along the riverfront, and the back-of-house structures, including Live Nation’s production offices, make up most of the infrastructure.

The site is mostly flat, and the general admission lawn is framed by a circular paved walkway. On event days, Live Nation sets up 2,400 cushioned chairs for reserved seating, produced by Spec Seats.

For Widespread Panic, there was a general admission pit closest to the stage, which fit a few hundred people.

The lawn itself, which fits about 5,000 patrons, has a slight elevation, but it’s not as pronounced as most amphitheaters. The intimacy of a smaller shed makes up for the shortage in geometry for a clear line of sight.

Sightlines from the back of the lawn were a bit obstructed by the mixing board. The tradeoff is the panoramic view of the river. At sunset, it’s an Instagrammable moment.

The acoustics were clear on Friday night, supported by Panic’s stellar light show. There were no video screens. A light breeze coming off the water provided some comfort for the crowd as nightfall approached after a 90-degree day.

For those who don’t have tickets to events, a riverwalk behind the stage provides a free listening experience. The same is true for apartment dwellers hanging out on balconies overlooking the venue from across the street.

DLS Events, a Los Angeles vendor that specializes in festival-style operations, runs the food and drink at Live Oak Pavilion. Portable carts and food trucks selling barbecue and tacos were set up along the paved walkway.

Alcohol sales are historically a key piece of business under the Live Nation revenue model for amphitheaters, and the pricing reflects it. Wilmington is no exception.

The real eye-opener was the $22 Live Nation Cocktail, which sets a new benchmark for aggressive pricing for a captive audience. The price covers a mixed drink with a double shot of premium liquor. Opening night made for a generous pour.

Concessions are all cashless. The technology appeared to work with no hiccups.

With temperatures in the low 90s over the course of the three-night run, ‘Keep Hydrated’ signs were posted. There were also signs recommending masks as COVID-19 flares up again. Nobody wore them.

The Sunday show was delayed a few hours by bad weather. The concert started at 9 p.m. with Panic playing one full set. As per city regulations, all events must stop by 11 p.m.