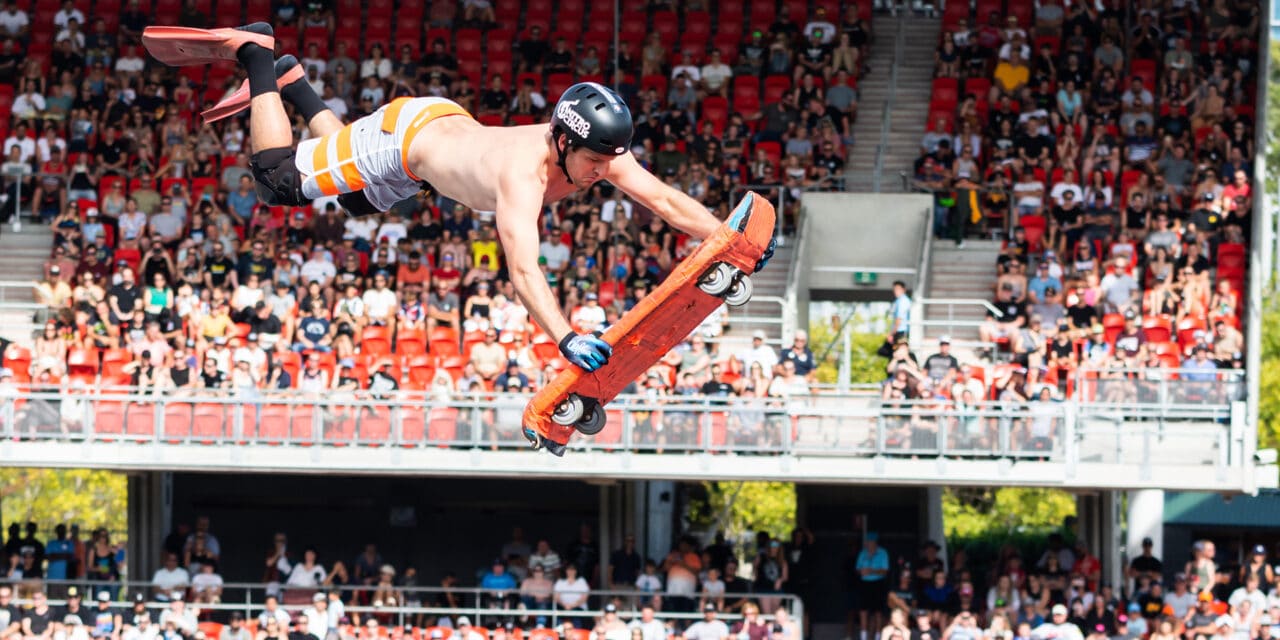 You’re never quite sure what kind of thrills are in store at a Nitro Circus performance. (Courtesy Thrill One Sports & Entertainment)

The high-flying daredevils of Nitro Circus will tour at least 27 North American outdoor sports facilities, most of them minor league ballparks, when the stunt show makes its post-pandemic return to the road this summer.

Like much of the live entertainment industry, the ballparks are looking to rebound from the economic ravages of the coronavirus shutdown.

All but a few of the shows, those that were rescheduled from 2020, are being promoted by Indigo Road Entertainment, which produces concerts at minor league parks. Indigo Road partnered with Nitro Circus parent company Thrill One Sports & Entertainment last year to bring the Travis Pastrana-founded extreme sports spectacular — which features elite athletes in freestyle motocross, BMX, skateboarding and scooters — into many of the venues where Thrill One had staged music and comedy shows.

As it stands, the “You Got This” tour gets underway Aug. 14 at Truist Field at Wake Forest University in Winston-Salem, North Carolina (a rare football stadium among the ballparks), and concludes on Nov. 13 at Banner Island Ballpark in Stockton, California. In between will be stops at ballparks in Nevada, Nebraska, Ohio, Kansas, Iowa, New York, Oklahoma, Colorado, Michigan, Florida, Arizona and Texas, plus a speedway in Washington and another football stadium in Ontario.

Presales began May 17 and the official on-sale date was May 21. Tickets range in price from $29 to $75 (for the “Mic’d Up Live” early-entry VIP experience) and have been moving briskly since most dates went on sale last week, according to Thrill One Chief Marketing Officer Steve Ziff, formerly CMO with the San Diego Chargers.

Capacities will be between 8,000 and 10,000 and possibly more if the trend toward easing or eliminating COVID-19-related restrictions continues. Some shows have “already crossed those thresholds, so we’re hoping for even bigger numbers when all is said and done,” Ziff said.

“We’re really built well for these facilities,” he said. “We’re a one-day-in-and-out show. We kind of operate like a concert. We are in and out quickly. We’re in and off the grass quickly. The idea here is to be as safe and protective of the venue and care for it like it is ours.  A lot of our tricks and performance equipment is air bag-based versus being heavy metal. A lot of venue partners and promoter partners like Indigo Road fully respect that.”

The show travels in 14 semitrailers and running time is a little over two hours with a 20- to 30-minute intermission, Ziff said.

“In some of these venues we might be the only big show they’ve been able to book,” Ziff said. “To get it on sale, to have a big crowd coming in that’s not baseball-centric … it’s exciting to them, their season ticket holders, their VIPs, their corporate partners to have big entrainment like Nitro Circus coming into that ballpark and that area of the country.”

“We had been talking to Nitro for a little while because we promote in stadiums. They came to one of my partners stadiums (in Grand Rapids, Michigan) back in 2017 and ever since then we wanted to be involved somehow, once we saw them and the energy they brought,” he said. “Once we get an idea in our heads, we try to make it happen.”

Routing the tour was a difficult proposition, kind of like trying to get a grip on a slippery fish after landing it on the boat, Glowinski said.

“The entire landscape just kind of changed from week to week, day to day, market to market,” he said, noting that restrictions varied from state to state and even within states and were changing regularly. “It was a tricky piece to this year, getting that routing set. It took a little longer than we thought. As soon as you thought you had something planned, (circumstances) changed.”

Once venue operators heard the tour was being routed, “we got a lot of people reaching out,” Glowinski said.

“They were excited about getting games back and other events and having Nitro Circus coming back through,” he said.

“Nitro Circus is one of those events we always had on our list to try and bring to Lansing,” he said. “The experience and the atmosphere of the show speaks for itself, and the places it’s been across the country and across the world, really.”

The event was originally booked to play Lansing in mid-May 2020 but will now roll in for an Oct. 1 engagement.

“I know our community is excited and we think it has a chance to be the best event we’ve ever had here at Jackson Field,” Parsons said, adding that the layout makes for good views from any of the roughly 7,500 seats in the minor league baseball team’s stadium.

As for launching the tour in August, all involved are confident that pandemic restrictions won’t interfere with the route, Glowinski said.

“We’re confident that we’ll be good to go by that August time frame. Things are looking up in pretty much every market,” he said. “We expect to announce a few more shows.”

Each market will have its own protocols, and Indigo Road and Thrill One have been in touch with state and local authorities to stay abreast of what will be required for as safe an engagement as possible, Glowinski said.

Pastrana co-founded Nitro Circus in 2003. The tour sold out about 80 percent of its dates in 2019, a company official said last year.