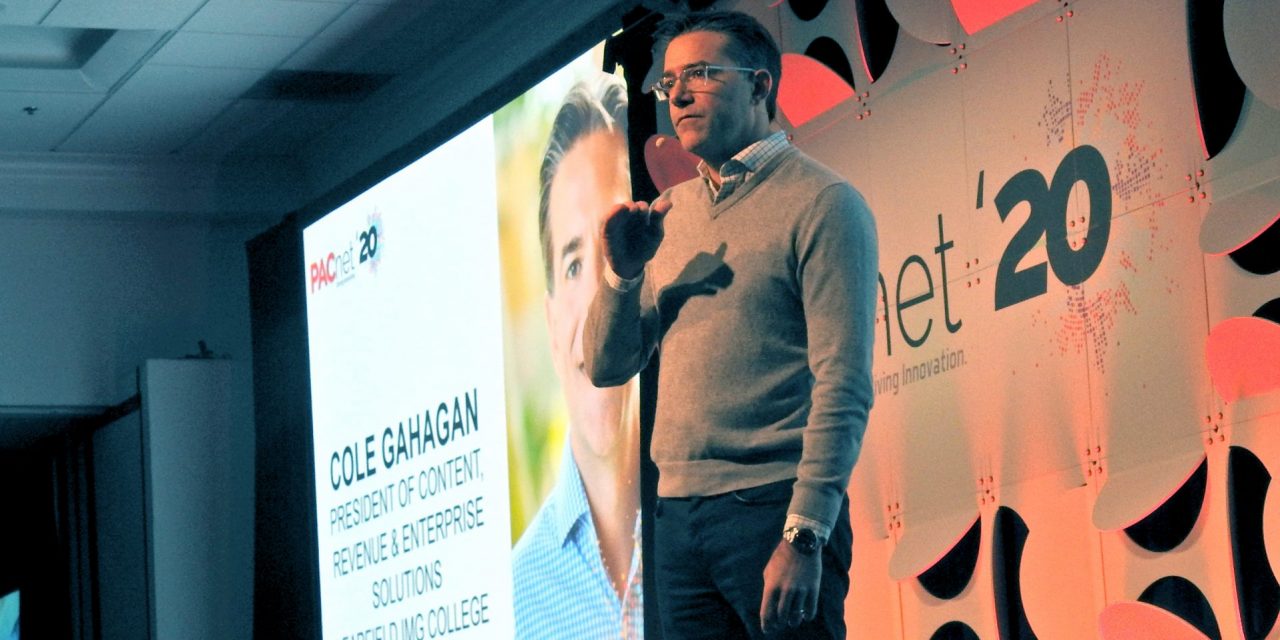 With a milestone to mark, Paciolan keeps its conference pointed toward the future of ticketing

Ticketing and marketing company Paciolan turns 40 this year, but it’s interested in more than celebrating.

Surviving four decades in the ticketing world is certainly no small feat, and for the company’s annual Pacnet conference Feb. 9-12 in Newport Beach, Calif., it did allow itself some time to mark the occasion with its clients and vendors. Eighties-themed events ruled the evening after the first full day of sessions at the Newport Beach Marriott Hotel and Spa, and the totally ’80s dance hits from cover band Knyght Ryder fueled the Pacfest Party.

But when it got down to business, the conference was about looking forward and not back, appropriate for a company that Paciolan President and CEO Kim Damron says has taken on a startup’s mentality in recent years. The conference theme of innovation showed up in panels discussing advances in Paciolan and the industry at large on fronts such as data, digital marketing, mobile ticketing and friction reduction through the entire ticket-buying process, from shopping to streamlined security and tap-and-go entry at the gate.

Among the new ideas crowding the convention facility was a new face: Cole Gahagan, who began work as president of content, multimedia sales and enterprise solutions in early January for Learfield IMG College, Paciolan’s parent company.

Gahagan used his slot in the opening keynote, alongside Damron, Paciolan Chief Technology Officer Keith White and other company execs, to talk about some things he brings to the mix from his previous stops in the sports and entertainment industry, including Tickets.com (where he met Damron), Ticketmaster and Live Nation. Most recently, he was chief commercial officer at licensed merchandise online retail specialist Fanatics. 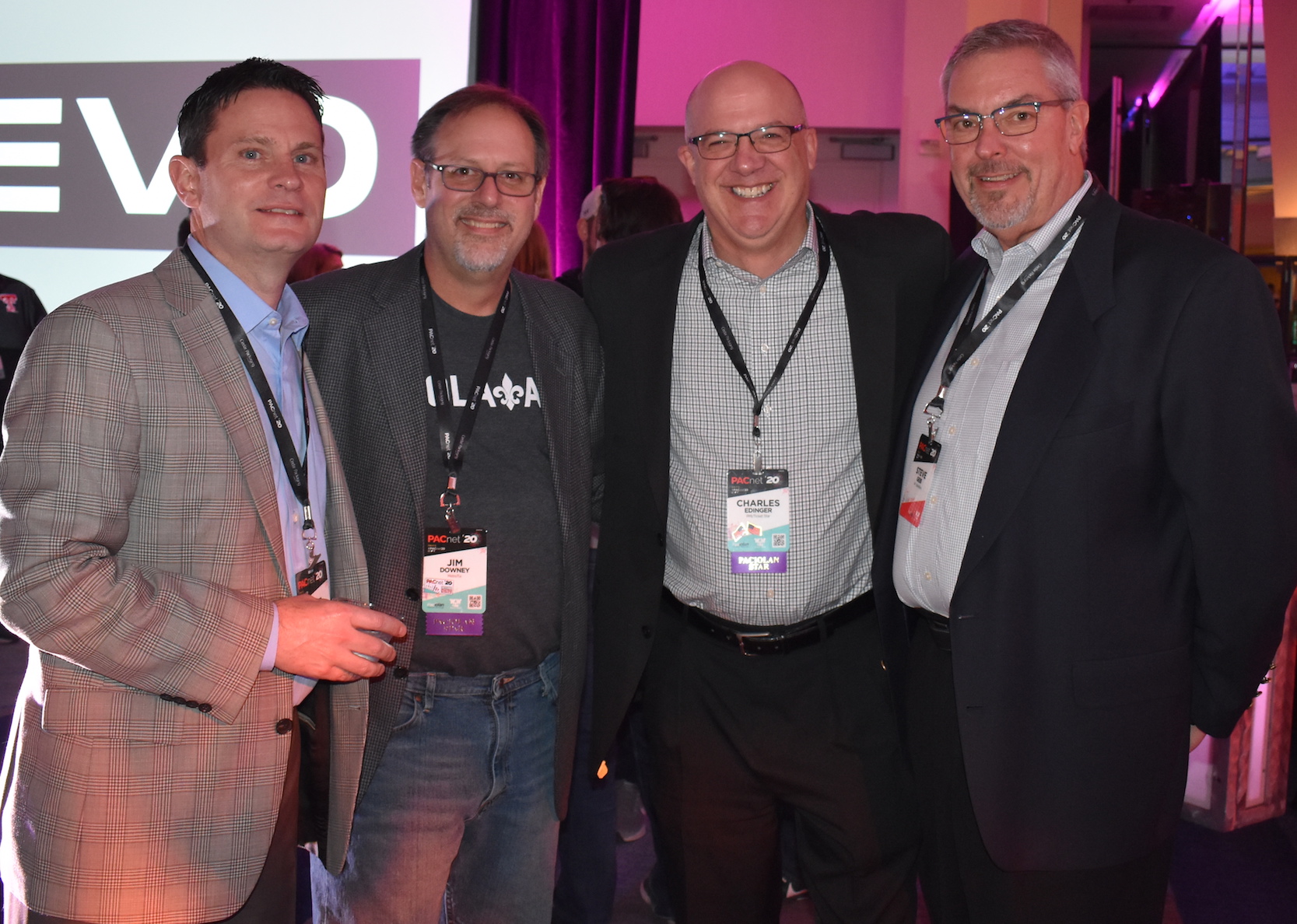 Gahagan stressed the care with which Paciolan and Learfield IMG College treat their employees and how that care colors the way that the companies deal with their customers, and he called it a hallmark of successful organizations.

“It’s no mystery that every single top B2B services company on the planet has figured out a way to do this well,” he said. “Not only well, but to do it at a level of excellence that everybody else should strive for.”

Gahagan has worked in parent-subsidiary structures and said that “sometimes if you’re in that subsidiary ecosystem … you can lose connectivity to the parent company. You can either lose or not even gain a sense of where their priorities are, what they care about, how they treat their people, where they’re investing, how they’re investing.”

In an effort to arrive at “the intersection of the things that I’ve done in my past, that I’ve had the good fortune of experiencing, with hopefully the things that resonate” with the audience of clients, he touched on some of the priorities he has picked up from working at what he called “fan-centric businesses.”

“It starts with the fan. Undoubtedly, it starts with the fan,” he said. “Something that I learned long ago, that I learned at Live Nation that has served me well over the last really 15-plus years, has been if we take the fan and keep them at the center of whatever our intention is, if we keep the keen focus on the fan as we innovate, as we make the right decisions, everything that exists beyond that, or anything that exists on the margin in terms of our business, what we’re trying to accomplish — grow as a company, partner with more folks, expand our reach — everything that is second or third to that priority of the fan is going to be served because of the fan.”

He also spoke of his experience with data analytics, helping to build “a sort of data infrastructure and data services arm which started at Live Nation and became Live Analytics, which is now Live Nation’s full-force data analytics business, and then stretched into what we built at Fanatics as well.” 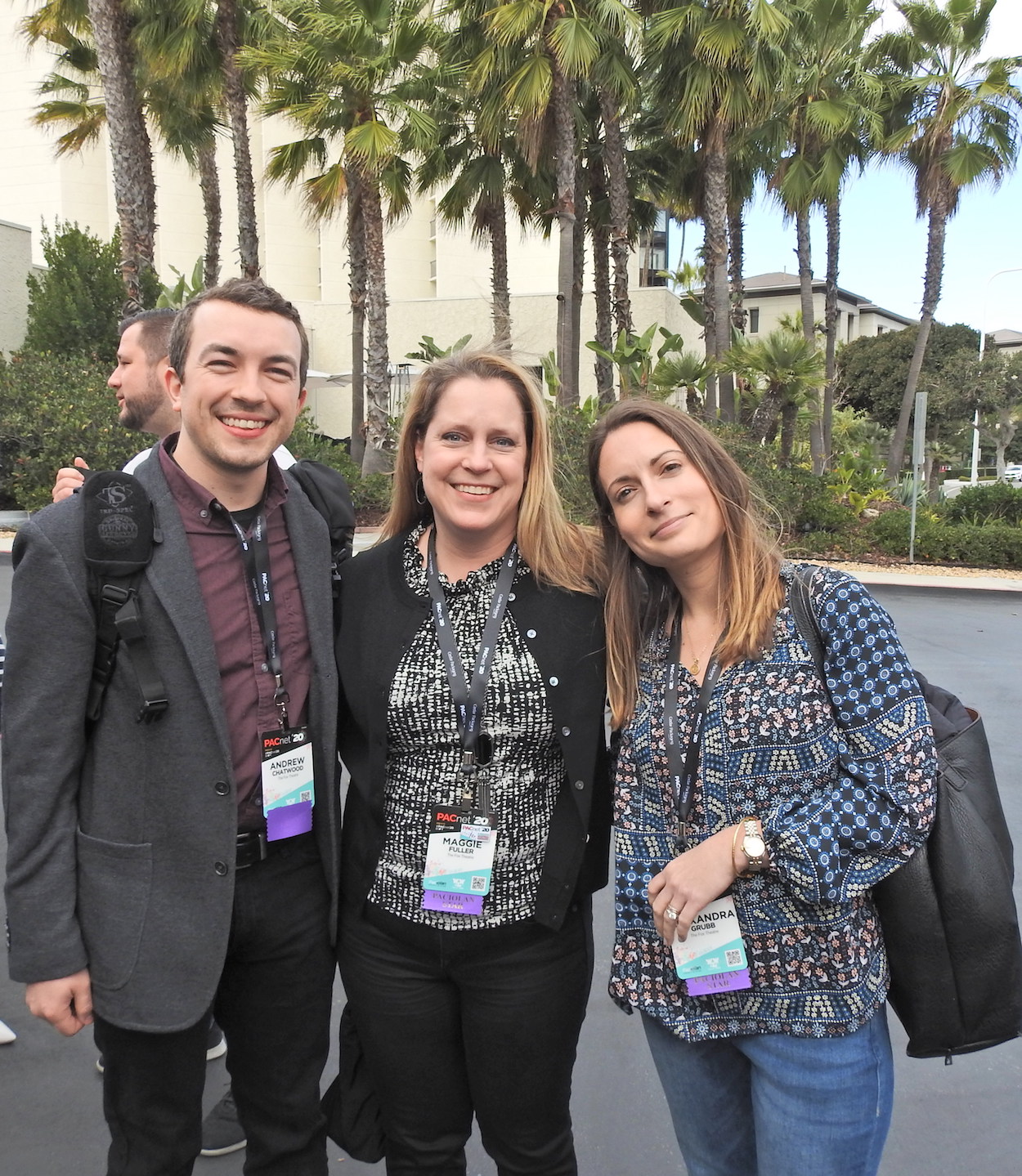 Andrew Chatwood, Maggie Fuller and Alexandra Grubb, all of the Fox Theatre in Atlanta.

Everyone talks about the importance of collecting and using data, “but it’s hard to do when you are a small organization. …  It’s a lot harder when you’re at a theater or you’re at an arena or you’re at a university. That makes Paciolan’s role in helping its customers navigate data that much more vital, he said.

He said constantly pushing forward doesn’t mean leaving behind the basics of ticketing. “I realized long ago there is a big difference between being a ‘X’ company — ticketing company or automotive company or pharmaceutical company — and being a tech company,” he said. “I promise you we will always remain focused on our priority of being a really good, sound, solid, reliable ticketing company, but we’re going to innovate as fast as a tech company.”

Gahagan joked about the difficulty of delivering a complete picture of an organization he joined so recently.

“Full disclosure: I’m on day, like, 34 that I’ve been with the company,” he said. “So you can take some of this to be the right and true direction and some of it I’m totally winging it right now.” READ ON

Esports: Game on
Data does it all
As real as it gets
Seen and heard at Pacnet ’20