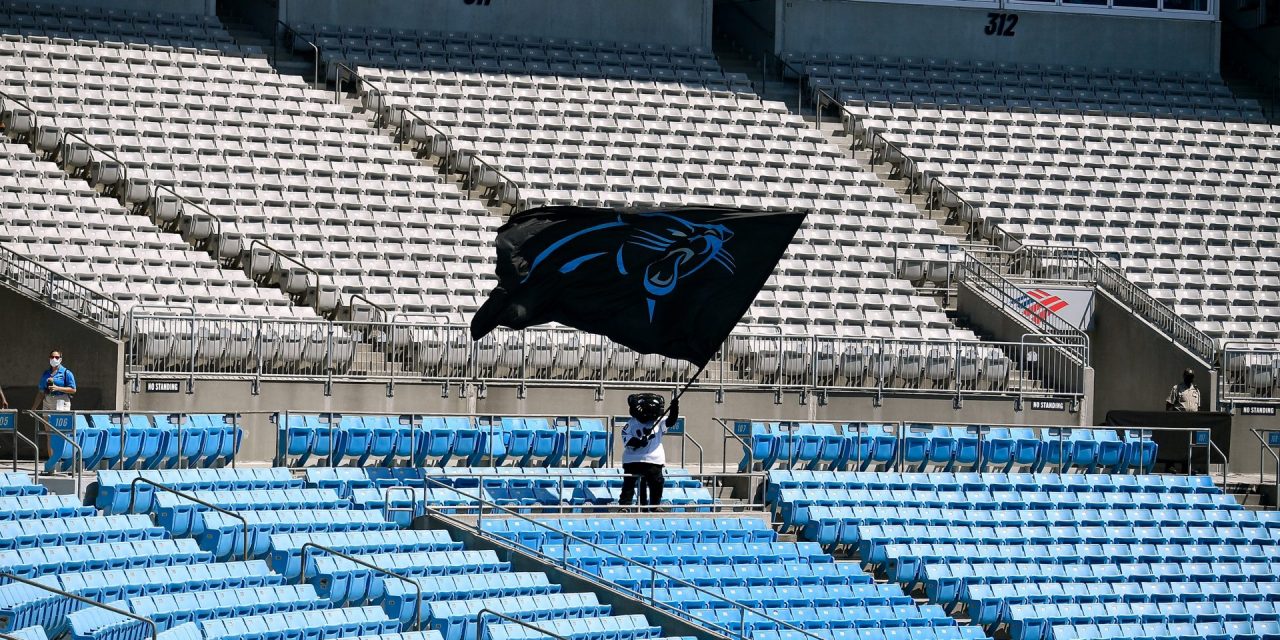 Carolina Panthers mascot Sir Purr will have some company in the stands for the team’s second home game Sunday. (Getty Images)

Bank of America Stadium to have capacity of 5,240 for Sunday’s game

The NFL’s Carolina Panthers expect a “sellout” crowd of 5,240 fans at Bank of America Stadium for Sunday’s game against Arizona with new safeguards in place to protect them during the pandemic, team President Tom Glick said.

The number derives from an easing of state of North Carolina restrictions that goes into effect Friday, allowing entertainment venues with 10,000 or more seats to open at 7% of capacity. Bank of America Stadium seats more than 75,000.

“There’s been a huge amount of preparation over the past six months,” he said. “We got a lot of help from the city, county, state, the NFL and our team internally. Fans should feel confident they will be safe.”

“Having fans in the building does make a difference,” Glick said. “There’s a connection there with the crowd.”

On Thursday, a check of Ticketmaster showed there were roughly 100 tickets remaining for sale in the lower bowl. Tickets cost $135 to $180 a person before fees. A minimum two-ticket purchase is required and seats are in groups of two to five, Glick said.

The stadium’s upper deck is closed, but the 150 suites are open with limited capacity, including The Gallery, the new bunker suites built in the west end zone. The Panthers are testing the field-level product with prospective clients.

A few months ago, PSL holders had first crack at selecting games to attend. (At the time, no single-game sales were planned). The Panthers have been reconnecting with them now that the team has a better idea of how the COVID-era season could unfold, Glick said.

“We were prepared for a number of scenarios,” he said. “It’s a great first outing for us to work through all the new protocols and new systems. If in the future, we can have more fans, we’ll be prepared.

“These things are never easy to figure out, and we’re grateful for all of the collaboration.”

All attendees and staff will be required to wear face coverings, and gates on the north and east sides of the stadium will be open with touchless temperature scanners in operation. All game tickets for the 2020 season are delivered through mobile devices.

Honeywell, which has its headquarters in Charlotte, partnered with the Panthers to upgrade the stadium’s sanitation technology, which extends to Xenex Lightstrike “germ-zapping robots” to sanitize suites, restrooms and private team spaces. It’s the same UV-ray technology used in hospitals, Glick said.

In addition, Honeywell will provide masks, hand sanitizing liquid and cleaning wipes for all patrons.

“Our plan is to get people to screen themselves before they get here,” said Eddie Levins, the Panthers’ director of security and newly installed infection control officer. “We want them to be honest with themselves. If they have symptoms, don’t come. Don’t keep spreading the virus. That’s an important message to get out there.”

Levy, the Panthers’ new concessionaire, will have its own protocols for food service with streamlined menus and all cashless concessions. Mobile ordering will be available, and there will be no hawkers in the stands.

In addition, fans can preorder concession packages through their mobile device for pickup at four designated stands on the main concourse. The cost is $15 for a “hot entree” of the game, chips, candy and a drink.

It’s a discount of about $20 over regular pricing, team officials said. The prepaid meal can be added at the time of purchase or it can be added by going to the Bank of America Stadium page on Ticketmaster.com.

The team store at street level recently reopened for business and will be open during home games. Fanatics has taken over retail operations.

The Panthers join the Cincinnati Bengals, Houston Texans and Tampa Bay Buccaneers in welcoming fans to home games for the first time in Week 4 of the season. Regulations regarding whether fans can attend vary across states and localities.

Half of the NFL’s 14 games this weekend will be played with fans, according to NBC Sports. The Tennessee Titans’ home game against the Pittsburgh Steelers would have had fans in the stands, but the game was postponed because of positive COVID-19 tests among the Titans.

Glick would not discuss finances and lost revenue that will result from a season of hosting a fraction of the team’s season-ticket base.

“Having fans in the stadium is good for our business, just getting everybody back in the routine,” he said. “We’ll work past this pandemic and have 70,000 fans back in the stadium down the road. When that is, we don’t know, but it’s really important we can begin this way on Sunday.”