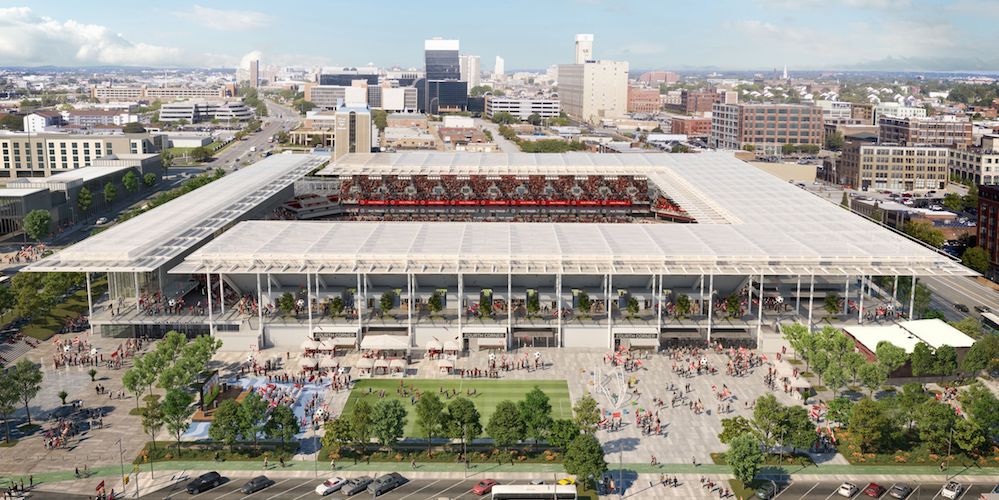 The flat roof planned for the St. Louis MLS stadium, shown in a rendering, is designed to help it fit into its neighborhood. (HOK) New MLS team looks to retrofit and new designs for inspiration The owners of the Major League Soccer expansion team in St. Louis are looking at retrofits as well as newly constructed stadiums for ideas in  developing their $250 million downtown facility. The retrofit is Providence Park, home of the Portland Timbers and the National Women’s Soccer League’s Portland Thorns FC, a 93-year-old building that was originally a minor league baseball ballpark before it was converted for soccer a decade ago. A $50 million expansion completed this year added 4,000 seats across four levels to the stadium’s east side. The St. Louis ownership group is led by Carolyn Kindle Betz, whose family owns Enterprise Rent-A-Car. It announced the stadium will be situated northwest of Union Station, […]
To access this post, you must purchase Subscribe to VenuesNow – 1 Year, Subscribe to VenuesNow – 2 Years or Subscribe to VenuesNow – 3 Years. If you are already a member of VenuesNow, please login here: log in