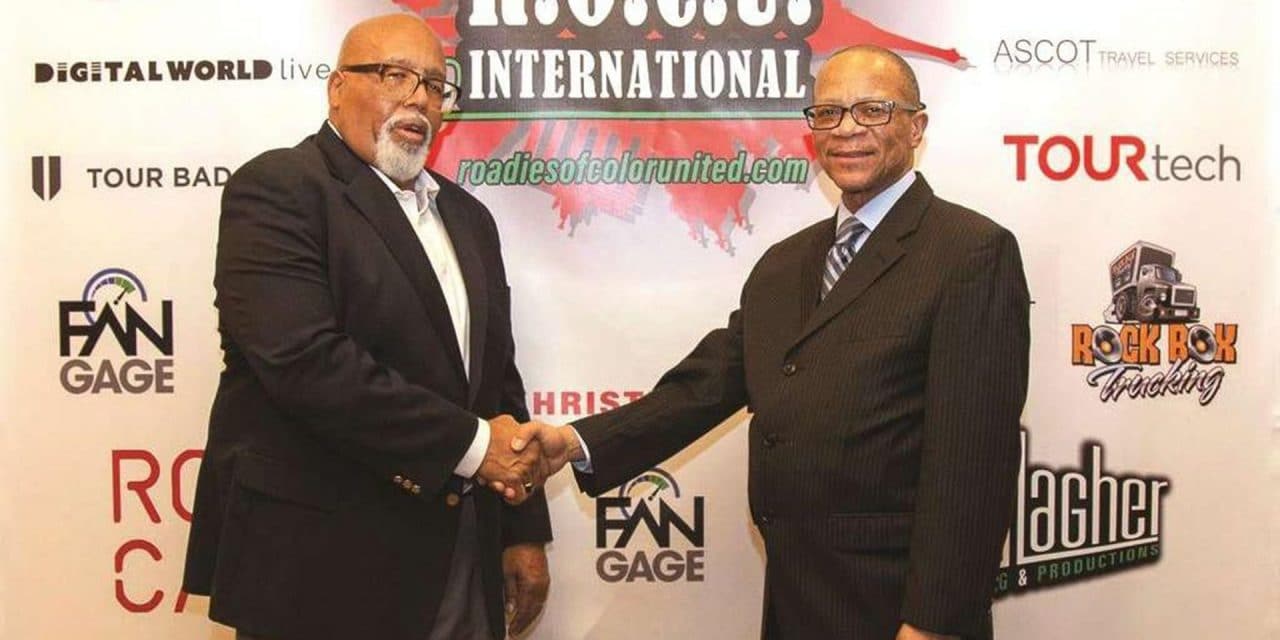 Bill Reeves and Lance “K.C.” Jackson at the first Roadies of Color United International Conference and Anniversary Celebration in February 2020 in Atlanta.

Pollstar on Thursday announced Roadies of Color United International, conceived to promote greater diversity and inclusivity in live entertainment production, will launch a day of production-centric programming for Pollstar’s Production Live! 2021, set for June 15 at the Beverly Hilton in Los Angeles.

Production Live! kicks off three days that will be the epicenter for the return of the post-pandemic live entertainment industry, including the 32nd Pollstar Live! (June 16-17) conference, The Pollstar Awards: A Celebration of Live (June 16), and a wealth of other industry-related activities, meetings and networking opportunities.

Roadies of Color United’s co-founders — production manager/tour manager Bill Reeves, production stage manager Lance “K.C.” Jackson, and Tour Forensics’ Dave “5-1” Norman — will be joined by Rebekah Foster of Ujima Sound Productions Ltd. and Tina Farris of TF Tours — all skilled veterans of the business of producing live entertainment — to explore “Roadies of Color/Inclusivity on the Road & At the Show,” a candid discussion on the critical issue of a lack of diversity in live entertainment.

“In an industry motivated to be more inclusive, Roadies of Color has become an essential platform for support, advocacy and enlightenment,” said Ray Waddell, president of OVG Media & Conferences, which oversees the events of Pollstar Live! and Production Live! 2021 and the flagship publication Pollstar behind them (VenuesNow is also part of the OVG division).“While touring grapples with myriad issues to get up and running, none loom more important than our responsibility to do the right thing and create a fair, equitable and diverse live entertainment industry.”

The Roadies of Color session will launch a day of programming specifically geared toward the challenges and opportunities facing live entertainment production professionals as the industry prepares to return for what many believe will be the busiest era in the history of touring.

Sessions include “What I Did on My Summer Vacation: How the Production Biz Stood Tall in the Pandemic,” “Day of Show: What Can We Expect?,” “Beyond Concerts: The New Production Paradigm,” and “The Next Gig: Navigating the Employment Landscape for Touring Pros,” in addition to keynotes, interactive sessions and networking opportunities. Among those already confirmed to participate are Bandit Lites Founder/industry advocate Michael Strickland, Insight Mgt./Musically Fed’s Maria Brunner, Joey Gallagher of Gallagher Staging, head of business affairs at ICM Kelly Weiss, and Production Live! gurus Stuart Ross, Charlie Hernandez and Jake Berry, who once again play an integral role in putting Production Live! together.

For more information on or to register for Production Live! 2021 and Pollstar Live! 2021 click here.