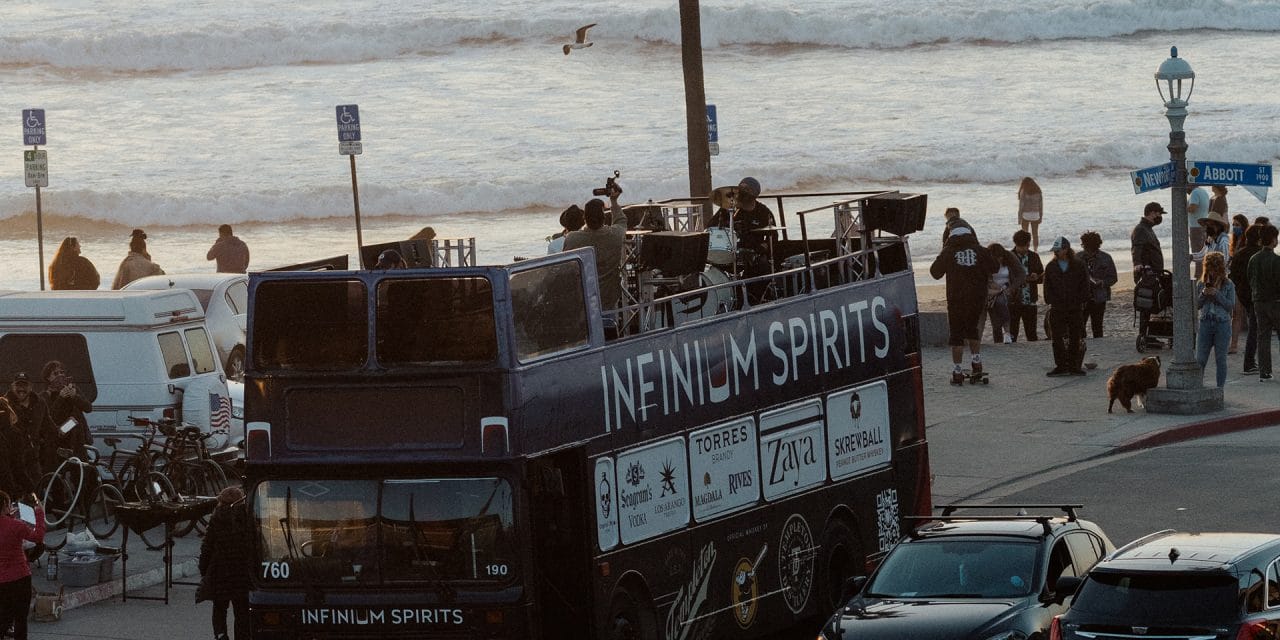 Wonderbus Entertainment takes a bus and a band to the city’s bar districts and neighborhoods. (Courtesy Dream Hahn)

Veteran Southern California arena manager Ernie Hahn jumped on the bus during the pandemic. It has paid off with Hahn bringing live music to the people of San Diego during the shutdown of traditional entertainment venues.

Wonderbus Entertainment is one piece, built around a double-decker bus equipped with a stage on top for local and regional bands to perform live while the vehicle visits the city’s bar districts and neighborhoods.

The bus and a second double-decker model coming in a few weeks can be rented for conventions, corporate outings, weddings and other special events. The starting rate is $5,000, a cost that covers the bus and a local band to roam the region for a few hours. 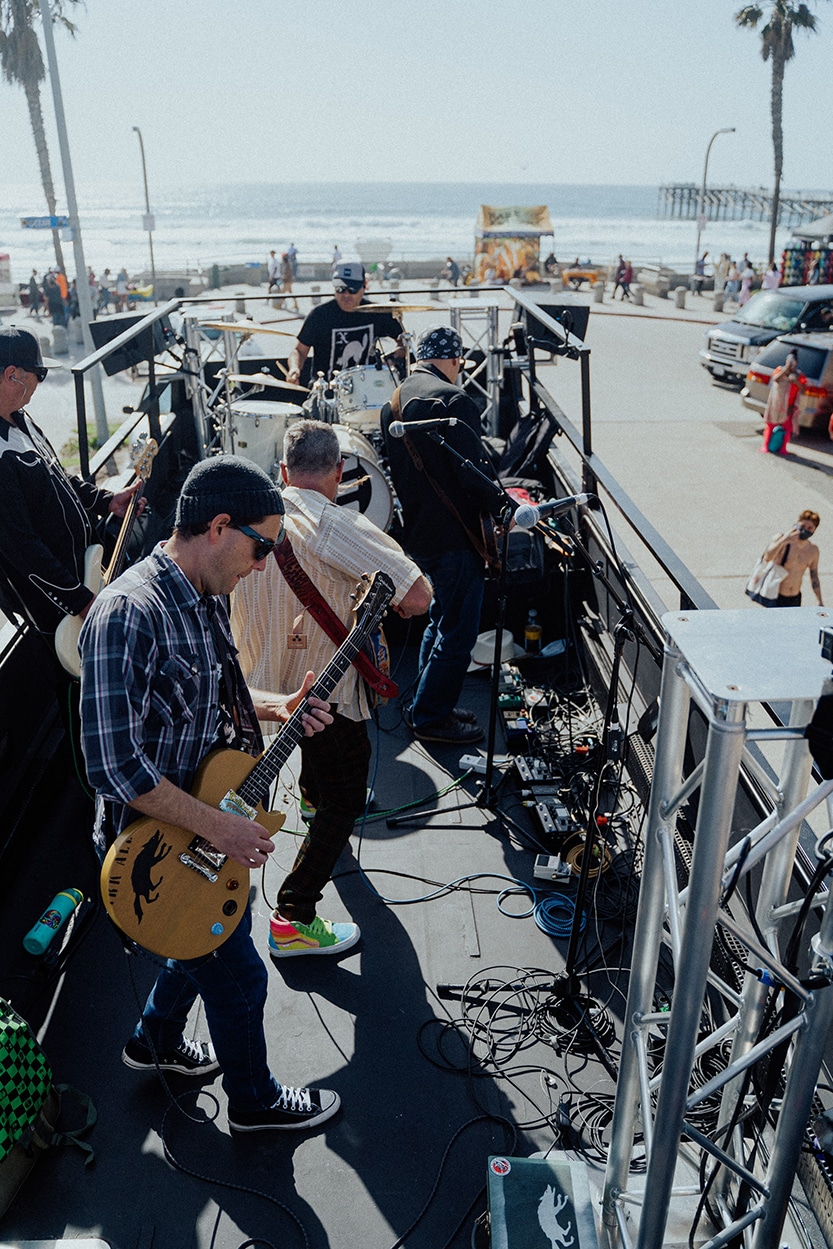 Hahn, an entrepreneur at heart, sold naming rights to the first bus to Infinium Spirits for more than $200,000, which has helped defray startup costs. To date, Dream Hahn has generated more than $1 million in revenue from a few clients, he said.

In addition to branding the vehicle officially as the Infinium Spirits Wonderbus, the one-year naming rights agreement helps the liquor distributor promote its 17 brands after relocating its headquarters to San Diego from Orange County. The move was announced in March.

Hahn’s new venture, which extends to the Wonderfront Music Festival and charitable golf tournament in town, keeps him busy while the arena he has run for the past 30 years remains closed. He’s taken advantage of deep relationships over the years to build his sideline business.

“Marketing is something I’ve always spent a lot of time on,” Hahn said. “We’ve got a 54-year-old building. You’ve got to reinvent yourself and make improvements (to match) the creature comforts of a new facility. It’s really no different now when things have slowed down. It’s a perfect time to start a new company.”

It all started with the effort to promote Infinium Spirits, as well as bring a sense of hope and some live music to San Diegans during the shutdown by putting a venue on wheels through Wonderbus Entertainment.

Dream Hahn helped flesh out the agreement by helping create the “Make It a Double” campaign. The first double hit by a Padre player at every home game triggers a promotion at Petco Park and the Gaslamp District next door in which patrons can buy a double-shot mixed drink made with Templeton Rye for the price of a single shot.

Infinium Spirits officials wanted to promote the company’s brands beyond baseball, and that’s where the bus provides additional exposure.

Chris Underwood, CEO of Young’s Holdings, parent company of Infinium Spirits, has known Hahn for a long time and that’s where the conversations started that resulted in naming rights for the bus, Walker said.

“It was all about how to use this (branded ballpark space) to engage with the community and figure out how to bring it to life, more than just something that you saw on TV a few times,” he said. “With fans in the stand this year, it’s a lot easier. Ernie and Bob know a lot of people and have some really good ideas.”

As part of the Padres’ deal, Infinium Spirits has the rights to use team marks on the bus, including the Swinging Friar logo, which sits next to logos for Screwball Peanut Butter Whiskey and Crystal Head Vodka, created by actor Dan Aykroyd, along with Templeton Rye.

“They had a sign out there at the ballpark but it wasn’t translating to people thinking about Templeton Rye,” Hahn said. “That was one of their concerns … to create experiences around it so people would know it.”

The concert-on-wheels idea had been rolling around in Hahn’s head for a few years.

During the pandemic, it made perfect sense to pursue the concept, he said.

Hahn bought a double-decker bus and converted the bottom half to a bar with lights and sound. Up top is a fully functioning stage with a platform and drum riser, and a VIP section with space for eight people.

It’s a turnkey operation where it takes about 10 minutes for bands to set up and tear down, Hahn said.

Chad Waldorf, a talent buyer for the Belly Up Tavern, a renowned San Diego music club, books bands for the bus.

The bus debuted on St. Patrick’s Day in downtown San Diego before making the rounds outside Petco Park and the Gaslamp District on opening day, April 1.

The marketing piece is heavily geared toward social media. People can register for a chance to ride on the bus through the Wonderbus Instagram account.

“It’s been amazing during the pandemic, but beyond that, there’s growth potential,” Hahn said. “People love live music and getting a chance to see it again. On several occasions, people are crying when the bus pulls up because it’s such a big part of their life. We’re bringing different styles of music to San Diego in a socially safe way while promoting the liquor brand.”

On a recent Friday night, there was a “bus takeover” featuring Common Kings, a regional rock and reggae act. They performed for two hours as the bus drove up and down the coast, followed by a caravan of fans. The band told Hahn it was the most fun gig they had ever done.

Early on, Wonderbus is concentrating on Greater San Diego, but with a second bus, the territory could expand to Orange County and Los Angeles, Hahn said.

“The bands love it,” he said. “This is a whole new resource experientially for bands to reach out to their fans, brands and partners and do something different. These are pop-up concerts that can literally roll in somewhere, play for a half-hour, and then roll somewhere else. We can activate in a unique way that most people haven’t seen.”