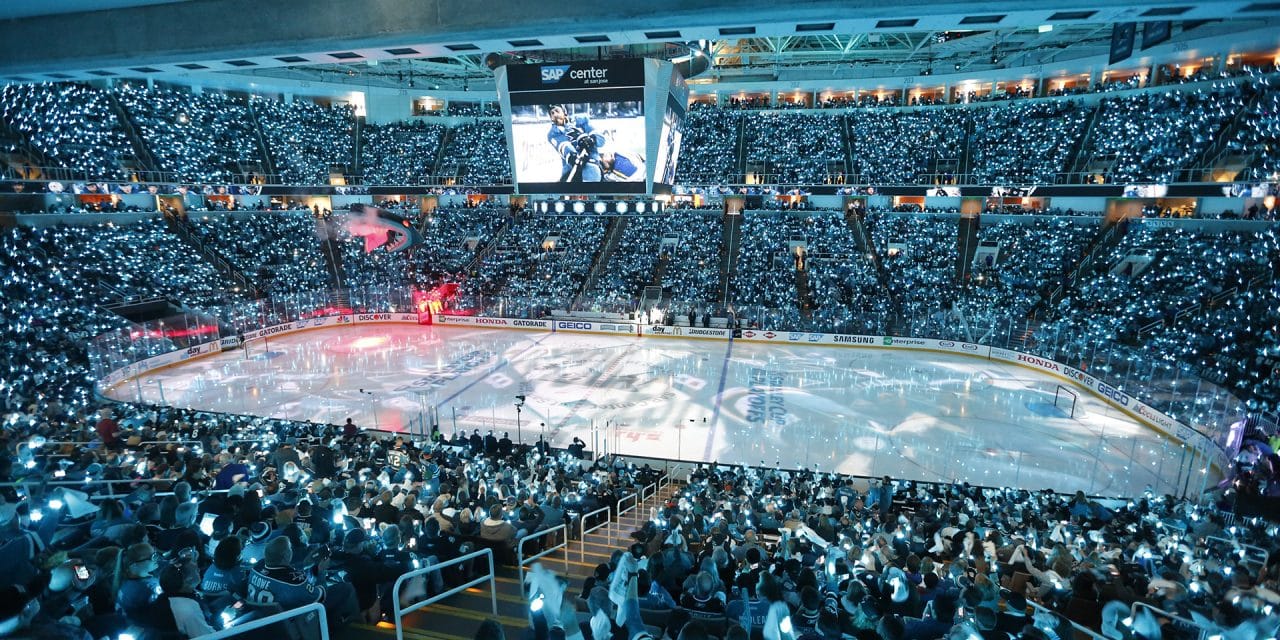 The NHL’s San Jose Sharks are scheduled to play before home fans Monday for the first time since March 2020. (Courtesy venue)

Team, venue offer 18 ways for fans to prove they have vaccine or negative test

The SAP Center is taking a gradual approach to welcoming fans back to San Jose Sharks games. The NHL team will admit fewer guests than allowed by state and county health authorities when the team plays before the home faithful on Monday for the first time since March 8, 2020.

The venue, which recently achieved Global Biorisk Advisory Council Star accreditation, is having a soft opening for Saturday evening’s game against the Minnesota Wild, with family members of players and team staff in attendance. Between 500 and 1,000 fans, in distanced pods of two to four guests, will be allowed to attend the Monday night game against the Phoenix Coyotes. First dibs go to suite and season ticket holders.

“We’re going through what I would call an incremental reopening process,” Jonathan Becher, president of Sharks Sports & Entertainment, told VenuesNow. “We can reopen probably to a couple of thousand when we open our doors on Monday. We’re intentionally not doing so to index on health first. … We haven’t had an event for 14 months and you can’t really go from zero to 100. You want to test all (the systems and protocols). As part of that process, we are choosing to go to the strictest guidelines. That is, everybody that comes to the building will have to either be tested, show proof of recent testing or proof of completed vaccination.”

The team has gone to all digital ticketing and to contactless food and beverage sales with concessionaire Aramark. The venue has also installed reverse ATM machines that exchange a Sharks-branded debit card for cash. The card can be used in the arena and anywhere else that accepts debit cards.

The team is also exploring the use of cryptocurrency, but Becher said he wasn’t quite ready to announce any details.

“If you’re showing up with a paper proof of vaccination, that requires a different process, which would be a manual step and so that will be a different line. If you want to get tested on site, in our back parking lot, because we’re not going to have full occupancy, so our parking lot won’t necessarily be entirely full, we actually have a live testing station there, which means its own entry and exit as well,” he said. “But if you use our rapid testing on site (for a $50 fee) that automatically gets digitally sent to us, so now you go back to the digital line.”

There are 18 combinations fans can choose for proving they are either vaccinated or have tested negative, an admission requirement for everyone 2 years old and up.

The team is using a company called Total Testing Solutions to administer the same-day antigen tests and the turnaround time is 10-15 minutes, Becher said.

Guests can also get a PCR test, which typically takes 12-16 hours to process, in advance of game day, with the result becoming part of the digital signature and thus allowing streamlined entry, he said.

“And finally, you bring us a third-party test, well, that’s not automated so that will be a different entry model as well because we’ll need proof of that testing,” Becher said. “But when you’re inside our digital network, so to speak, we can streamline your entry. We still want you in if you are not. It just takes an extra couple of steps.”

As for a brewing privacy controversy over requiring disclosure of what is essentially medical information, Becher said the team and venue are following requirements laid out by the state.

“This is the policy our state has adopted in order to get into public buildings and indoor arenas like ours, and so we’re following those rules,” he said. “We could, I guess, go to a different model where nobody got tested and we didn’t check for vaccination, but then you essentially couldn’t open back up in certain tiers. So, we’re following, essentially, what’s both (the federal Centers for Disease Control and Prevention) and the state’s guidance to do this.”

Becher said the team will basically store only a checkmark indicating that a guest is vaccinated or tested negative.

“It’s like storing your credit card on a website if you trust the website,” he said. “If you don’t, then to let you in, you can either show us each time, or you can choose to get tested on site. That’s why we’re trying to give people options, to (offer) whatever is most comfortable for them.”

Santa Clara County, home to SAP Center, Levi’s Stadium and a host of college venues, has been one of the more restrictive in the country in terms of allowing people to gather, and SAP was one of the first arenas in the U.S. to shut down as the pandemic struck the U.S. Becher said the county “has been clear in all our conversations and we’ve had lots of good ones.”

“Health and safety is paramount to them. Have they erred on the side of extreme caution? Yes. Has it kept caseloads here in Santa Clara County relatively low compared to other places in California, particularly compared to SoCal? Yes,” he said. “So, you could argue it both ways. What I’m pleased to tell you is that they agreed to follow the state guidance, and we’ve had lots of good conversations about that. They could have chosen, because the state gave them wide latitude, to institute stricter guidance during this reopening than the state did and they chose not to, and for that we’re quite thankful.”

There will be no in-seat food and beverage service, and eating and drinking won’t be allowed in the bowl, Becher said.

“You also cannot consume food and beverage in the suites, which is just being a little more restrictive and health and safety conscious,” he said. “We’re actually going to digital ordering for food and beverage as well, where you can order in advance (and then pick up items) to reduce contact. And we have designated areas throughout the building where you can eat that are physically distanced.”

Getting the food and beverage piece right is another reason the team is reopening incrementally.

“Since we’re only doing food and beverage in specific areas, we want to make sure that there’s not overcrowding and we have the correct number of areas,” Becher said.

“I’m not sure we can call them best practices because we’re all learning on the fly,” he said, but each venue has developed and shared good practices, he said. “That’s a process that started even before the pandemic but accelerated during that, and obviously we’d like to see it continue. There are some differences. If you are outdoor, it’s different than if you are indoor. College has different resources than pros do, but we still get together quite regularly — digitally, of course — to share what’s working and what’s less working and make sure that we have a consistent voice to our health officials both locally and the state. To the extent that we’re asking for changes to policy, we want to make sure that we’re consistent in what we’re asking for.”

Becher said that 2020 had been shaping up to be “a strong but not blockbuster year” before the contagion and that 2022 promises to be “maybe the best year on record. “

“Every artist and every promoter that we talk to is interested in getting back on the road,” he said. “We’ve booked a ton of events in January, February and March of next year. We have some this year as well. There is a general consensus that there will be more artists interested in touring than major venues that can hold them. There’s some sense that you might start to see bigger artists than you would expect at smaller venues as the mega-artists take over the bigger venues, the big artists take over the medium-sized venues, etc.”

As an example of pent-up demand for live events, the SAP Center announced two Bad Bunny shows for March 2022 and they sold out “in about two or three hours,” Becher said.

“We went back and said can we do a third show and they said we’re already booked. We have no room for a third show,” he said.