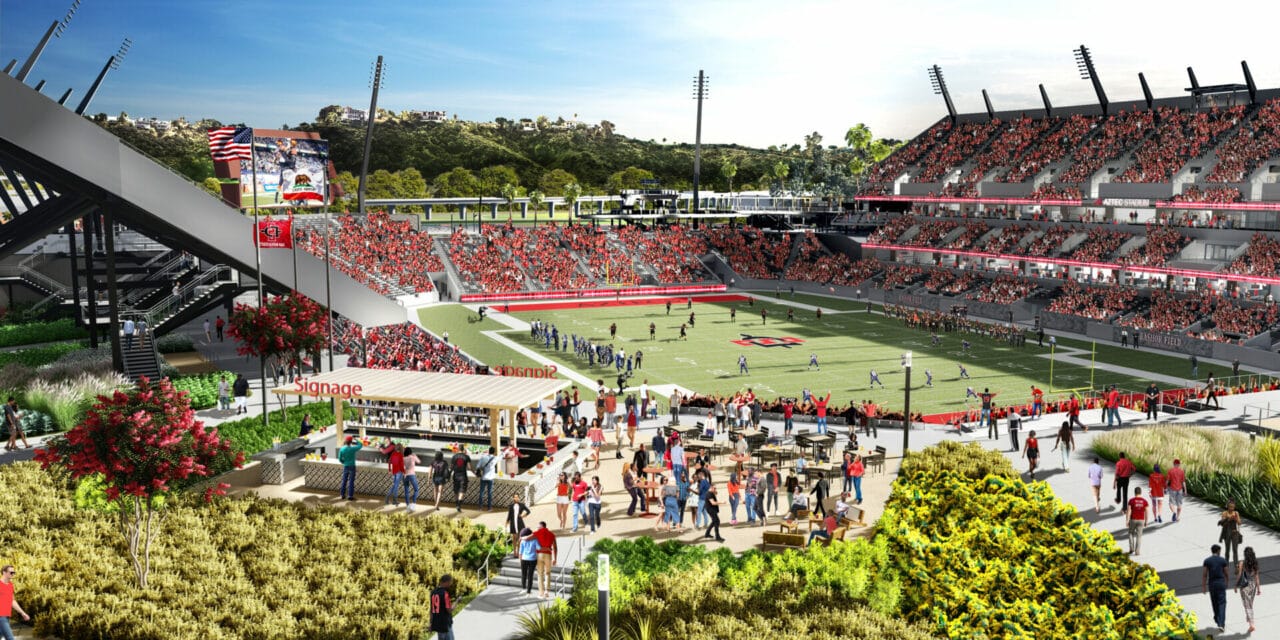 No public announcement has been made and it’s unclear whether a deal has been signed, but an image circulating locally and viewed by VenuesNow shows a rendering with Snapdragon Stadium branding on the facility’s exterior wall.

The phrase Bashor Field is underneath it. The playing surface at the new stadium is named for donor Dianne L. Bashor. In December 2019, she provided a $15 million gift to help pay for construction.

The 35,000-capacity venue is under construction and is currently called Aztec Stadium. It’s scheduled to open Sept.3, 2022 for the Arizona-San Diego State game.

Derek Grice, San Diego State’s executive associate director for the Mission Valley development, which encompasses the stadium, did not return an email for comment.

At the bottom of the Snapdragon Stadium rendering, there’s text that reads “first phase of an expanding tech, education and community focused relationship with SDSU.”

The image says it’s tied to three components: the stadium, a smart campus and an innovation district.

The phrasing refers to the Innovation District the school plans to develop over the next several years next to the stadium.

On its own, the district will include 1.6 million square feet of office, technology and research space. The project will be funded primarily through public-private partnerships, according to the SDSU website.

The stadium itself, a $310 million project, sits next to the site of old Qualcomm Stadium, where Aztecs football played home games from 1967 to 2019.

Snapdragon is a great fit as a naming rights partner for San Diego State and the school’s long-term vision for development, said experts working in the college naming-rights space.

It’s a local brand that can extract greater value from a naming rights deal over a company from outside the market in terms of employee engagement and community initiatives with San Diego State.

Considering the extent of the assets beyond the stadium, the deal could potentially command $7 million to $10 million a year, one sports marketing executive said.

Those numbers would rank among the richest naming-rights deals in college sports.

Mike Behan, Legends’ vice president of collegiate partnerships, did not return a text for comment.

Legends partnered with JMI Sports to market the new stadium’s naming rights and sell premium seats, and it also fills the role of owner’s representative.

Earlier this year, San Diego State was in talks with San Diego County Credit Union for stadium naming rights, multiple sources said, but those discussions apparently fell through over the past six months.

The credit union held naming rights for the old stadium from 2017 to 2020.

In what turned out to be a quirk of fate, Snapdragon held naming rights for a short period of time in 2011 when the old building was called Qualcomm Stadium.

Over a 10-day stretch in late December of that year, Qualcomm temporarily changed the name to Snapdragon Stadium for two college bowl games and a San Diego Chargers Sunday night football game.

At the time, Qualcomm was trying to build name recognition around what was then the new Snapdragon brand, local media outlets reported.

Moving ahead, Snapdragon’s brand recognition should multiply exponentially for both the new stadium, which will also book soccer and concerts, and the surrounding development.

San Diego State is also in the process of signing founding partners for the stadium.

One week ago, school officials announced Sycuan Band of the Kumeyaay Nation and Sycuan Casino Resort as the stadium’s first founding partner.

The Indian tribal community will sponsor two premium spaces: The Piers, a three-level space tied to 22 loge boxes, three bars and a concession stand; and the Founders Club, connected to four suites and about 50 club seats.