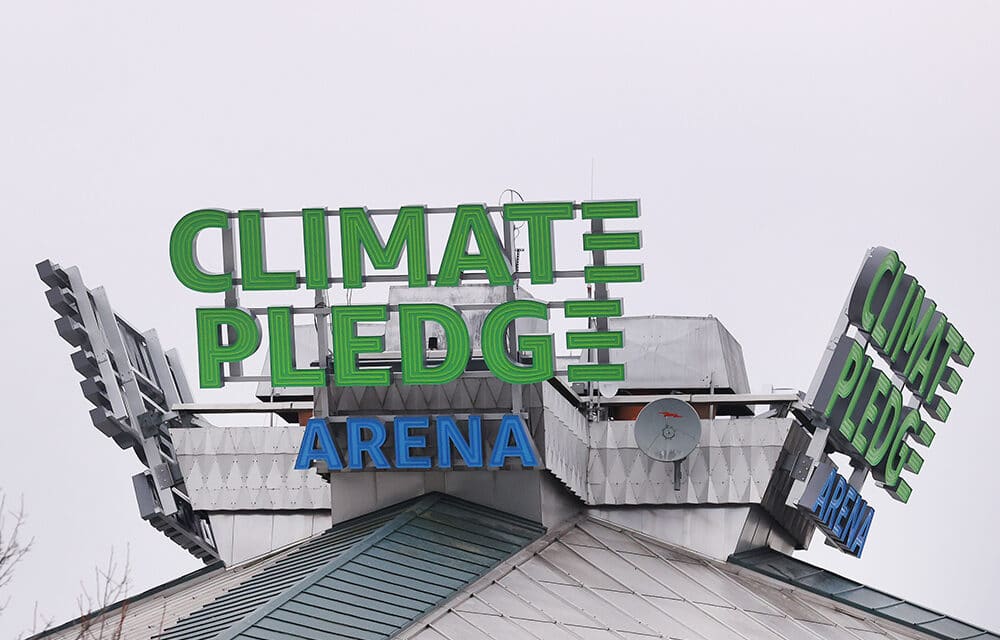 Two of the biggest sponsors tied to the Seattle Kraken will not have their company’s name attached to the assets they bought, an anomaly in the world of sports marketing.

Amazon, which holds naming rights for Climate Pledge Arena, and Starbucks, sponsor of the NHL expansion team’s practice facility, weren’t concerned about executing a brand play for those two venues.

It was more about cause marketing regarding Amazon’s focus on sustainability and Starbucks’ interest to revitalize Seattle’s Northgate neighborhood, home to the Kraken Community Iceplex.

“It is unusual for sure,” said Dan Griffis, president of OVG Global Partnerships, the marketing agency for Climate Pledge Arena. “How many other naming rights of the two major assets that sports teams have did not have their brand on either one? It’s the first time I’ve seen it.”

Both Seattle-based companies passed multiple times on the opportunity to become sponsors, according to Griffis.

“That’s another part of this story,” he said. “There were a few partners along the way that took some time … but over time, they saw the momentum building and the story to be told. They got to know the team, (Kraken CEO) Tod Leiweke and everybody who works there. Their comfortability on pulling the trigger was enhanced over two years and they came aboard.”

On its own, Starbucks said no to OVG on three occasions. It wasn’t until the practice facility was presented to the coffee retail giant and the whole community service aspect caught their attention, Griffis said.

As part of the agreement, a percentage of store profits from a Starbucks location at Kraken Community Iceplex supports the team’s One Roof Foundation and other local nonprofits.

Amazon also turned down OVG’s overtures until the agency switched to more of a philanthropic initiative.

As it turned out, the Amazon agreement approaches $400 million over a 20-year term if certain benchmarks are met connected to the arena’s goal of becoming the first certified carbon-neutral sports facility, sources said.

One note: The Amazon brand is attached to the arena’s recording studio, reserved for artists that play the venue.

“It took a lot of persistence, but on the flip side, we were patient and knew over time, we weren’t going to do bad deals,” Griffis said. “We had to protect the integrity of all the deals we were doing with these other brands and the levels of deals we were doing it with; we couldn’t undercut what we were trying to accomplish.”

“How many other naming rights of the two major assets that sports teams have did not have their brand on either one? It’s the first time I’ve seen it.”

It wasn’t just about the new hockey team, Brach said.

The pitch extended to the diversity of events, from concerts to family shows to the WNBA Storm and NCAA events; the Kraken’s close bond with the NHL; the iceplex, where a million families in the region can learn how to skate and play hockey; and the Seattle Center campus, where the arena is situated.

“It’s the totality of it that nothing else in the market could compare to,” he said.

The business plan covers a core of 25 primary sponsors making up 90% of sponsorship revenue for the team and the arena. By comparison, most big league arenas have between 80 and 130 partners, he said.

It’s the same “less is more” strategy that Oak View Group co-founder and CEO Tim Leiweke successfully applied at AEG, the company he ran for 17 years.

“We set the new rate card in the city, for sure,” Griffis said. “There were brands like (retirement planner) Symetra that had never done anything in Seattle. They’ve had the opportunity with other teams but they chose the Kraken. There’s something to be said for patience.”

OVG’s marketing campaign started in earnest one full year before the pandemic hit in March 2020.

Conversations with Symetra and other founding partners Alaska Airlines, Virginia Mason Franciscan Health and WaFd Bank were done face to face, and most of those deals were signed before COVID-19 shut down live sports and entertainment in March 2020, Griffis said.

OVG officials would not speak to the dollar value for those deals, but founding partnerships typically run in the low to seven figures annually, sports marketers say.

“COVID made us work harder and be smarter and make sure we’re thinking through every aspect from a partnership perspective to make sure they feel effective as a member of the Kraken family,” Brach said.

NORTH TO ALASKA: Founding partner Alaska Airlines has a replica airplane hanging inside the arena as part of its activation. (Chris mast)

NORTH TO ALASKA: Founding partner Alaska Airlines has a replica airplane hanging inside the arena as part of its activation. (Chris Mast)