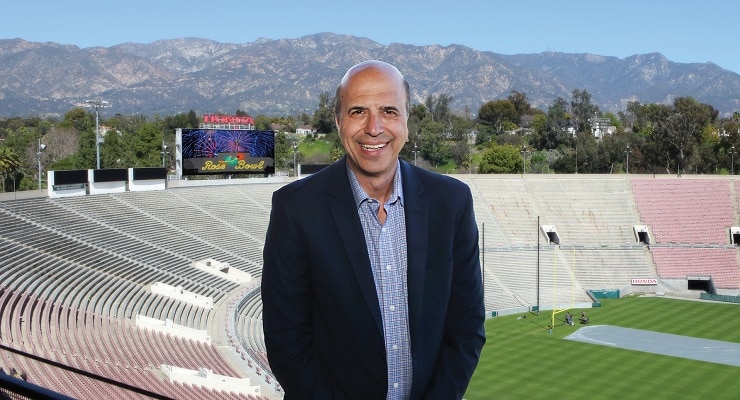 Darryl Dunn isn’t ready to ride off into the sunset, although it sounds enticing considering the stunning backdrop at historic Rose Bowl Stadium, which he’s been a part of for the past 27 years.

Earlier this month, Dunn, 60, announced his retirement as general manager and CEO of the Rose Bowl Operating Co., the entity in charge of running the stadium in Pasadena, California.

Dunn has held that position since 1999 after he spent four years selling premium seats at the stadium before serving as assistant general manager.

His final day on the job is June 30. At this point, retirement is a bit of a misnomer, according to Dunn. He plans to remain in the venue business.

“I don’t know what the next chapter is,” Dunn said. “I’m searching and trying to figure it out. But without a doubt, Act 2 is coming. I love this industry and love what I do. I just may do it in a little bit different way.”

In addition, Dunn oversaw a $200 million stadium renovation, the centerpiece of which is the Terry Donahue Pavilion. The press box and premium seat tower encompasses 54 suites, 48 loge boxes and 1,200 club seats.

The multiyear project was completed in 2016, bringing the building up to par with premium amenities at other college football facilities.

As part of the improvements, Rose Bowl Operating Co. signed long-term extensions with anchor tenants UCLA football and the Tournament of Roses through 2044 and 2048, respectively.

For live music, the group recently signed a five-year extension with Goldenvoice, a division of AEG Presents, to book more festivals. This year, eight to 10 festivals will take place on the stadium grounds, Dunn said.

Food consultant Mike Plutino characterized Dunn as a thoughtful leader throughout the process for upgrading the stadium.

Plutino’s firm, Food Service Matters, has done work at Rose Bowl Stadium since 2013, when the pavilion opened. The company later expanded its role to cover Brookside Golf Course, part of the overall campus.

Dunn’s ability to listen to and understand all points of view stands out as Plutino looks back at the stadium modernization.

“I’ve been fortunate to have a front row seat watching the Rose Bowl evolve and adapt to the changing needs of today’s fans … with Darryl behind the scenes letting his team shine, which in my view is the epitome of a great leader,” Plutino said. “He’s leaving the Rose Bowl in a great place for the next 100 years.”

As he winds down his tenure in Pasadena, Dunn spoke to the future of the facility that opened on Oct. 8, 1922. The opening of SoFi Stadium in Inglewood, California last year presents stiff competition for stadium tours. In 2022 alone, SoFi has at least 10 concerts on the books.

“We’ve been preparing for (a new NFL stadium) since 1999,” he said. “We did a market analysis and it’s been one of the biggest threats to our business. We know if one ever got built, other stadiums would get hurt.”

Dunn mentioned the Los Angeles Memorial Coliseum as another building affected by SoFi Stadium, a $5-plus billion facility featuring cutting-edge technology and a myriad of seating options on an expansive property.

“LA is the most competitive stadium market in the country,” Dunn said. “One of the keys with any older stadium is to keep investing in it. The Rose Bowl is set up for long-term success but there’s more work to do.”

As the caretaker of a vintage venue, Dunn developed expertise in updating a stadium without stripping away its heritage. In that respect, he feels there could be an opportunity elsewhere to run an older building with loving care or serve as a consultant on a restoration project.

“My goal for the Rose Bowl all along was to be the modern elder of stadiums,” he said. “As you get older, how do you stay younger? I want to do similar things and take it on the road a little bit.”

“The good news is it’s a very strong market and an aggressive market,” Dunn said. “People are trying to invest and get better. I know I can still help people. I’d prefer to stay on the West Coast but it’s not an absolute. My kids are out of college. There’s some flexibility there.”