The Stage Is Set (But the Seats Won’t Be Full) 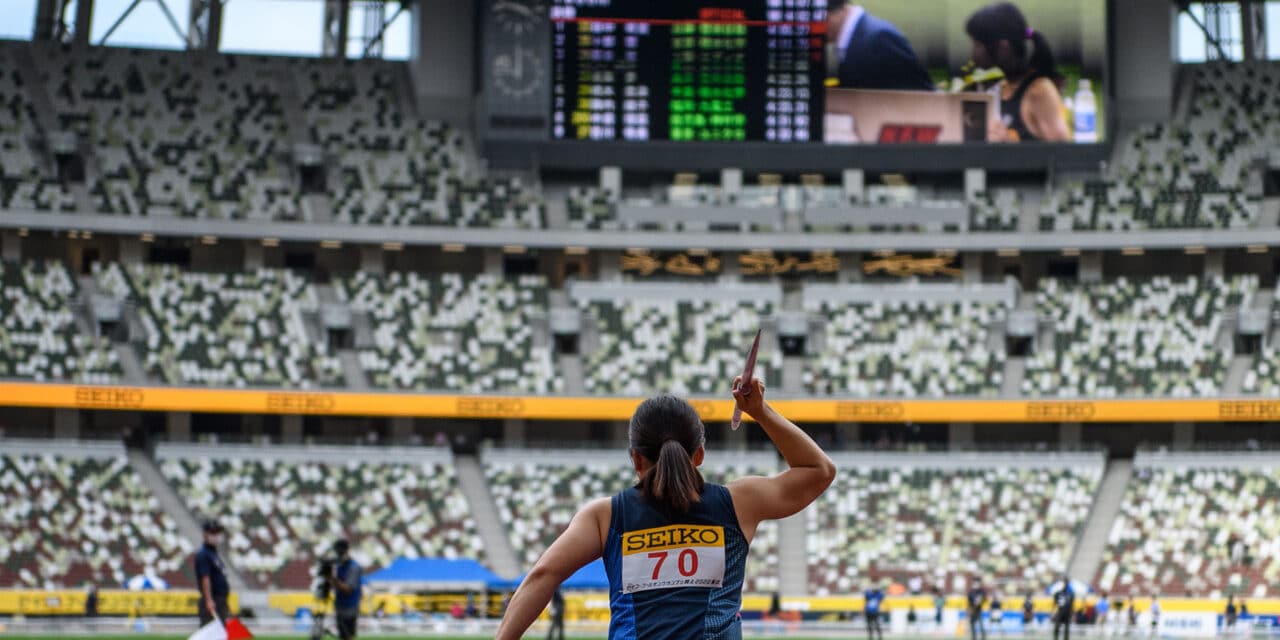 A QUIET PLACE:  A javelin thrower begins her run at the Golden Grand Prix 2020, a test event for the Japan National Stadium in Tokyo in August 2020 that was held without fans. (Getty Images)

How Tokyo’s Olympic Stadium went from spectacular to straightforward

Dave Parker is a journalist and trained civil engineer, who has developed a reputation for helping eminent architects and engineers write books. He co-wrote “Olympic Stadia: Theatres of Dreams” alongside Geraint John, an architect, professor and senior adviser to global design firm Populous. VenuesNow spoke to Parker about the Olympic Stadium in Tokyo, completed in 2019, where the Summer Olympic Games are scheduled to open July 23 and will be followed by the Paralympic Games.

What makes the new Tokyo stadium stand out among other Olympic stadiums? 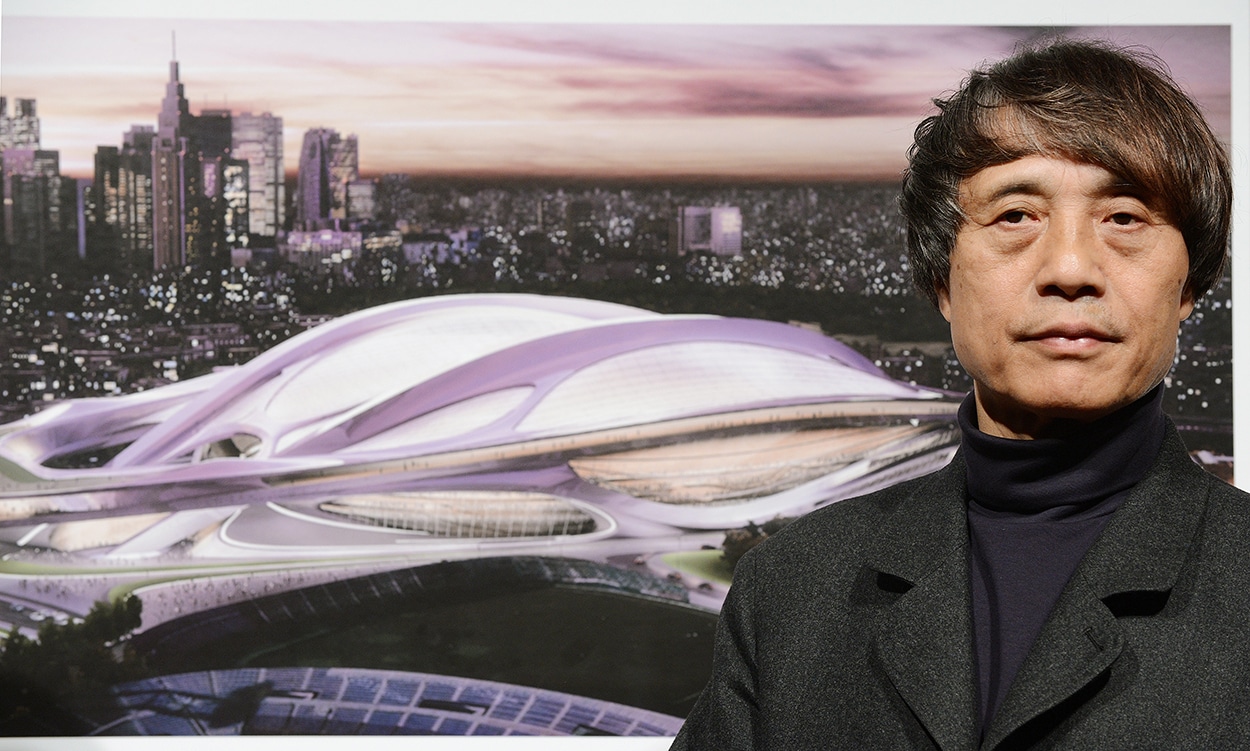 Apart from the fact that the Olympics will go ahead without any spectators (pending a reported late request from the International Olympic Committee to allow fans), the story of the Tokyo stadium, of course, (revolves around) the original Zaha Hadid design, which was really spectacular and a tribute to her genius, if you like. (Hadid died in 2016.) But looking at it from the somewhat cynical viewpoint of a civil engineer, all I could see was cut costs and time overrun. It’s a very complex structure they were trying to build, and it would have been a bit like Montreal, way back (in 1976), when they didn’t finish the stadium in time because it was too ambitious. Also, there was a strong feeling that it should have been designed by a Japanese architect, as well.

One thing that’s special is that it contains a lot of wood, a lot of structural timber in the roof structure. And that’s sort of a Japanese idea. Tokyo was originally a timber city. All the houses were wood. That’s why it suffered so much damage from firestorms in World War II. It reflects that. Otherwise, it’s a fairly conventional stadium, which was fairly straightforward to build on time and within budget, which is quite an achievement for Olympic stadiums.

Seeing the original design, and what it actually ended up being, was a slight disappointment, I have to admit.
The timescale was tight after the cancellation of the Zaha Hadid design, so they couldn’t really go in for anything too dramatic. But as you say, apart from the timber roof, it’s a very standard stadium, really.

It’s still a huge step forward from the stadium that was used in the 1964 Summer Games in Tokyo, I guess.
That site has had a stadium for many, many years, even before the Olympics. It goes way back to the 1930s. In 1956, there was a new one built on the site of the old one, which was such a good stadium that they decided to extend it into the Olympic stadium. It came with quite a bit of innovation back then. They were the first ones to actually do color TV, the first ones to transmit via satellite to the United States. And it was the very last time an Olympic stadium used a cinder running track.

The difference between (the one that opened in 1958 and the one that opened in 2019) is that the first one (was part of) the authorities’ major urban regeneration project around the Olympics. That’s what happened before in several places — Barcelona (in 1992) is another good example. They put in new subway systems, new sewage systems, and all sorts of things that were all part of this whole big package. They could afford it at the time — they were going through an economic boom — and were recovering from the damage from World War II. This was a perfect excuse to show the world that they were back in business.

One last question about the Zaha Hadid design: I also read it was too extravagant for some of the more conservatively minded architects and politicians. Was that a fact?
I think it was. Put it this way: If it had been built, it would have been by far the most spectacular Olympic stadium ever. It would have been very expensive. I don’t think there were any attempts, or any clear attempts, to pay homage to Japanese traditions. It was a design of a stadium you could have plunked down in any city. That was the main thing — it wasn’t Japanese enough.

What have been some of the most significant changes made in terms of stadium design and the technology since you first began writing about stadia? 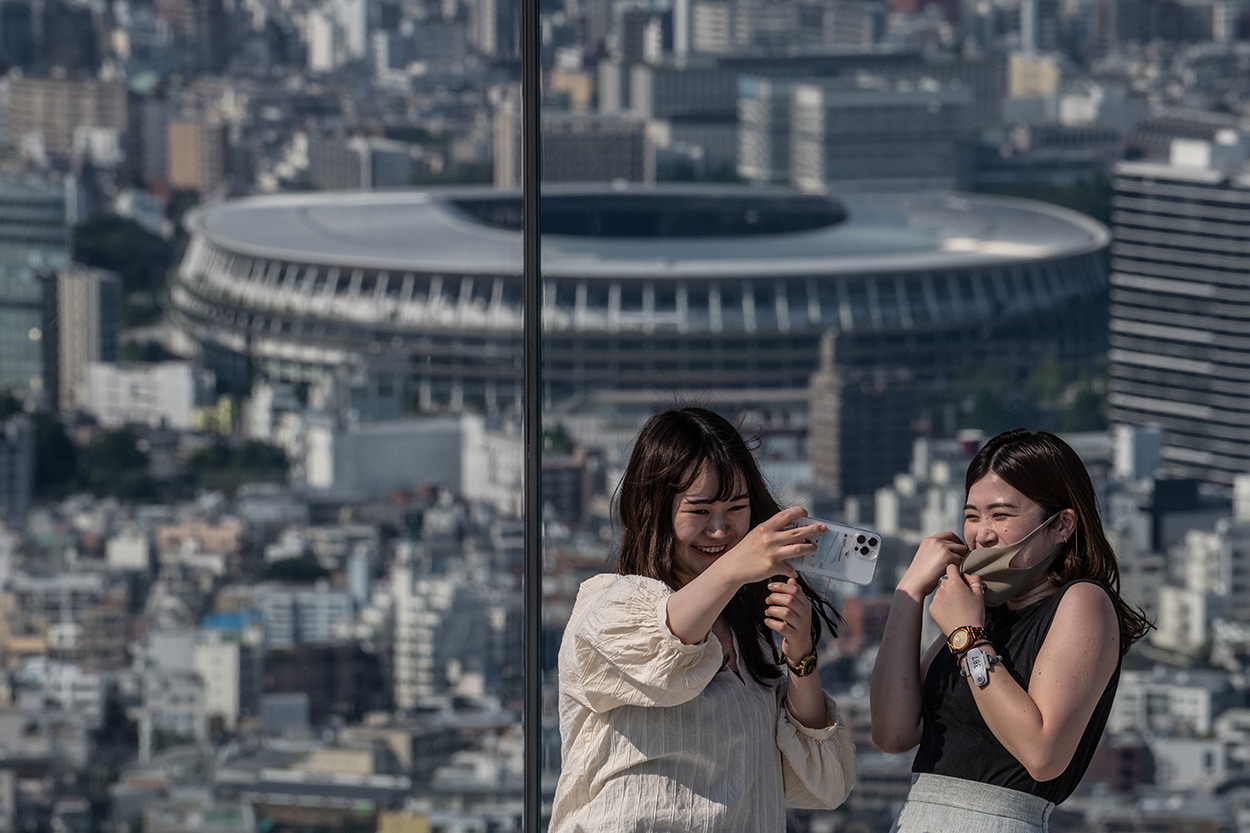 COVID-ERA COLISEUM: Selfie takers use the Olympic Stadium for a backdrop. (Getty Images)

They’re almost unrecognizable. I think the biggest change has been the artificial running surfaces, so you get much more consistency. And, of course, you’ve got all the floodlighting to get the light levels up for the color TV cameras. The whole quality of the infield now is much better. And with the massive amount of media now, the number of cameras is unbelievable.

One big (development) in all-seated stadia, I believe, are screens at every seat, so you can watch action replays not just on the big screen. That’s transforming. The other thing, of course, is the heritage use. What happens after the game? What’s the function of a stadium, because it’s very difficult to convert an Olympic Stadium into anything else, as many have proven. Heritage and sustainability have become much more important than they used to be.

What makes it so hard to ensure a stadium can be used after its Olympic purpose?
There’s only two field sports that work in an oval arena — and you have to have an oval arena for Olympics, because of the running track — and that’s cricket and Australian-rules football. I’ve been to the old Wembley (site of the 1948 Games), with the running track and everything, and you are a long, long way away from the action.

Various people have come up with various solutions to that, none of which have really worked, to be honest. The (2012) London Olympic Stadium, for example, was designed to be transformed into a (soccer) stadium, which meant very expensive sliding seats and all sorts of arrangements. It works, but at massive cost. That’s always been the problem. You can do it, if you’re willing to spend the money on it. And it doesn’t solve all the problems, just some of it.

Any best practices you’ve observed that every stadium adheres to nowadays?
The much greater attention to sustainability and to the legacy. What will happen around that site? There are obviously more buildings during Olympics than just a stadium. What happens to them afterwards? London works quite well in that respect, Munich as well. They do work as legacy sites. But others, like Athens and so on, don’t. Rio, of course, is a bad example as well. Even when they’re not being used, they’re still expensive to maintain. And nobody wants to knock them down.

The new Wembley, which isn’t an Olympic stadium, has all sorts of events taking place, and so did its predecessor, including rodeos, motorbike racing, and all sorts of things to make it economically viable, which Rio never did. It’s difficult, especially if it’s a country that sees the stadium and the Olympics as a massive image boost for those few weeks. It’s very hard for them to admit that they don’t need it anymore, that they’ve got no use for it. At the same time, like in Athens or Rio, they haven’t got money to properly maintain it. It’s a shame.

And simply converting it to, say, a music venue, is not that easy as well.
No, it’s not. And it also costs a lot of money to maintain the place. You’ve got to staff it. They all do it as much as they can, obviously, but always on edge, financially.

They’re wonderful things, Olympic stadiums, the experience of being there, especially on a final or something, is special. But it’s not the same as a (soccer) stadium, which is used once a fortnight at the very least.

There’s probably a lot that’s being swept under the rug surrounding the build of these huge stadiums and the celebration of big events like soccer tournaments and Olympics, because it would taint the image.
Even in London, there were protests. There were some beautiful (community gardens that) were moved to this completely unsuitable site. All the years they had spent improving the soil and building their sheds, etc., all of it was lost, and they had to start all over on this rough piece of land. So, even in London it happens.

Life After the Games? The Olympic Stadium’s Future May Be No Less Fraught With Uncertainty Than Its History So Far