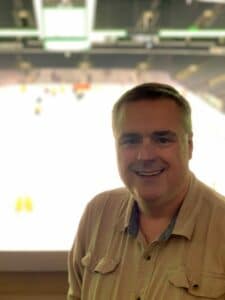 It was 2002 when Brent McNamee came to the rescue after his boss called on him to train the box office manager of the new John Labatt Centre, now Budweiser Gardens, in London, Ontario.

“I had been working at a Ticketmaster call center in Toronto since 1995,” McNamee recalled. “Part of my job was working in every Toronto box office, both permanent and temporary, for a variety of events.”

The venue’s box office manager quit just two months later, and McNamee immediately took over the role, which takes place in a city that somewhat punches above its weight.

“We are an unusual market and very successful, as we’re located halfway between Toronto and Detroit,” he said. “We are the perfect stopping point for tours going in and out of Canada. And because our building is the perfect size for our market, we get shows we (otherwise) don’t deserve.”

Asked his crowning achievements, McNamee recalled the time in 2016 when he solely handled ticketing to get 25,000 people in the door for an air show: “It was basically just me,” he said.

This was not the only challenge he’s been faced with over the years. When he first became box office manager, McNamee learned quickly that he had the final say.

“When you work for Ticketmaster, all sales are final because it’s not your show,” he said. “But in my current role, if I tell the customer that there are no refunds, I risk upsetting them. Yet, if I do a refund, the promoter will be unhappy. I had to learn how to make decisions, which is challenging and took a while.”

Handling this post pandemic has been an ongoing adjustment with Ontario’s current COVID-19 restrictions.

“Within two weeks, we had three consecutive Fridays of London Knights hockey games,” McNamee said. “The first game was limited to 1,000 fans; the second Friday we were at 50% capacity or 4,500 people. Then the third Friday we were finally at full capacity.” With 7,000 season ticket holders, McNamee and the Budweiser Gardens team had to come up with a plan to keep to the country’s capacity mandates.

“For the first game, we put 1,000 general admission tickets up for sale, and it was first come, first serve,” he said. “For the second game, we had to let 2,500 season ticket holders know they couldn’t come to the home opener. We were basically interacting with our season ticket holders three weeks in a row with completely different rules each time. Most fans understood we were working with rules we didn’t put in place.”

McNamee added that the challenges are made easier due to the community that his company and its 300 venues have created.

“There are a fleet of other box office managers and ticketing professionals who are connected via Facebook, and we all talk to each other, voicing our questions, concerns or problems,” he said. “We’re all part of a community and feel great helping others solve a problem or accomplish something great. I can always go to them and vice versa.”