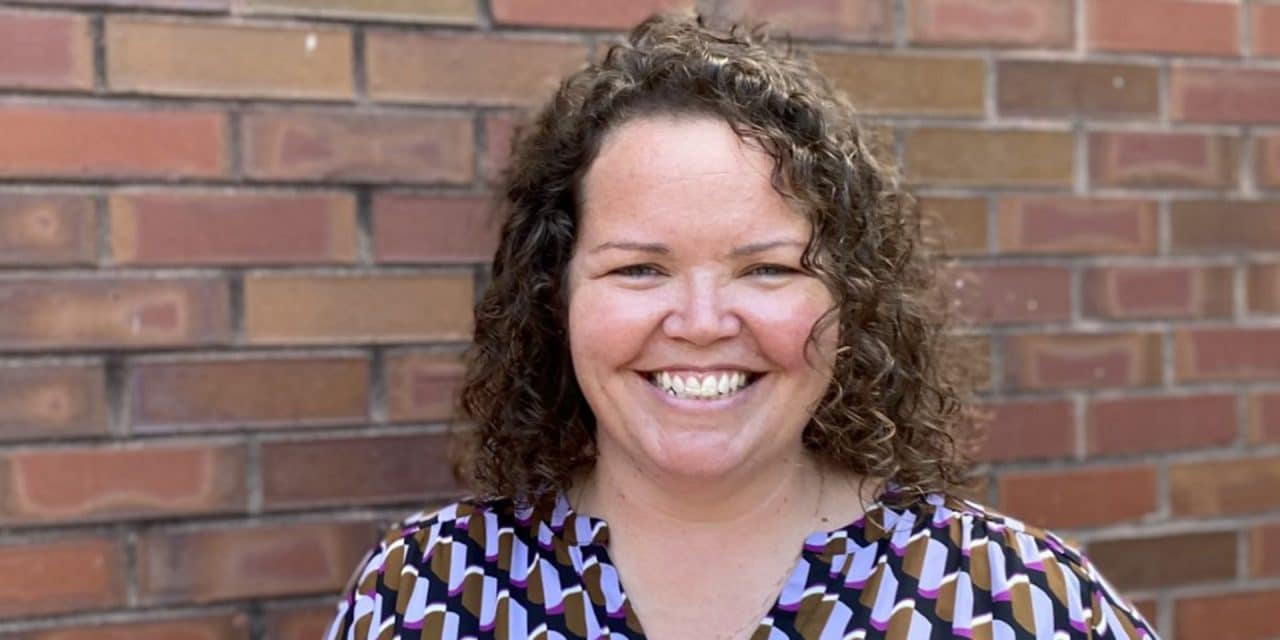 Danielle Pope, director of ticketing for Spectra at the Augusta (Georgia) Entertainment Complex,  had every intention of being a teacher. She studied math and Spanish in college, but as with many in the live entertainment business, life had other plans.

Pope was born and raised in Phoenix, and her aunt, Alycia Klein, and mother, Kit Pope, both were in the industry at the Celebrity Theatre when Pope was 15. At the urging of her aunt, who had been general manager at the Celebrity before joining Scottsdale-based R Entertainment in 2019, Pope began as an usher and ticket taker at the 2,650-capacity theater. 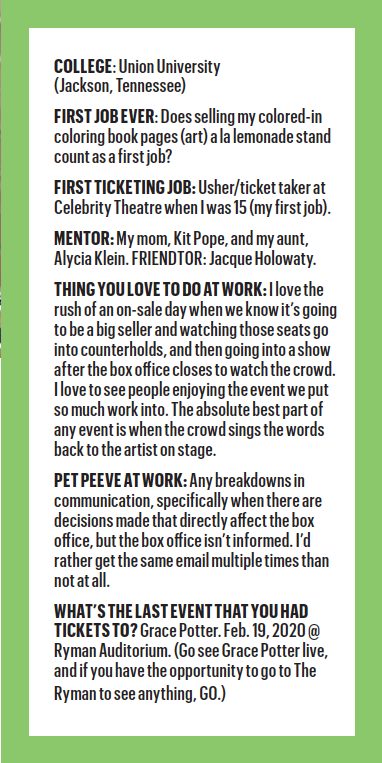 “And then my aunt said, ‘Why don’t you come into the box office and I’ll teach you how to sell a ticket,” Pope said.

She attended Union University in Jackson, Tennessee, 130 miles southwest of Nashville, and earned a bachelor of science degree in math, working in ticketing while she was there. “When I graduated I … moved to Nashville and got a job at the Grand Ole Opry as well as Bridgestone Arena,” she said.

In nominating Pope as a Ticketing Star, Marina Jaramillo, director of ticketing at the Spectra-managed Macon (Georgia) Centreplex and the district box office manager for the Ticketmaster region for Spectra, said that since early 2020, when Pope was promoted to district director, she’s played “a crucial role during COVID-19.”

“As venues have furloughed and laid off employees, Danielle has stepped up to assure venue ticket offices are still successful (and has been) … a key member in creating the everchanging Spectra Venue Management re-opening plan,” Jaramillo wrote.

Jaramillo praised Pope for her efforts in incorporating touchless/cashless patron transactions and her ability “to collaborate with others as the marketing co-lead for Spectra’s women’s network, keeping all members apprised of upcoming initiatives and events along with working diligently to highlight other female staff members and their accomplishments in each monthly newsletter.“

“She has also taken on a broader role within the company to support and lead social justice initiatives, acting as the lead for the grassroots committee within the Pride employee resource group and by serving as a regional champion throughout the company for our southeast division,” according to Jaramillo.

Pope said she wants to help ensure that “everyone has a seat at the table” in Spectra’s corporate culture.

As district box office manager, she works with other Spectra-managed venues, helping them cope with closures and furloughs that hit hard for much of 2020, although at Augusta, the entire staff of about 20 full-timers has returned to work.

Pope says her enjoyment of music and sports played a big part in drawing her into live entertainment, a passion her family helped bring about. Her mother was a major influence and her aunt — who Pope described as “a boss” — taught her three ticketing systems.

“I am a lover of entertainment and I think being in it makes it that much more exciting,” she said, noting that she attended her first concert — Crosby, Stills & Nash — at the age of 7 with her parents and that when working in Philadelphia would ride the bus to New York to take in a Broadway show, sometimes two. She’s also been to the last three Summer Olympics and had plans to go to Tokyo last year.

“Even if I weren’t in this industry, I would be going to the concerts,” she said. “It’s my escape. You can buy the music, and virtual is kind of OK, but there is nothing like seeing something in person — the sights, the smells, everything. It’s just a mood booster.”

Another industry veteran Pope counts as a mentor is Jacque Holowaty, recently named vice president of employee and guest experience for Oak View Group at Climate Pledge Arena, which is nearing completion in Seattle (OVG owns Venues Now). Holowaty was formerly Spectra’s vice president of client experience and ticketing. She also credits the International Ticketing Association with cluing her into the opening in Pueblo, which brought her to Spectra.

Pope says ticketing is undergoing a transformation that has accelerated with the emergence of the pandemic.

“We’ve wanted to be mobile-forward for a while now,” she said. “Even going to restaurants now, you need your phone to look at a menu and I think that’s only going to help ticketing in terms of going mobile, to be more mobile forward. Everything is digital, and I think that is huge.” She also thinks guests are paying more attention to procedures and precautions as venues reopen, which will make it easier to achieve the difficult task of reeducating them and modifying behavior in the new normal of a post-COVID world.

Pope says that she is a go-go-go type of person who often work seven days a week but that COVID-19  has prompted her “to take a beat and take a breath.” “I don’t really think I did that until the pandemic,” she said.