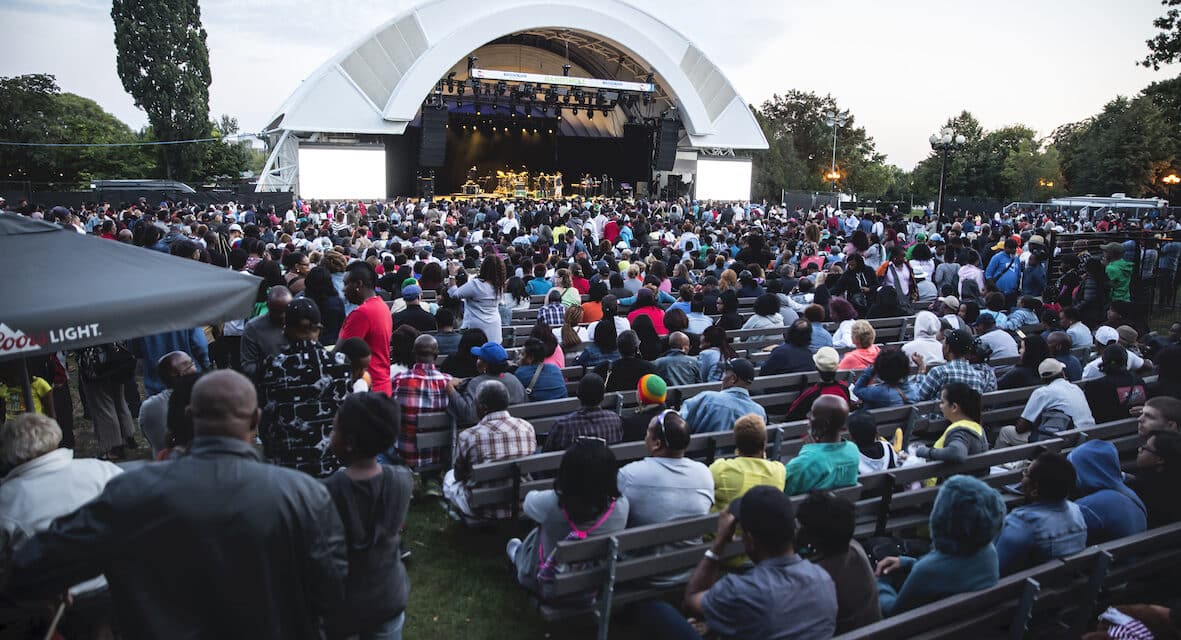 OH CANADA: The CNE Bandshell in Toronto is kicking off its summer season after two years of being closed due to COVID. (Courtesy CNE)

After a two-year hiatus forced by COVID, the CNE Bandshell on the grounds of Toronto’s Exhibition Place is about to kick off its concert season, with artists including Bruce Cockburn, Glass Tiger, Gordon Lightfoot, Marianas Trench and others.

The CNE Bandshell, whose design was inspired by the Hollywood Bowl, was built in 1936 on the city-owned property, where the annual Canadian National Exhibition (CNE) fair and midway has taken place every tail-of-summer since 1979. Concerts at the 10,000-capacity outdoor venue are free with admission and over the years have included Louis Armstrong, Johnny Cash, Blondie and Joni Mitchell.

Darrell Brown, CEO of the Canadian National Exhibition Association, the non-for-profit that operates the CNE and the Bandshell, spoke with VenuesNow about the challenges of operating the venue with scant financial support from government agencies, and why they can’t book music acts year-round on the site. Previously, he worked as general counsel for the CNE.

VenuesNow: The CNE was closed in 2020 and 2021. How did you survive?
Darrell Brown: We wouldn’t exist today if we weren’t able to negotiate some assistance from some levels of government. The fact is that we’re not-for-profit and we had a marginal surplus of about $5 million coming out of 2019, but the cost just to operate with our staff is $5 million to $6-million a year. So we were completely wiped out financially. We laid off most of our staff. Those of us like myself that stayed around took salary reduction.

The way we survived is, first of all, there was the federal general COVID relief, the wage subsidies. So we took advantage of that. We borrowed $4 million under the Business Credit Availability Program, which was backed by Export Development. We lobbied heavily at the provincial level. We ended up getting in total about one and a half million [dollars] from the Province that was dedicated primarily to paying salaries of people here. Then, through the Southern Ontario Federal Economic Development [Agency], we applied through the major festivals and event support initiative. Now, this has never been formally announced, but we did get funding through that mechanism.

But the problem with that funding was a large portion of it was only dedicated to new productions. So things like the Bandshell aren’t viewed as new productions; they’re viewed as existing programming. And so it wasn’t eligible. So we were forced to create new programming in other areas, just to get money in the door, but for the Bandshell we had to fund that on our own.

Were you able to access funding for the Bandshell through the Ontario Music Investment Fund and Canada Music Fund?
No. Events like the CNE tend to fall outside those funding envelopes for whatever reason. When you’re working more at the federal level, for example, on the heritage side, they don’t regard us as a heritage event.

There’s nothing more heritage than the CNE. It started in 1871.
So the battle for us was to find avenues to try and claw and get enough money to survive. We had absolutely no financial assistance from the City and any other agencies. Zero. When we’re regularly operating outside of COVID, we only get $5,000 from the Ministry of Agriculture. This is a bit off topic — we pay three times more in rent here than MLSE [Maple Leaf Sports & Entertainment] does, which is absurd in itself. They are a billion dollar for-profit company and we’re paying three times more. 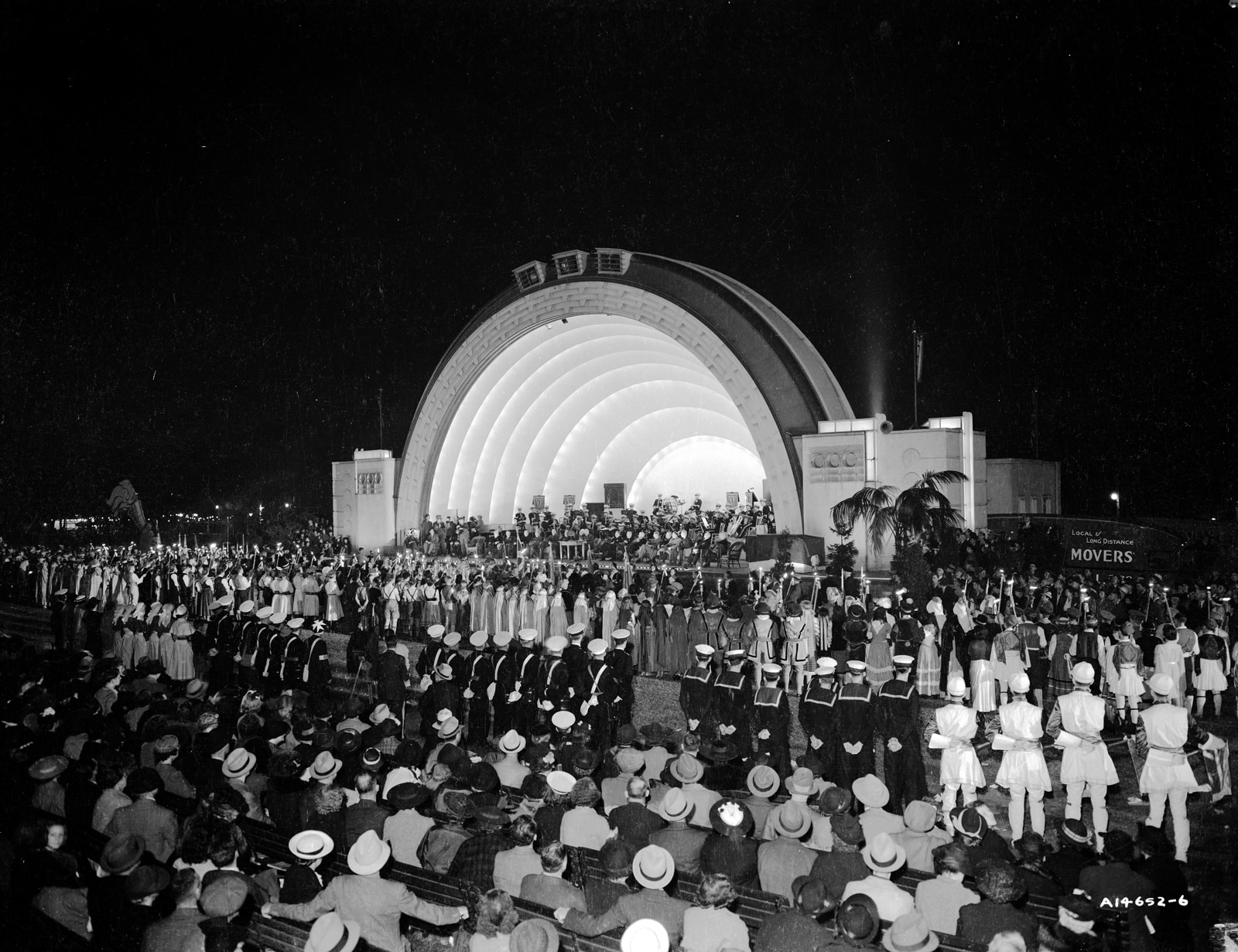 TORNTO BOWL: CNE Bandshell, built in 1936 and pictured in 1940,  was inspired by The Hollywood Bowl in Los Angeles. (CNE Association Archives)

Gordon Lightfoot, Marianas Trench, they are big draws. People pay upwards of $100 to $300 to see them at other venues and at the Bandshell it’s free with admission.
Our philosophy has always been you pay for the admission to the grounds and you attend everything for free.

How far in advance do you start to book your annual 18 days?
We have to look at it in normal times, and also how we’ve dealt with it this time around [COVID]. When we were looking at 2020, we had a lineup that was pretty similar to the lineup we’ve got this year. Bruce Cockburn’s 50th anniversary of his first album release was in 2020, so we were going to celebrate that. So when the cancellation was announced in 2020 and we said, “Look, we’d like to extend your contract for the next CNE,” and got them to agree to that. So we did that twice over, from 2020 to 2021. Obviously, there were some dropouts, but for the most part we were able to hold on to the lineup that we had planned to have in 2020. In terms of the normal cycle, it’s a year- round exercise. It’s pretty intense, starting right after the fair.

The summertime are busy months for touring artists — outdoor festivals, wineries, casinos, private shows. What do you tell the agents to attract them or are most familiar with the Bandshell, even in the U.S.?
They’re familiar. Local agencies, we work with Feldman, APA, Paquin, Sakamoto, and [tribute band agency] The Booking House [for other CNE stages], then the U.S. agencies Paradise, ICM, Creative Artists [Agency], WME and United Talent [Agency] are the ones we generally deal with. They all come with proposals; they know who they’re representing and what circuits they’re on. So part of it is an exercise in soliciting from the agents what they think they have available. There’s a few conferences our staff will attend in the normal course that didn’t happen this time around because we were really focused on not spending money.

Our total budget for the entire event — I’m talking about the whole of the CNE this year — $37.5 million dollars and spend on the performer side about $2.5 million. Keep in mind, we’ve got six stages. It’s not just a Bandshell. Some of those [stages] don’t cost us very much. For example, we have an International Stage where this year we’re bringing in people from Hawaii, India, Mexico, Cuba, Brazil, Saudi Arabia, Greece, Germany, India, Uganda, Korea. For that stage, we spend the year researching festivals worldwide, and who’s performing in different venues and we try and access through community groups acts that have performed in those festivals. Generally we don’t pay a lot of performers fees for that stage; it’s more bringing them over as an experience, paying for the transportation, their hotel. Usually, we try and piggyback on them traveling to other events.

Why is The Bandshell not used from May through October? Why only 18 days during the CNE?
We haven’t had success in negotiating an agreement with Exhibition Place. We were informed that there’s a moratorium on booking music at the Bandshell outside of the CNE because it’s to be used as a picnic area (laughs). What’s been communicated to us by Exhibition Place is that any event at the Bandshell would interfere with his operation. Well, this is absurd. The Bandshell is a heritage site. It was established for the express purpose of promoting music.

The CNE Grandstand was demolished in 1999 (built in 1948), where everyone from David Bowie to Guns N’ Roses played. Is the Bandshell a historically protected structure?
Yeah, absolutely. It is a heritage structure. I don’t see them tearing it down, but it’s absurd the current policy position and that has to change. And technically, when we’re in these negotiations commencing September, it’s not about anything outside of the CNE period, but we’re going to try and add on a few issues that would allow us to do something more meaningful at other times during the year.