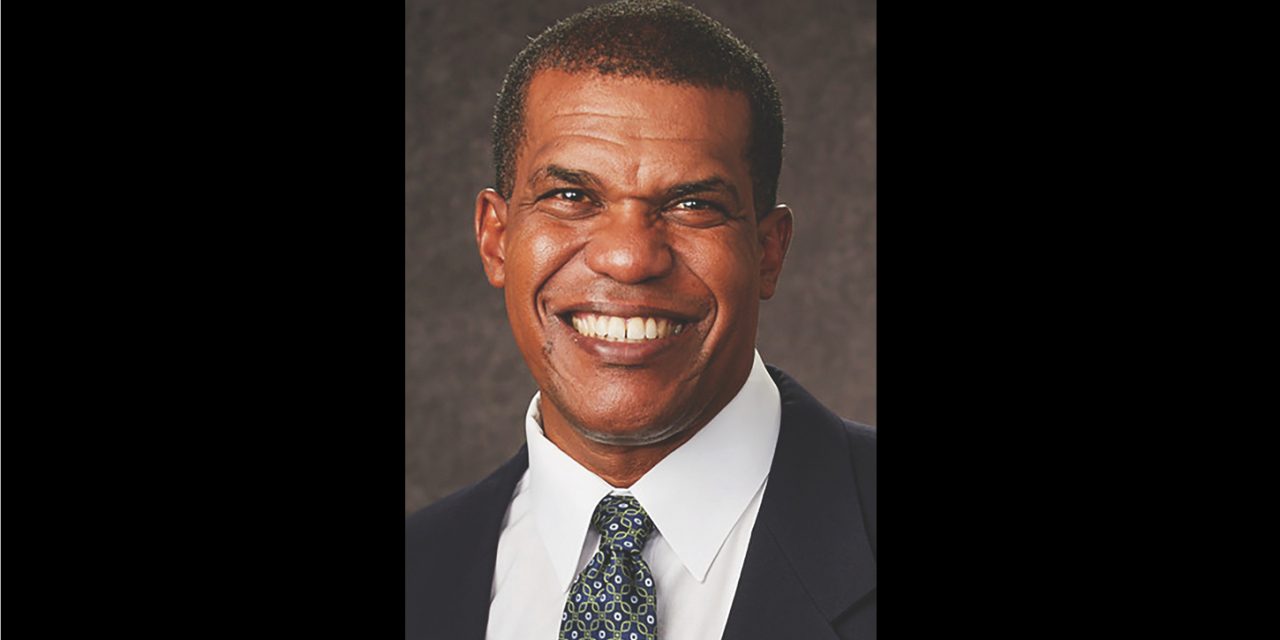 Sporty Jeralds: “I want to encourage other people who don’t look like me to just give people a chance.”

‘It just takes people being intentional’

Sporty Jeralds is a highly regarded venues executive who managed the Charlotte Coliseum for 15 years. A native of Fayetteville, N.C, Jeralds earned a bachelor’s degree in criminal justice at Guilford College, a master’s degree in public administration at the University of North Carolina and a second master’s in sports management from the University of Massachusetts in Amherst. He began his venues career in the early 1980s at the Hampton (Va.) Coliseum. Jeralds is the author of several books and is now a full-time senior clinical instructor at the University of South Carolina’s Sport and Entertainment Management Department and also works with the Charlotte Hornets in the team’s community relations department. He and his wife, Teresa, are the parents of two children, Jazmine and Jacob. Jeralds connected with VenuesNow reporter James Zoltak to discuss challenges facing the industry, including the unprecedented effects of the coronavirus pandemic, the role venues play in their communities, diversity issues and the importance of mentoring.

How did you find your way into the venues industry?
I was a major in criminal justice and I knew I didn’t want to carry a gun around all my life … and so I decided if I’m going to be in the criminal justice system I want to go to some of the higher levels. … I went to the University of North Carolina at Chapel Hill and I had a work-study job in the county manager’s office in Raleigh and it really wasn’t engaging for me. They gave me some projects, but I just really didn’t get excited and so I kind of fell back on my love for sports. … The next year I went to the University of Massachusetts for their sports management program.

What’s your sense of where things are headed for venues and the live entertainment industry in the new coronavirus era?
We’ve been faced with these challenges in the past where we thought the industry will never be the same. I remember when MTV got started and people were like, everybody’s going to watch videos, they’re just going to stay home and watch videos all day and we found that that hasn’t been the case. 9/11, that disrupted our industry tremendously. Everybody was like, who wants to go to an arena, everybody’s going to be scared. This is unprecedented, but we’ve had these disruptions in the past. I do think it’s going to take quite some time, and I’m thinking three to four years before we can get back to that new normal that we will all sort of embrace.

A couple of my colleagues, Todd Koesters and Steve Shapiro, down at the university with me, they just conducted a study and they’re finding that obviously there’s going to be a lot of hesitancy, even when the restrictions are lifted, for people to go back into these spaces. With a name like Sporty, I love sports. I’ve got (Carolina) Panthers season tickets. I’ve got Hornets season tickets, but here again, coincidentally today the Panthers sent out a notice to the season ticket holders (that) you can come back to a few games or you can opt out altogether and we’ll just apply your money to 2021, and I’m going to take that opt-out option. I don’t feel comfortable, even as a venue person. I know they’re going to do a lot of safety measures and things like that, but I just don’t feel comfortable being in that space. I think the vaccine is going to be critical to getting back to that normal.

Venues have long been centers of public life. We’ve seen them used as field hospitals, temporary shelters, distribution hubs for food and other supplies and testing centers, as well as drivers of economic activity. Do you think taxpayers and government officials might come to view venues as more than just places where people take in sports or concerts and recognize those integral roles?
Hopefully, people will realize the value that our venues have in this society and they’re not just for a basketball game or a football game and I think that’s what I love about an arena, per se. I’m an arena guy. I love the versatility in all the events that we did in arenas, from Davis Cup tennis to the Rolling Stones, to NBA basketball, Final Four. We hosted a Mother Teresa event in the (Charlotte Coliseum). Every day was kind of something new and interesting. And I think there again, normally with the events that we hold, we will be able to tap into at least one event that someone likes. It might be the Royal Lipizzaner Stallions, you might be a horse person, but at least we had that one event that you could come and say my tax dollars were at work and I’m glad they brought that event here, as well as some of these other things.

Will sport and entertainment, that side of the industry, pull venues into being ready or will venues be waiting and ready for events to come? I guess it’s kind of a chicken or the egg kind of question.
Most of the venues are sort of promoter-driven in that we have to rely on people to bring events to us, the Live Nations, the AEGs, the Feld Entertainments of the world. I think the buildings are ready. I think they’re anxious to get back on track, but to that question, I think that the venues will be ready, (but) I don’t think we can drive that chicken and egg theory, so to speak. We’ve got to wait for people to bring things to us, but when they do, when it starts getting active again, every building manager I’ve talked to is ready to go.

Do you see a need to broaden representation of people of color, as well as women and other walks of life and stripes in this industry and could you speak also to why diversity is important?
Thanks for asking that question. It’s something that’s been on my mind and heart for many, many years that I’ve been in this industry. I can tell you that in 1984 when I joined the International Association of what was then Auditorium Managers, IAAM, we had a way of getting together, all the African Americans would get together in someone’s hotel room, quite frankly. And I remember Victor Cohen and I — Victor’s a good friend who’s down in Mobile, Ala. – Victor and I were young guys, 23, 24 years old, the excitement I can remember in that hotel room, like man, me and Victor are going to part of something that is really going to be awesome. There were about 20 of us in that hotel room that day and it was just a way to say hello to a fellow person who looked like you, to collect their information. If you needed to call someone, here’s someone who you knew you could reach out to. I can remember literally probably 20 years later we still got together, but 20 years later, in the hotel room, there were 20 people. People leave the industry, people get fired, things happen, but it was disheartening in some respects, 20 years later, that that number hadn’t grown to 100 or 200.

So, to answer your question, we’ve got to do better. It’s something that I’ve tried to do, if people have reached out to me, and it just takes people being intentional. … Andy Greenwell was a 50-year-old white guy, and I was a 25-year-old black guy, but Mr. Greenwell saw something in me … that I didn’t even see in myself. That’s what I’ve tried to do as a mentor. … And then I’ve had a great mentor in Steve Camp, a little bit older white gentleman who believed in me as well. Those guys really have shaped my career and I want to encourage other people who don’t look like me to just give people a chance. Don’t say we advertised, and we didn’t get applicants. Where are you advertising at? Ask that question. Are you going to historically black colleges and universities to try and find African American candidates? …

And women, I’ve had an opportunity in my career to mentor so many young ladies and with all my mentees I just appreciate they are so much smarter than me, they are so much better than me. I’m so privileged that they even are willing to consider me a mentor, but we’ve got a long way to go to with women getting the opportunities that they deserve in our industry as well.

I always operated from the standpoint as a venue manager, I tried at least to make sure for instance with our event staff – the ushers, the ticket takers, all of those people that at least we had representation equal to the population of our city. So if we’re 37% African American in this city, it would seem to me it would be sort of natural to have 37% of the people who are working in the venue to be African American.

What can students do to adapt to these unprecedented times?
One of the main things that I’ve encouraged people to do is do some evaluating and learn a new skill. NBA China: The NBA is going to move internationally at some point. I had an opportunity to speak in Taiwan back in 2006 and … they had just built an arena in that country and I thought about it, man, if I knew Mandarin, I could come back and make a lot of money as a consultant because they really didn’t have the skill sets to operate that venue. So that’s something. Learn a new language, learn sign language. Really think entrepreneurially. That’s one of the things I think our students don’t do enough of is to figure how they can be the boss instead of working for the boss. This is a great time, the pandemic gives you a great reason to figure out, what business can I start for myself?

What advice would you give future students considering getting a sports and entertainment degree (and) how do you motivate the next generation when things seem so bleak?
We’re always going to have a need for these venues for live entertainment, so I think the industry is always going to be there. Obviously, as your grandmother would say, the cream rises to the top, and so you’ve got to be exceptional. I work with the Charlotte Hornets, help them out some still, and I can tell you most of the time when we have an opening with the Hornets, they’ll get at least 600 applications for one job. There have been times when they’ve gotten as many as 1,200 applications for one job. You’ve got to start your freshman year. You can’t wait until you’re a junior … to get an internship. I’ve talked to young people, even in high school you need to be intentional about opportunities, volunteering, showing people early on that you’re really committed to this industry and that’s one of the ways that you can cement yourself to the industry.

The second part of the question …  one thing I would say, and I’ve sent this to a few of my students, write down, and I told them I have few prompts, that they can use, and the prompts are: “2020 was tough, but …” and start the paragraphs off with that, or “I hated going through what I did in 2020, but these are the things I’ve learned.” So it’s really a reflection of looking back in 2025, when you look back at 2020, where you will be and what are the things you’ve learned and I think this is a great opportunity for young people to build in that resiliency that they’re going to need.