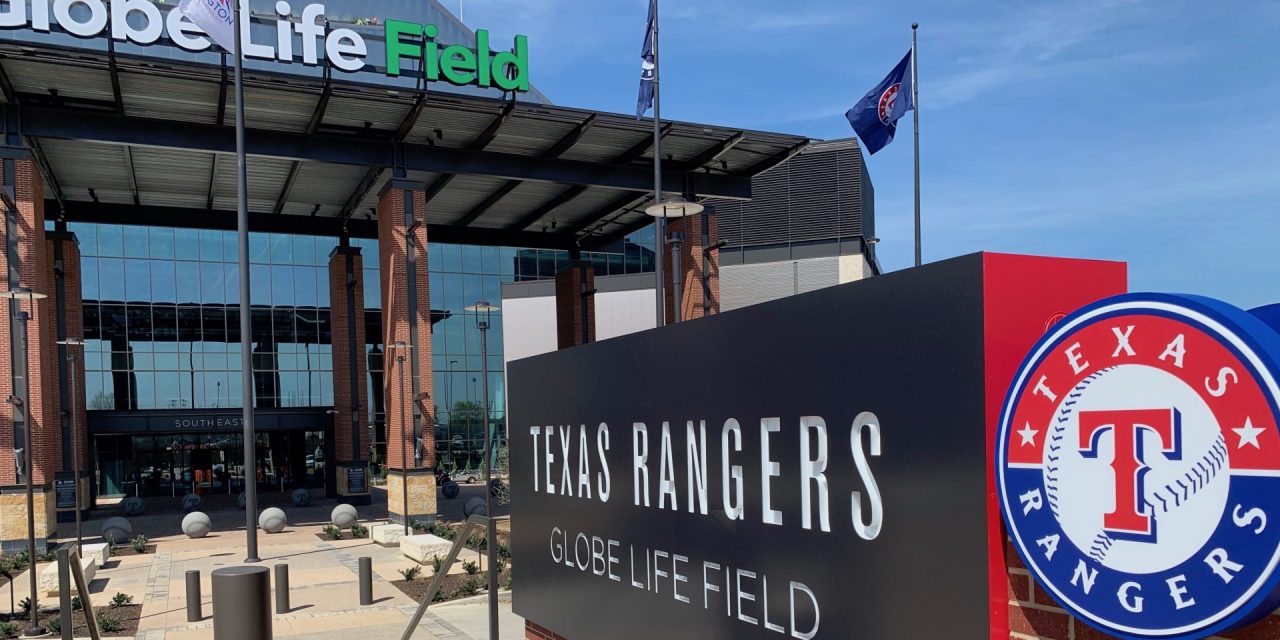 The concert scheduled to open the Texas Rangers’ Globe Life Field was postponed, along with most other sports and music events. (Don Muret / Staff)

Execs speak on how COVID-19 rolled across the business landscape

Sports and entertainment venues will mark March 12, 2020, as an inflection point. On that Thursday, with fear escalating over the spread of the COVID-19 virus, multiple sports leagues canceled or postponed their seasons.

The day before, many NCAA conferences had put a halt to their men’s basketball tournaments, some in awkward fashion. The Big East Conference, for example, waited until halftime of the St. John’s-Creighton game to cancel the event at Madison Square Garden. (The NCAA later canceled all of March Madness, as well as most spring sports seasons.) Then the NBA suspended its season.

Over the course of Thursday, the number of postponements and cancellations came crashing down in dizzying fashion.

For live music, it was the same thing. Live Nation and AEG Presents, the two biggest concert producers, pulled all tours off the road, including the Rolling Stones, resulting in a chaotic situation for arenas, stadiums, talent buyers, agents and promoters having to reschedule dates.

To address the virus issue, promoters and agents put their competitive differences aside to form a task force and work together to reschedule the hundreds of live shows affected by the shutdown.

“We’re best to work together on dates and be flexible,” said Peter Luukko, co-chairman of Oak View Group and its Arena Alliance, a group of about 30 big league arenas that combine efforts on programming among other services. (OVG also owns VenuesNow.)

New venues opening this spring such as Riverfront Park in Wichita, Kan., and the Steven Tanger Center for the Performing Arts in Greensboro, N.C., got caught up in the web surrounding the virus and the wave of uncertainty over what comes next as they wonder when they will be able to open their doors.

A crowd of 40,000 was expected to fill the $1.2 billion stadium in Arlington. On March 12, the event was postponed until a later date. As of press time, the start of baseball season has been delayed until potentially June 1 after a short resumption of spring training.

OVG Facilities, which has a booking deal with the Rangers, will work closely with Sean Decker, the team’s executive vice president of sports and entertainment, to help reschedule the concert, Luukko said.

“From a touring standpoint, as difficult as it is, there are plans to reschedule shows and facilities will get new dates,” he said. “There are some cases where maybe it won’t happen. There are still so many unknowns.”

It’s due in large part to a shutdown that is unlike any other in the business, facility managers said.

Some pointed to similar situations they experienced after 9/11 and work stoppages in sports. But nothing compares with the virus and the havoc it’s caused in the industry over the past few weeks.

“I was around the LA riots, which was a crazy experience, but it was isolated,” said Luukko, who ran the Los Angeles Memorial Coliseum in the early 1990s. “I’ve dealt with strikes and lockouts. But to see that basically all of sports and entertainment has been shut down is unprecedented.”

“I’ve not experienced this before … especially when you consider the number of local communities, anything from school districts, all the way up to states mandating how things are going to move forward,” Mayne said.

To slow the virus’ spread, the Centers for Disease Control and Prevention on March 15 recommended against having gatherings of 50-plus people for the next eight weeks.

That essentially covers the entire live entertainment industry. The new guideline came just a few days after some states and cities restricted gatherings to 200 to 500 people.

Several states shut down all bars and restaurants for a few weeks, including Pennsylvania, which affects entertainment districts such as Xfinity Live!. It sits next to Wells Fargo Center, Citizens Bank Park and Lincoln Financial Field in the South Philly Sports Complex.

The shutdown translates to the loss of tens of millions of dollars for teams and facilities, which could go much higher depending on how long it lasts. The key question is whether arenas, stadiums and clubs can recoup that money, sources said.

“We’re researching that issue now and every building is doing the same thing,” Luukko said. “At this point, we don’t know.”

In some cases, the answer is no, according to some members of IAVM that started making calls to their insurance carriers after the virus first started months ago in China. Some policies cover diseases, but a pandemic such as COVID-19 is not included, Mayne said.

“For the most part, venues and promoters are on their own,” Mayne said.

Multiple NBA and NHL teams that run arenas committed to paying their part-time workers during the shutdown.

In Chicago, the Blackhawks and Bulls together will pay about $3.5 million to United Center hourly employees, Blackhawks owner Rocky Wirtz told Chicago sports talk station The Score 670 in a March 16 interview. Each team had seven regular-season home games remaining.

Concessionaires, by comparison, are in a tough spot for compensating their game day employees working the food stands and merchandise outlets. Some get paid by commission. Depending on the deal, the companies themselves must cover operating expenses in addition to paying a percentage of sales to their clients.

Food consultant Chris Bigelow was in Columbus, Ohio working on a long-term capital improvement plan for Nationwide Arena when games started getting canceled. He was part of a group set to attend a Blue Jackets game on March 11 until the NHL contest was called off.

“From the building side, one (team executive) told me they would work on deferred maintenance, projects that they would normally do in the offseason,” Bigelow said. “For the concessionaires, that’s not a lot of (work). The hourly people are going to get laid off.”

Food providers could potentially invoke “force majeure” clauses in their deals with teams, which address the issue of certain events beyond their control that prohibit them from fulfilling their obligations under those agreements.

Those clauses are part of all concession contracts, said Paul Frascella, another food consultant.

“They’re written in different ways, but in some cases, it could allow the concessionaires to ask for an extension for the amount of time that business was suspended,” Frascella said. “There’s usually a notice provision from one party to another on how they handle business operations going forward when they resume. It hasn’t clicked in yet, but it will. That’s what I’m anxious to see, how this is all going to present itself once we get over the hump. No one’s paying attention to it now. It’s too soon.”

Bigelow questions whether those clauses can be enforced. “I’m not an attorney, but I don’t think there’s anything the concessionaires can do,” he said. “Going forward, though, this may change” contract terms.

In the meantime, food providers have donated supplies to local food banks and other charitable groups to avoid fresh produce and other perishables from going to waste after all of the mass cancellations at public assembly facilities.

Sports architects and builders have curtailed travel and are working from home, said officials in those sectors.

“We’re used to working with clients all over the globe and are well established to communicate virtually,” said Denise Drach, head of marketing and business development for Rossetti, a Detroit design firm. “We’re open for business and projects are continuing. Our goal is to continue working with our clients as seamlessly as possible.”

Turner-AECOM Hunt and Mortenson-McCarthy, the joint ventures building NFL stadiums under construction in Greater Los Angeles and Las Vegas, respectively, remained on the job to complete those two projects by midsummer.

The same is true for NHL arena developments in Seattle and New York and for the Sphere, MSG’s high-tech project in Vegas. All three buildings open in 2021.

In California, SoFi Stadium, the $5 billion home of the Los Angeles Rams and Chargers,  got an exemption from the shelter-at-home directive put in place by Gov. Gavin Newsom. As part of the new restrictions, project officials are requested to add more toilet and hand washing stations; perform deep cleaning of the job site; hold smaller, individual safety meetings; and keep separation of 6 feet or more between workers.

Crews are asked to bring a lunch from home and stay away from crowded food trucks and coffee shops.

Those guidelines apply to all building trades in California, according to a bulletin issued by the state chapter of the AFL-CIO. (In Los Angeles, Dodger Stadium is undergoing a $100 million renovation).

In Arlington, a substantial number of construction personnel at Globe Life Field were still working on finishing touches, mostly in the clubhouses and on the field, said team spokesman John Blake. Most of the Rangers’ front office was working from home, Blake said.

If there’s a bright spot for the Rangers, the shutdown allows them to complete construction without rushing to get the building open in March. “It buys them a few weeks of time; it could be a blessing in disguise,” Bigelow said.

As an educational tool, IAVM and the Arena Alliance are both providing guidance and forums for members to get the latest updates and share information on their respective facilities. Last week, IAVM conducted six town hall webinars separated by building type. As of presstime, VenueConnect, the group’s annual summer convention and trade show, remained on schedule. Dates are July 26-29 in Long Beach, Calif.

“It will be fluid with restrictions left in place or lifted,” Mayne said.

Editor’s Note: This story has been updated from the print version.