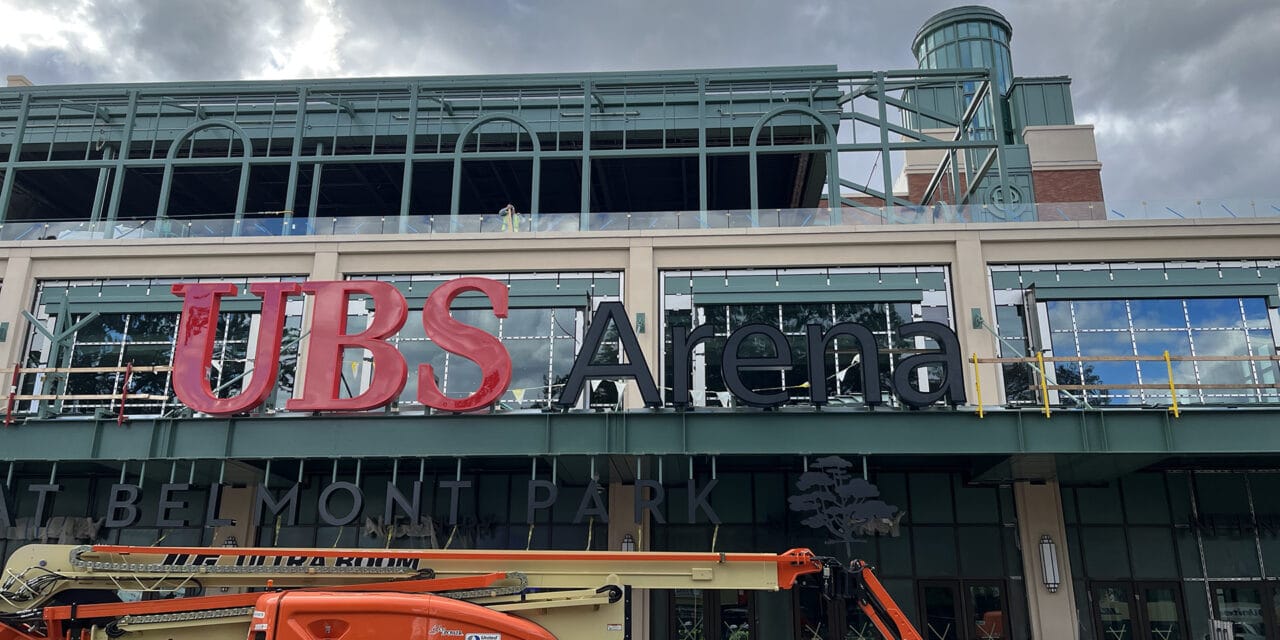 UBS Arena, the new home of the NHL’s New York Islanders, will be ready to host the team’s Nov. 20 home opener against the Calgary Flames, officials behind the Elmont, N.Y., project reaffirmed during a day of panels and tours at the site Thursday.

A playful atmosphere pervaded the conversation, as the parties acknowledged that, despite their optimism, plenty of work remains to get the 17,500-seat arena open on time.

Early in the panel, Ledecky, who moderated the discussion, asked Leiweke the million-dollar – or in UBS Arena’s case, the $1.5 billion – question: “Is it on time?”

“You think I’m going to say anything but ‘yes’ with the commissioner sitting here?” quipped Leiweke to audience chuckles. “I always tell everyone we’re going to open by November. Gary’s the only one that comes back to me and says, ‘Which year?'”

Moments later, setting the jokes aside, Leiweke explained that he and his partners on the project have added a second shift and are “working overtime” to ensure the arena opens according to plan.

“It’s math,” he said. “We can tell you to a day what has to get done by each subcontractor in order to get to the finish line. … On behalf of all of us up here, one thing you can absolutely bet the house on — because we did — is we’re opening up on Nov. 19 with a private concert for charity. We’re going to have a wonderful hockey game on the 20th. And, on the Sunday night after Thanksgiving, we’re going to take the hottest artist in the world and he’s going to finish his North American tour to open up the building to music.”

Leiweke, always one for intrigue, added, “And you all figure out who the hell it is, because I didn’t say it.” (The earliest concert officially announced for the arena is country artist Eric Church, who will play there Dec. 4.)

One key theme of the discussion was the patience and loyalty of both the Islanders organization and its fans, who have stuck with the team as it has searched for a permanent home. After beginning play at Nassau Veterans Memorial Coliseum when it opened in 1972, the franchise moved to Barclays Center in Brooklyn while Nassau Coliseum was renovated during 2015-17, split home games between Barclays and Nassau during 2018-20 and then played the 2020-21 season at Nassau before the move to UBS Arena. 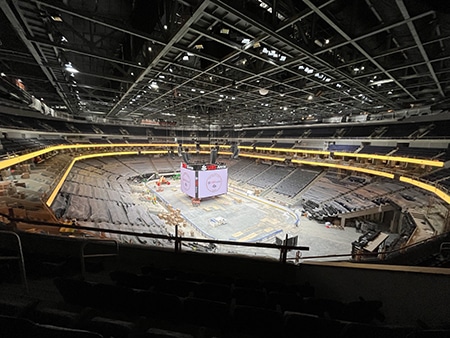 “The commitment that has been made, not just to the Islanders but to the building a couple of hundred feet away, is nothing short of sensational,” Bettman said. “It represents not just jobs and an economic engine, it’s a hub for people in the metropolitan area, particularly on Long Island, to come together around, particularly as we try to normalize things. And it ensures that the Islanders will be a strong franchise forever.”

UBS Arena is “good for the league,” Bettman said, enticingly adding that “we can bring an All-Star Game here.”

“The arena is for the fans,” Malkin said. “The sightlines, the height of the ceiling, the configuration, the intimacy. Our goal is that you feel the emotional power that we together feel at (Nassau) Coliseum, but you get the energy and the technology and the excellence of that state-of-the-art undertaking.”

“Hockey’s our team, but music is our second team,” said Ledecky, prompting Leiweke to detail how several factors, from premium back-of-house accommodations for artists to gargantuan loading docks that will reduce production costs, will entice talent to play at UBS.

“Populous came in and did a phenomenal job with the bowl,” Leiweke said. “Chris Carver might be the most ingenious architect ever for trying to figure out how to create a phenomenal atmosphere for hockey and keep that noise in, but an acoustically perfect building for concerts, and try to take the reverb out — and that’s what this building did.”

Meeting with reporters after the panel, Leiweke noted, “You’re sitting there, trying to take out the reverb and the bounce back and make the acoustics perfect, but you gotta make the acoustics really loud during the hockey game.”

The challenges extended beyond programming and design. The UBS Arena team had to contend with state and local government officials, pandemic-related construction delays, and an antiquated electrical grid system that complicated its sustainability goals — even if, Leiweke confirmed, “the building will be carbon-neutral within a few years of opening.”

And, naturally, the principals involved in the process sometimes disagreed. In the early stages, the arena was “a spaceship” that didn’t mesh with the aesthetic of the Belmont Park campus, where thoroughbred racing dates back to 1905.

Projects like UBS Arena succeed, Wilpon said, “because there’s a collaboration and there’s a freedom of expression and there’s an ability to say things to each other that you’re not scared to say. … We were able to come out of that room with a single focus.”

Summing up the panel, Bettman called UBS Arena “the ultimate collaboration,” praising the team behind the venue for its investment “so that the Islanders’ arena can host the best concerts in the world and can someday hoist the Stanley Cup — which is something I can’t wish for for them, but I know all of you can.”