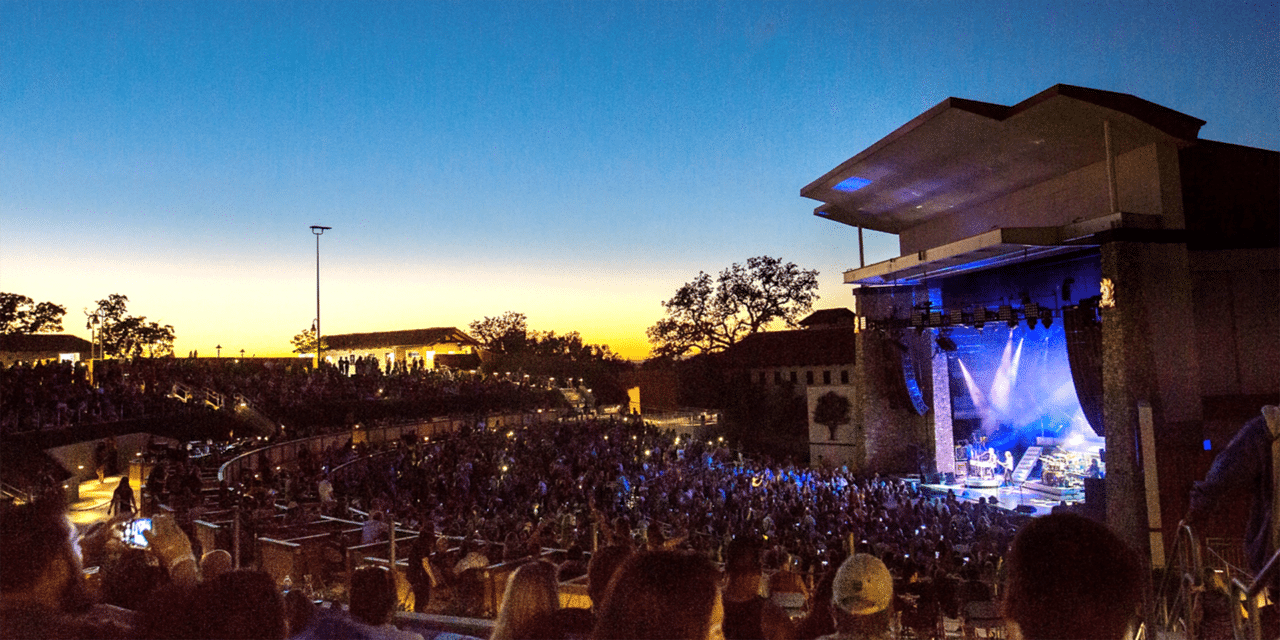 After a less than vintage year, venue to launch concert slate July 31

The popular pairing of wine and concerts returns to the Vina Robles Amphitheatre this summer with a slate of shows set to play the intimate shed in the central California community of Paso Robles.

The 3,300-seater, which opened in 2013 at the Vina Robles Winery and is booked by Nederlander Concerts, had logged a record year in 2019, and 2020 was shaping up well before the pandemic struck the U.S., according to General Manager Paul Leatherman.

Other bookings announced are:

The venue typically does 25-30 shows a year, Leatherman said.

“We certainly hit another level with the (caliber) of talent that was coming through the building,” he said of 2019. “Finally, after years, it’s paying off nationally. We had Avett Brothers and Kacey Musgraves and a lot of tours that would go to larger buildings stop by, which was great.”

Last year, the venue and Nederlander brought in local bands for a streaming series on Facebook Live called “Wind Down Wednesdays” as a way of remaining engaged with fans.

Direct competitors in the growing central California market are few, Leatherman said, and shows on sale so far are faring well.

The California Mid-State Fair, also in Paso Robles, typically features a strong entertainment lineup during its two-week summer run, but given its concert capacity of 15,000, the fair and amphitheater don’t compete for acts, and past shows at Vina Robles like Chicago that were staged during the fair run did well regardless, Leatherman said. The Bonamassa show will take place during this year’s fair run.

“As long as it’s not a direct conflict in genre (the fair skews heavily country), there’s enough interest in the area to allow them to have a great show on the same night as we do,” he said. “Some people might consider the Santa Barbara Bowl a competitor, but it’s a different scale and far enough away (that) it’s a little apples and oranges.”

The outdoor Avila Beach Concerts at the Cove, at the Avila Beach Golf Resort, are also in San Luis Obispo County, but Leatherman does not consider that series a direct competitor.

“It’s a little different vibe here than with a pop-up stage in a field,” he said. “We’re kind of on our own here.”

Nederlander Concerts talent buyer Eric Milhouse, who has booked most of the shows at the amphitheater, said more dates will be announced in coming weeks, for a total of about 15 on the year.

“One thing we’re dealing with now is just a scramble to get everything to happen this year,” he said. “There are a lot of people that want to work this year, but because of the venue’s location we are definitely reliant on touring. We can’t really do a lot of shows where bands just come up and do one show. The financial model only really makes sense when you’ve got 10-25 dates thrown together.”

As an example, the Fitz and the Tantrums show was originally supposed to be in August, but the day the venue announced it, an agent informed Milhouse of a major COVID spike in the Pacific Northwest, which threw that part of the band’s route in doubt. In turn, it affected other dates elsewhere, Milhouse said.

“So we scrambled last minute to put it way out in October where they could anchor it around some other dates (and feel) more confident that COVID-19 wouldn’t affect those shows,” he said.

Such is the life of a talent buyer in the midst of the pandemic.

“I wake up every day and it’s just the most strange dream,” Milhouse said. “It’s surreal. There’s no other way to put it. We’re scrambling. A lot of us are missing our support staff, we’re missing half of our team. We’re missing our paychecks. It’s really challenging, but at the same time, our company has been quite busy because we said we’re not going to wait. We tried to move as many shows as we could down the line and we’ve been active with drive-ins and pod shows.”

Milhouse said that since Vina Robles is relatively new, booking the space is a matter of bringing in acts that are more or less sure things while at the same time trying new acts that appeal to various audience segments.

“We, along with the venue, send out surveys after every show and we go through them painstakingly,” he said. “We’re really just trying to listen a lot. A lot of the stuff we’ve done, it’s like a test.”

“We definitely pay attention to when (California Polytechnic State University in San Luis Obispo) is in session or when there might be students around,” he said. “We’re impacted by the fair a little bit, but we’ve done a great job creating this unique venue that’s kind of its own entity. We’re not really competing with much.”

The venue has gone to contactless technology where possible, including ticketing and concessions point of sale systems, Leatherman said. It has also attained GBAC Star accreditation.

“We’re still waiting on, like everyone else, the June 15 California (reopening) guidelines to kind of ascertain to what level we need to be regarding staff and patrons and backstage and everything,” he said. “It’s not going to look the same, but we’re still waiting to see how different it will look.”

Among details to be worked out will be how many people are allowed in seated concessions areas, which include the Plaza Bistro & Bar, Suendero Bar and the Terrace Club, which is reserved for premium seating patrons.

It’s possible there will be menu changes as well, with more grab-and-go items, Leatherman said.

“Essentially we have a Plan A, Plan B and Plan C,” he said, adding that Plan A is business as usual and Plan C is the most restrictive, with things like sealed beverages and prepackaged food.

With more than 250 wineries within a half hour’s drive of Paso Robles, the main industries in the area are wine and tourism, and the main employer is Cal Poly to the south. The venue draws from the local market but has also been pulling in increasing numbers from the Bay Area and the Southern California markets as visitors add a concert to a multiday stay in the area, Leatherman said.