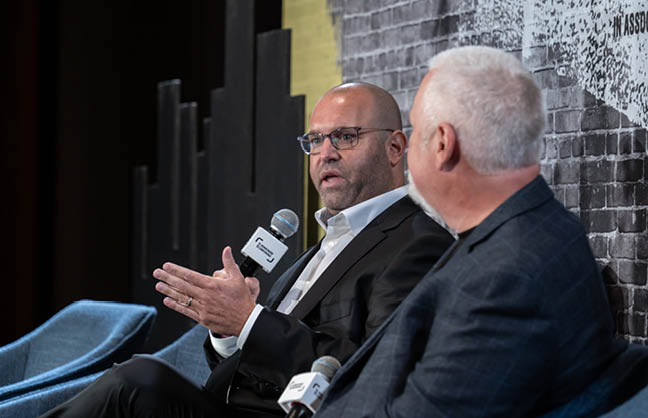 Darren Pfeffer says the key to MSG Live’s robust 2019 is constant innovation in how the company books its venues. Pfeffer spoke in an on-stage interview at the VenuesNow Conference on Tuesday, MSG Live operates the 5,600-seat Hulu Theater at MSG, the 2,894-seat Beacon Theatre; the 3,000-seat Chicago Theatre; 5,8000-seat Radio City Music Hall; LA’s Fabulous Forum, which holds almost 18,000 people; and the 20,789-seat mothership, Madison Square Garden. When Pfeffer joined MSG Live, the company was booking the venues together. Pfeffer split them up so that one team is responsible for one venue, another team responsible for another. “It’s been a great success,” he said. “We make more calls this way instead of waiting for our phone to ring.” There is still synergy between the teams, and no one is working in the dark. “When it works to book an act in several of our venues, we try to […]
To access this post, you must purchase Subscribe to VenuesNow – 1 Year, Subscribe to VenuesNow – 2 Years or Subscribe to VenuesNow – 3 Years. If you are already a member of VenuesNow, please login here: log in