Winterfests at ballparks expand in scope 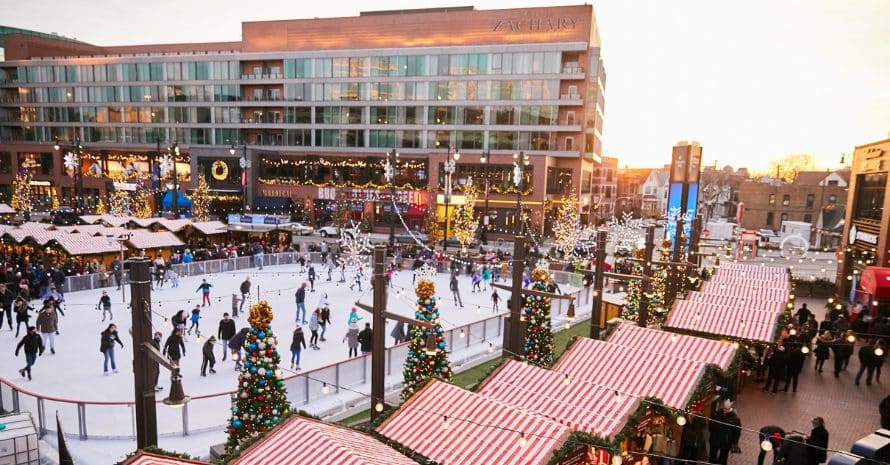 IT’S A WONDERFUL LIFE: Winterland outgrew its footprint next to Wrigley Field. The skating rink and other attractions have moved inside the ballpark. (Courtesy Chicago Cubs)

Seven-figure investments in Chicago and Charlotte

The real estate group tied to the Chicago Cubs sees Gallagher Way, the plaza next to Wrigley Field, as a key piece of development that other teams can adapt to their markets in an urban setting.

The winter months in Chicago, far removed from baseball season, provide strong proof of concept for that space. At Wrigley, a strategic piece of plaza programming is Winterland at Gallagher Way, the annual holiday festival produced by Marquee Development, an offshoot of Hickory Street Capital, the real estate investment firm owned by the Ricketts family, owner of the Cubs.

This year, the Nov. 18-Jan. 8 festival expands into the stadium itself. The festival, a seven-figure investment, enters its fifth year with retail vendors and food and drink huts that make up Christkindlmarket. The popular holiday market, part of the festival since it started in 2017, is named for and modeled after the 16th-century event in Nuremburg, Germany.

The skating rink, a main attraction of Winterland, has become so popular that the event ran out of space on the 30,000-square-foot plaza, said Eric Nordness, Marquee Development’s managing principal. The solution was to move the rink inside Wrigley, which freed up roughly 30% additional square footage for the holiday market. Capacity is 5,000 to 7,000 people per day.

“Everything has been punched up with more content, more room to move around and the ability to host more guests,” Nordness said. “What we’ve built with the Winterland franchise attracts regional visitors with a ‘staycation’ mentality.”

In general, winter festivals at ballparks are driven by the need to generate revenue in the offseason and to serve the local community.

Other Major League Baseball teams such as the Los Angeles Dodgers and Texas Rangers have built temporary skating rinks as part of holiday programming at their ballparks. Over the past 12 years, the Cleveland Indians and San Diego Padres have also produced winterfests at their facilities.

The trend has trickled down to the minor league level in markets such as Oklahoma City and Las Vegas.

The Charlotte Knights, the Chicago White Sox triple-A affiliate, are in their third year of producing the “Light the Knights” festival. The event, running Nov. 23-Jan 6 at Truist Field, has expanded this year to include a regulation size hockey rink for public skating and a snow tubing slide to supplement holiday market stands on the concourse.

The Knights, whose owner Don Beaver owns Truist Field, launched their festival at the end of 2020 to generate some much-needed income after the minor league baseball season that year was canceled during the pandemic. The first event drew about 30,000 people. Last year, attendance doubled to about 60,000.

This year, the Knights expect 100,000 to 120,000 attendees as the event grows into a million-dollar production, said Dan Rajkowski, the team’s chief operating officer. Festival admission runs $10 to $100 a person depending on the package and activities included. The high-end price covers a season pass over the course of the festival.

“We do special events that don’t necessarily make us a ton of money, but it’s good for the area and this will be one of them,” Rajkowski said.

As part of the event, the team booked a pair of outdoor hockey games this week (Nov. 18-19) involving the Charlotte Rush, a junior league  team, and club teams representing UNC-Charlotte and Wake Forest. The Rush and UNCC reached out to the Knights to use the rink ahead of the festival, Rajkowski said. Capacity will be about 500, restricted to outfield seats. Tickets are $20.

In the future, there’s a possibility that the AHL Charlotte Checkers could play an outdoor game at Truist Field. For now, the Knights are going through a learning process operationally with the rink, Rajkowski said. 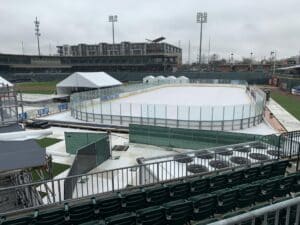 The festival itself has provided a boost for corporate holiday parties in premium spaces at Truist Field after that business disappeared during the pandemic. A few companies have booked the entire ballpark for their outings Monday through Wednesday over the next six weeks before the venue opens to the public Thursday through Sunday, Rajkowski said.

The event should also help steer foot traffic to the Knights’ team store to buy merchandise after the team recently underwent a rebrand with a new color scheme, showcasing a blue tint similar to the Carolina Panthers and Charlotte Hornets, the city’s NFL and NBA clubs.

Rajkowski got the idea for winterfest after seeing the Padres’ setup at Petco Park during the 2014 Winter Meetings in San Diego with the faux snow flying and lights twinkling in southern California.

In North Carolina, the Knights did a lot of research and studied historical weather patterns for how to maintain optimal conditions for the rink and the tubing slide. They’re confident the giant chillers set up in the outfield will keep the ice intact and the surfaces slick for both structures.

It’s a little bit easier to keep the ice cold in the Midwest.

The Cubs first set up a skating rink outside Wrigley Field in late 2009, less than a year after the NHL Winter Classic hockey game took place at the ballpark on New Year’s Day and several years before Gallagher Way opened. This year, as part of Winterland, the rink is set up in right field. It spans 12,000 square feet, which is one-third larger than the plaza version.

In addition, a few carnival rides and midway games are part of this year’s wintry mix inside and outside the ballpark. The Lodge, a indoor food and drink hall set up in left field, is fronted by two fire pits.

As part of the festival, Marquee Development has taken premium hospitality to a higher level.

Six heated indoor chalets in center field are available for group rentals of 10 to 20 people at a cost of $60 to $150 a person, which covers admission, ride tickets, snacks and a hot chocolate bar. The deluxe package comes with beer and wine, souvenir mug, charcuterie board and a dedicated server. All chalets come with a fireplace.

Admission is free to the holiday market on the plaza. The fee is $5 to access the ballpark with an advance sales special of $30 for admission plus 10 ride tickets.

The event helps boost business at the Hotel Zachary and the bars and restaurants across the street from Wrigley Field, during the typical slow period in the offseason. The hotel, which opened in March 2018, and the food and drink destinations attached to it were developed by Hickory Street Capital.

“We see the ‘lift’ after we see the numbers from Christkindlmarket, compared with no events going on,” Nordness said. 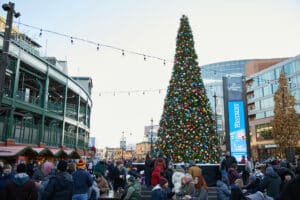 That’s the vision of every big league team as they pursue year-round assets connected to their venues.

Three years ago, Hickory Street Capital started a business to invest in entertainment districts outside of Chicago and Marquee Development was launched. The pandemic slowed things down, but after the two-year pause, Marquee is working on multiple deals outside of Chicago.

Its first project, which broke ground one year ago, is a $500 million development next to Target Field, home of the Minnesota Twins. Marquee Development partnered with Hines, another developer, to build North Loop Green, which consists of two residential towers, a hotel and office space. The Twins are not an investor in the project.

North Loop Green blueprints contain a plaza that could include a winterfest in downtown Minneapolis, Nordness said, given that its sister city St. Paul is the site of the oldest winter carnival in the country.

“For us, what’s going on at Gallagher Way is working,” he said. “We’re doubling down on those efforts. It’s still family focused, with events to complement music, food and sports. That’s the core trifecta.”

EDITOR’S NOTE: This story has been corrected.