XFL Ramps Up For February Kickoff 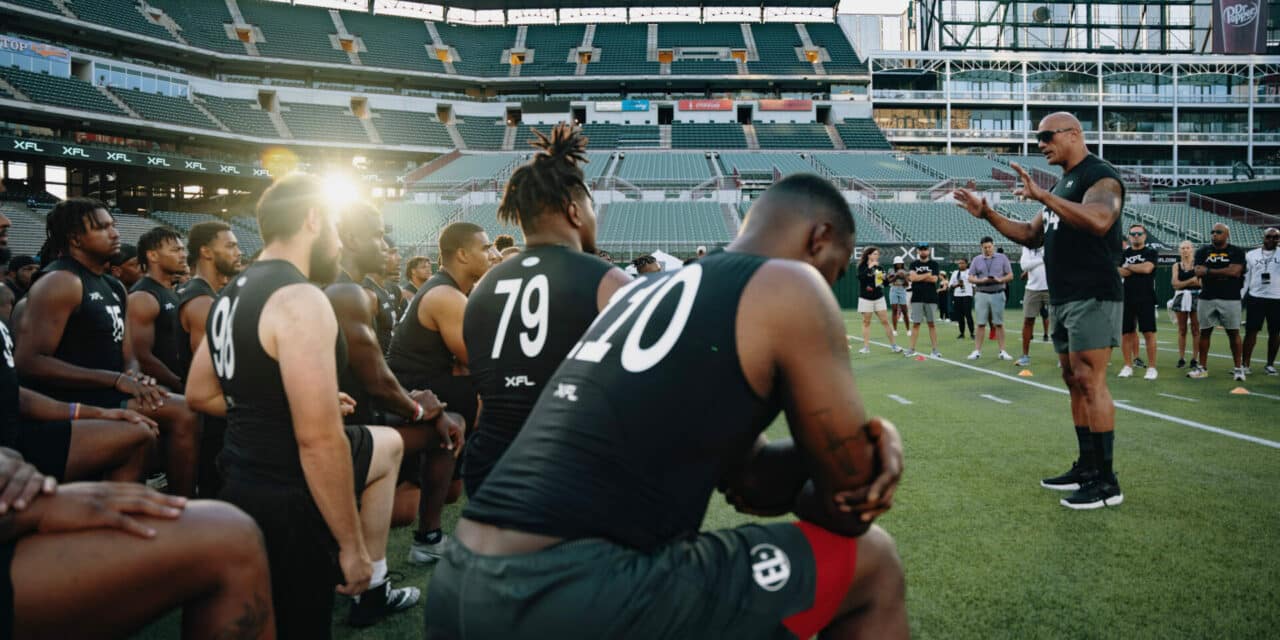 CAN YOU SMELL WHAT HE’S COOKING?: Team co-owner Dwayne “The Rock” Johnson addresses hopeful XFL players at Choctaw Stadium in Arlington, Texas, which is the hub for the league personnel and players. (Courtesy XFL)

As the NFL preseason ramps up, the XFL is in full throttle for the start of its season in six  months with a new ticketing partnership and three new teams at stadiums in San Antonio, Las Vegas and Orlando.

The XFL and Ticketmaster announced a multiyear ticketing partnership on Aug. 2 including all 43 games of the XFL season including 40 regular season games, two playoffs and the championship.

Fans can use their mobile device to manage verified tickets via a download to a digital wallet or the XFL mobile app powered by Ticketmaster, which will be available later this year. Additionally, fans can use “virtual venue” technology with 3D stadium views to make informed seat selections.

Technology, innovation and accessibility is central to the league’s stated culture of connecting players, fans, partners and communities.

Dwayne Johnson, Dany Garcia and RedBird Capital Partners purchased the league for $15 million in 2020, after the league filed for Chapter 11 bankruptcy protection in the middle of the 2020 season.

The current format is the XFL’s third attempt to establish a foothold among the wreckage of  multiple spring pro football leagues that have come and gone over the past 40 years.

In 2001, Vince McMahon, chairman and CEO of World Wrestling Entertainment, and Dick Ebersol, chair of NBC sports, started the short-lived renegade league, which eschewed many of the NFL’s rules and safety protocols. McMahon brought a reboot of the league back in 2020 but after the COVID-shutdown, the league collapsed in the pocket(book).

Eight XFL teams share a hub in Arlington, Texas with participating teams flying out for scheduled games that kick off on Feb. 18, 2023. Existing teams from 2020 are Houston, Seattle, St. Louis, Washington, D.C. and Arlington. Teams that didn’t make the cut were Los Angeles, New York and Tampa, Florida.

Players, team names and mascots have yet to be announced, but the coaching staffs have been released with a mix of former NFL and college coaches and retired players. The XFL announced that ESPN will broadcast games through 2027.

The 63,000 capacity Camping World Stadium is owned and operated by the city of Orlando and positioned to take full advantage of the XFL opportunity.

According to Chief Venues Officer Allen Johnson, city officials were interested in hosting a team for several years, even after Tampa was ultimately selected for the failed 2020 XFL incarnation.

“But now it’s exciting that they came to us,” Johnson said. “We’re enthusiastic about the new ownership and their investment into this product as well as he relationship they have with ESPN and ABC.”

The city of Orlando has a memorandum of understanding with the XFL and contract details are still being finalized, but could include sharing in ancillary revenue streams including food, beverage and parking, Johnson said.

Fielding a high-profile football franchise in a metropolitan area of 2.3 million people with another 70-plus million annual visitors has its advantages.

“They are not competing against another professional football team in this market, outdoor especially, so that means they can really be the only product in the market,” Johnson said. “Of course, you have the Orlando Magic (NBA) and Orlando City Soccer (MLS) but the time they are playing is also really attractive.”

The 10-game regular XFL season follows bowl games and the Super Bowl, but still falls during a peak tourism window.

Originally built in 1936 as a President Franklin D. Roosevelt Works Progress Administration (WPA) project for $115,000, the stadium underwent a massive reconstruction in 2014.

“We invested almost $300 million into Camping World Stadium to make it a first-class venue,” Johnson said. “We often say it’s the best non-NFL stadium in the country. Others may argue but we feel pretty strongly about it.”

The stadium hosts a number of concerts as well as high school and college football games and international soccer.

“Activity in the stadium is really important to us because we really don’t have a home team that plays there,” Johnson said. “Every game we handle are visiting teams and bowl games. So that is the exciting part for us.”

The XFL is not the first football league to call the stadium home.

The stadium has also served as host for NFL preseason games for the Tampa Bay Buccaneers and the New York Jets and regular season college games. Presently, the stadium serves as host to the MEAC/SWAC Challenge presented by Disney, the Florida Blue Florida Classic, the AutoNation Cure Bowl, The Cheez-It Bowl and the Citrus Bowl.

“Anyone that has a stadium that doesn’t have a primary home team is always anxious to have a product in their venue,” Johnson concluded. “And it’s exciting for us to be part of the reboot of the XFL.”