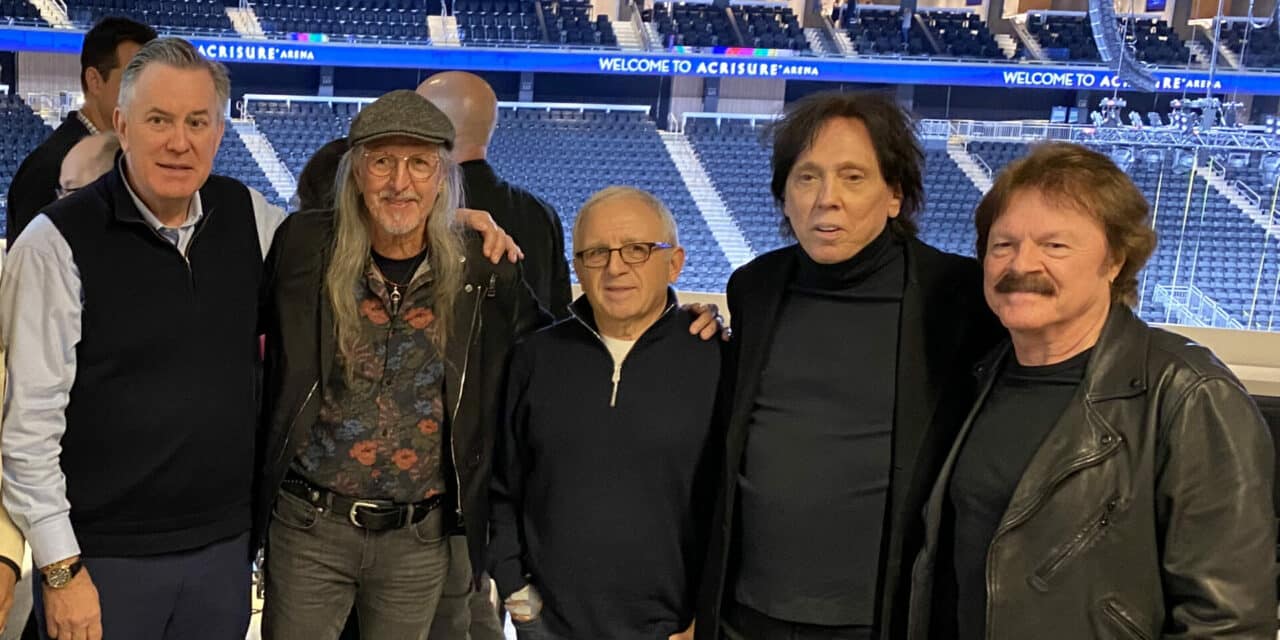 Earlier in the day, members of The Doobie Brothers, the first musical act to play the $300 million, facility tonight (Dec. 15),  joined Oak View Group CEO Tim Leiweke, Co-Founder Irving Azoff and John Bolton, the building’s general manager, plus a host of dignitaries for an official ribbon-cutting ceremony that included a Native American blessing.

The arena was privately funded by OVG, Live Nation and the NHL Seattle Kraken, the Firebirds’ parent team.

Capacity runs about 11,000 for concerts and 10,000 for hockey in a building expected to book major tours in a desert resort market that’s a two-hour drive southeast of Los Angeles. The arena features touches of indoor/outdoor aspects common among Southern California venues, but with elements that speak to the desert climate.

Leiweke joked that cost overruns resulted in a vintage aircraft flyover by planes from the Palm Springs Air Museum, instead of the jets that were originally ordered to soar over the building as the Indio High School ‘s Pride of the Desert Marching Band played the Star Spangled Banner.

Acrisure Arena is the sixth venue opened by Oak View Group over the past 12 months, two of them management deals. “I promise, no more arenas this year,” Leiweke quipped.

Azoff and Leiweke have vacation homes in the Palm Springs area.

““For Tim and me, this just isn’t just another building because we’re proud residents of Coachella Valley, and this wouldn’t have happened had we not experienced life here,” Azoff said.

The region “deserved to have a building,” he said. “It’s exciting for us as locals to be able to do this. We’re ready to go. Now the fun begins.”

The opening show started late as the crowd seemed to take its time filling the seats, some showing up well after the opening acts, Rick Ingraham and Donnell Rawlings, took the stage in the round.

Traffic flow inside the arena was smooth, although the requirement to put cell phones into locked Yondr pouches upon entry caused some delays.

Bolton explained during a tour last month that everything’s in the lower bowl in terms of seating.

“You enter at ground level then go down to the seats, he said. “The only thing upstairs are 770 club seats and 20 suites.”

Construction crews dug 25 feet below the surface to where the main ice sheet sits. The practice rink also sits below grade about 12.5 feet, giving both ice sheets the advantage of cooler temperatures than at the surface in the desert, where temperatures can reach 120 degrees.

“We didn’t want to obstruct any mountain views,” Bolton said. “That was the purpose of digging down instead of going up.”

The building is no more than 60 feet above grade at its highest point, as opposed to 100 feet at a typical arena. “The design complements the natural environment,” Bolton said of the building’s low profile, which creates less wind resistance.

There are elevators, but no escalators, to reach the premium level upstairs, which is just 15 feet above the main concourse, said lead designer Robert Norvell, principal and senior architect at Populous, who also appeared at the ribbon cutting. The premium level serves fewer than 2,000 patrons, Norvell said.

One distinction in the seating bowl: there is no center-hung videoboard, which is a trend among new midsize arenas. OVG instead opted for a Daktronics flat screen installed in the west end and a ribbon board that rings the lower bowl.

“It makes it easier for the show rigging,” Bolton said. “For us, it was about being able to hang 400,000 pounds from the roof and not have interference with a center-hung. For people, when you look at a scoreboard, you’re seeing about a third of it, depending on where you are, and you’re always looking up. Here, you really get better quality than what you’d see in a traditional scoreboard, three times the amount of viewing.”

There’s an outdoor artist and crew compound on the west side adjacent to the green rooms, plus a catering kitchen and dining area, that extends to lounge seating, shade/shelter, a firepit, bocce ball and a 9-hole putt-putt course, all with a view of the San Bernardino and San Jacinto mountain ranges.

“We think it sets us apart from other arenas nationwide,” Bolton said of the compound, with plans to open it in the first quarter of 2023. “We’re trying to take advantage of the beautiful landscape that’s all around us and, for most of the year, pretty nice weather, though not in August.”

The main entrance on the east side is designed to protect guests from the funneled desert winds, Norvell said. A canopied outdoor concessions plaza within the ticketed space is populated by five vendors serving from food “pods.” The exterior space appeared to be popular with guests and the pods never had long lines.

“That’s unique, for a hockey venue to have an exterior concourse to take advantage of the climate here,” Norvell said.

OVG Hospitality runs the food and speed of service wasn’t the case at some fixed concession stands inside the arena. The nachos stand had a line all night and lines formed outside markets and at beer stands, but carts serving chilled tall boys ($14 and $16) were sprinkled around the concourse with virtually no lines.

Bottled water cost $6 and drinking fountains were not easily found.

Staffing was ample, though some of the 1,500 event workers were hard pressed to answer wayfinding questions, which was forgivable on opening night. 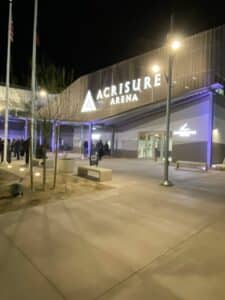 The Berger Foundation Iceplex, the Firebirds’ practice facility, is attached to the arena. It’s named for the local H.N. and Frances C. Berger Foundation. It will be open year-round for community skating, leagues and lessons and on Wednesday featured a figure skating demonstration by Olympic champion Dorothy Hamill.

Firebirds’ merchandise is flying off the shelves of a team store among the posh shops along El Paseo in Palm Desert, where a model of Acrisure Arena is showcased, Bolton said.

The Palm Springs region has a large contingent of snowbirds and transplants from Canada and northern U.S. states where hockey is popular, and Bolton expects that to weigh heavily in the Firebirds’ favor. The team’s home debut is Dec. 18. The Firebirds have gone 12-5-1 in aways games to start the season.

Palm Springs International Airport, 12 miles southeast of the arena, has six daily non-stop flights to Seattle with sponsor Alaska Airlines and serves other key feeder markets such as Portland, Oregon, San Francisco and San Jose, California, with connections to scores of other locations. 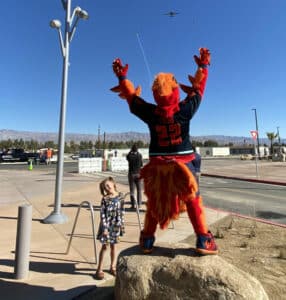 “Seattle is one of our top fly-in markets,” Bolton said. “A lot of people have second homes here and the Canadian influence here, I can’t underestimate how big that is, and they’re all huge hockey fans.”

Electrical lines and other infrastructure lie beneath a surface parking lot that can accommodate 3,000 vehicles, with solar arrays that should generate enough electricity to power the arena on non-event days, Ransford said. Parking was ample and easily accessed on opening night.

The arena sits on a 400-acre parcel as part of a future mixed-use development of retail, office, a hotel and residential units, Bolton said. The site is adjacent to the Classic Club, home of the PGA Tour’s American Express Desert Classic golf tournament, formerly the Bob Hope Desert Classic.

“Hopefully I’ll look out there one day and there will be a nice, huge hotel,” Bolton said.

The arena is two miles from the San Andreas Fault, which required additional engineering for earthquake resistance. It also requires an exit plan and signage, plus training staff to handle a potential seismic event, Norvell said.

The arena was originally contemplated for downtown Palm Springs, right off the main strip, and it ended up 15 miles closer to the fault, increasing potential seismic forces by 20% to 50% compared to the original site, Norvell said.

In addition, the site is part of a 100-year flood plain, which required a plan to divert water from the golf course, he said.

“COVID hit, things happened, and we moved sites,” Norvell said. “Luckily, we found a good partner in the Berger association. They had this site ready to go. There was a 2006 environmental impact study done on this piece of land. They had done some rough grading, so it wasn’t technically a green field. The environmental study went quicker.”

The 18-month timeline from groundbreaking to grand opening came during the pandemic, which Bolton attributes to being 100% design ready. CAA Icon is the owner’s representative on the project while AECOM Hunt is the general contractor.

“As COVID was shutting things down, it was full speed ahead,” he said.

Norvell said the client’s marching orders called for “a flagship music venue for the Coachella Valley” that would also be optimal for AHL hockey.

“Coachella Valley has such a historic music presence without having a venue that matched its history,” he said. “One of the thoughts from OVG was that this could be the starting place for big acts to get their show figured out before doing West Coast tours and hitting bigger markets. It was a music-first outlook for the arena, while also creating a state-of-the-art AHL facility.”

Arena bars are situated across the west end of the bowl. Milagro Tequila sponsors one bar, Garrison Brothers Bourbon the other. Founding partner Buzzbox is the arena’s exclusive ready-to-drink beverage supplier. Both bars have views to the event floor and were busy but not overcrowded.

All 770 club seats and all but two of the 20 suites have been sold. Most club seats are situated in the East and West Lofts and have access to outdoor patios. The Chairman’s Club, with room for about 250, is situated off the concourse. Two Founders Lounges are in addition to the 20 suites, which each fit 20.

“It’s like owning a suite without owning one,” Ransford said. “You can buy two individual seats for the lounge, and it comes with the bar and the food. It’s like a club suite.”

“The numbers that we’re pulling for crews is astounding,” he said.

“We did nine job fairs, one in each city throughout the Valley,” added Bolton. “We needed to hire over 1,000 people. We had a huge response and all of our positions and most of our third-party vendors are fully staffed. There are a lot of retired people and this is a cool part-time opportunity, especially for the ones who love hockey and music.”

(EDITOR’S NOTE: this story has been updated.)