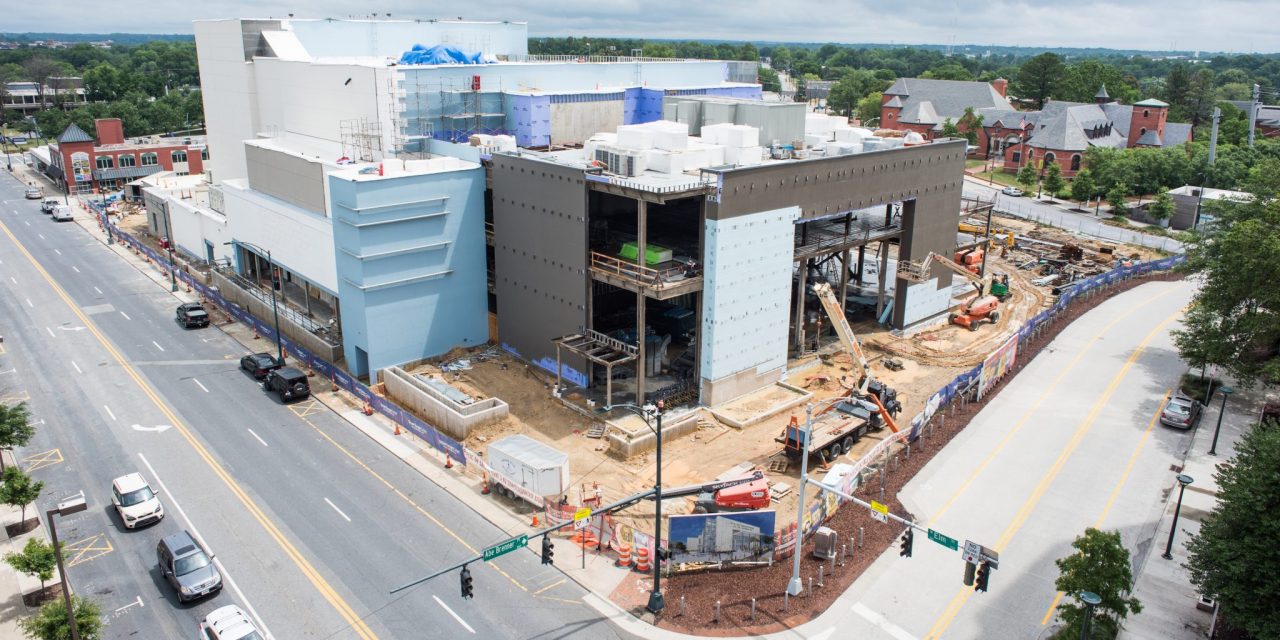 The $85 million Steven Tanger Center for the Performing Arts is under construction in Greensboro, N.C. (Courtesy Greensboro Coliseum Complex)

Rosser International, a longtime Atlanta architecture firm that helped design three stadiums in the city plus Infinite Energy Arena in suburban Gwinnett County, has closed its business, according to multiple sources.

Fred Krenson, who as a senior vice president was among the top executives at Rosser before retiring in 2017 after 38 years at the firm, confirmed the information. Krenson said he was recently in contact with Rosser officials who told him the company would cease operations.

“It’s true and it’s sad,” said David Southerland, executive director of the American Institute of Architects’ Atlanta chapter, whose lifetime achievement award is named for Bernard “Rocky” Rothschild, founder of Alexander and Rothschild, which evolved into Rosser International. “Their biggest challenge was they didn’t have enough people bringing in new business. You finish second or third on projects and it adds up.”

The closing happened about two weeks ago after Rosser officials tried to sell the company but couldn’t get a deal done, sources said.

As of Tuesday morning, the Rosser.com website was still functioning, although telephone numbers in the Atlanta, Lexington and San Antonio offices failed to go through or were disconnected. Messages left with Chuck Hanning, director of Rosser’s office in Savannah, Ga., were not returned. Internationally, the phone line to Rosser’s office in Cairo was disconnected. In Doha, Qatar, nobody answered the phone in the early evening local time.

“Stuff happened that got out of control and they couldn’t get it back,” Krenson said. “There was some debt going on and it got upside down with various and sundry things.”

The privately held company had 80 employees working across multiple locations, including the overseas offices, according to the Rosser International website.

The closure comes at a time when other sports architects are flush with work, especially firms in Kansas City.

Populous, for example, now has 325 employees and has maximized its workspace since taking over the old Kansas City Board of Trade building in 2014. Generator Studio, a smaller Kansas City sports designer, will move into a bigger building by September as it expands staff, said Mike Kress, founding partner and chief architect.

“The industry is going gangbusters but (Rosser) hasn’t been doing well for years,” Southerland said.

Greensboro, N.C., was the exception, where Rosser was involved in several projects over the past 26 years. Most recently, Rosser teamed with H3 Hardy Collaboration Architecture of New York to design the $85 million Steven Tanger Center for the Performing Arts in Greensboro. The 3,000-seat downtown theater opens in March.

Rosser designed all renovations to Greensboro Coliseum since 1993 and created the original design concept for the Greensboro Aquatic Center, which opened in 2011. It becomes the largest facility of its kind when a fourth competition swimming pool opens in late August, said Matt Brown, managing director of the coliseum complex.

In the future, Greensboro Coliseum officials will most likely turn to Walter Robbs, a Winston-Salem, N.C., architect that has already done some work for the complex on additional projects, Brown said.

Apart from sports facilities, Rosser was involved in restoring historic venues such as the Fox Theatre in Atlanta and Boardwalk Hall in Atlantic City, N.J. The firm also designed museums, libraries, prisons and courthouses, among other civic buildings.

Rosser’s origins date to 1947, when the firm started in Atlanta as W.L. Edwards Consulting Engineers, according to the website. In 1963, W.L. Edwards became Edwards & Rosser before merging with White Hobbs McClellan in 1974. Another merger followed with Finch Alexander Barnes Rothschild and Paschal in 1984. Nine years later, in 1993, the firm was renamed Rosser International.

In Greater Atlanta, Rosser teamed with Tvsdesign to develop the Gateway Center at College Park, a $42 million expansion to the Georgia International Convention Center that includes a 5,000-capacity arena. The arena will open this fall as the home of the College Park Skyhawks, the Atlanta Hawks’ new G League team. It seats 3,500 for basketball.

Over the years, Rosser International stood out for its work designing Atlanta-Fulton County Stadium, a multisport facility where the Atlanta Braves played baseball for 30 years before moving to Turner Field for the 1997 season. Rosser played a role in designing a retrofit for that building, which opened as Centennial Olympic Stadium for the 1996 Summer Olympics before it was converted for Major League Baseball. Krenson worked on the conversion and was part of the design team for the Georgia Dome, which was torn down in November 2017 after Mercedes-Benz Stadium opened next door.

“There’s a long history there and I worked on a lot of them,” Krenson said.

The joint venture of Apostolou/Rosser designed the University of Pittsburgh’s Petersen Events Center, which opened in 2002. The 12,508-seat facility features five event-level suites facing the court along one sideline, a feature unique to college basketball arenas.