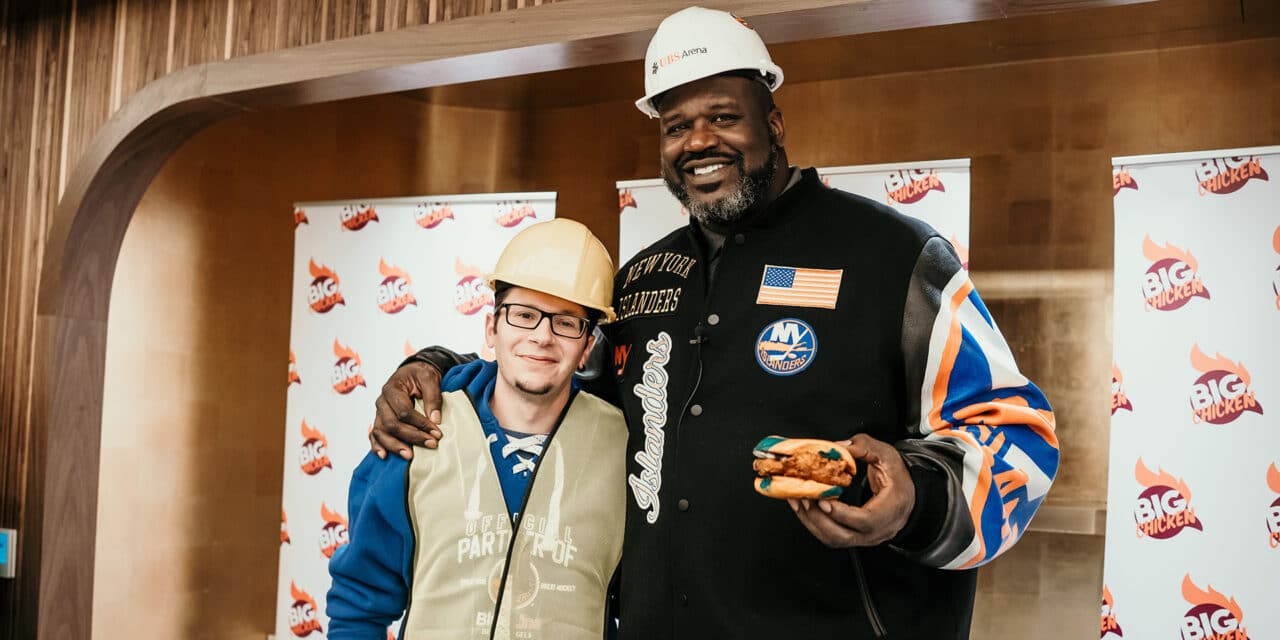 New Yorkers should feel right at home amid the food and beverage offerings at UBS Arena.

Concessionaire Delaware North Sportservice has partnered with several Big Apple-area brands and plans to showcase traditions such as a “Sunday gravy” package with sausage,  meatballs and braciole.

Local eateries featured at the NHL venue include The Harrison, with three arena outlets offering cheeseburgers and fries. The Floral Park firm is also Sportservice’s partner at Belmont Hall, the arena’s 700-seat restaurant.

Other local brands with an arena presence are Mighty Quinn’s Barbeque; Milk Bar, a bakery and dessert concept featuring signature Cereal Milk soft serve; Blue Line Deli & Bagels, whose iconic blue and orange bagels and sandwiches will be served at the arena’s marketplace locations; and Brooklyn-born Sausage King of New York, whose products will be available in concessions and premium spaces.

Local sourcing is prioritized with 75% of ingredients coming from within a 300-mile radius of the arena, depending on seasonal availability, according to Sportservice officials.

“When we talk about bringing a premium experience to the concessions environment, this is the arena we’re going to be doing that in,” said Anthony Kleinman, Sportservice’s assistant general manager at UBS Arena.

Kosher, vegan and gluten-free foods are also part of the mix.

Portable carts will carry popcorn and nachos, sushi and barbeque, plus Vide canned cocktails and Ilegal Mezcal craft cocktails. Beer and other canned beverages will be available at grab-and-go locations.

Two Amazon-powered Just Walk Out markets will also be added to the mix at or soon after opening, Kleinman said.

“With 13 marketplaces, you’re getting great premium culinary food served hot in front of you as you walk into a stand and it’s all on your own,” Kleinman said. “Instead of standing in line waiting for their food, (guests) have an open-air environment where you’re going to be able to walk in and enjoy the freedom of picking what you want, looking at the food being cooked in front of you, understanding what the food is and then being able to check out and go.”

“We’re going to have many locations where mobile ordering is going to be integrated and you can order right there and walk up and be able to just grab your food and go back to your seat,” he said.

Belmont Hall will be open to the public on event days, said Ted Donnelly, Sportservice executive chef at UBS Arena.

“It’s going to be that beer hall feeling with high-top tables and picnic benches where people can come and order as they please from servers walking around with handhelds,” Donnelly said.

“What we’re doing across the entire arena is simple food done really well, with maybe a little twist on it,” he said. “When we’re making a sausage sandwich it’s not just a link sausage on a bun. It’s shaved sausage where we’re bringing it back to life on a flat-top grill so it gets a little more crisp and it sits nicer up on a bun. Our tacos are traditional street-style.”

Sportservice’s operation extends to the arena’s 56 suites and five clubs.

“With our Sunday gravy in the suites, we’ve got braciola (various meats rolled in cheese and bread crumbs and fried), meatballs and sausage, all in a traditional red pasta sauce served with pasta,” Donnelly said.  “Our inclination is to serve simple foods done right.”

Kleinman said it’s been a big plus for Sportservice to be involved from the design phase of arena development. The vendor sent people to Kansas City, home of arena architect Populous, to offer input on the “overall flow of the kitchen spaces, overall look and feel of the concession stands and how we wanted to design the equipment into them.”

“Time was taken to do it right and put every piece of equipment in the right spot and design for the right flow so we can execute the mission without causing too much commotion,” he said.

The arena’s 13 bars will have cocktails on tap and frozen drinks, with opportunities to showcase local and national brands such as Notorious Pink wines, Heineken, Ilegal Mezcal and Patron.

“We’ll have some fun cocktail ideas in our premium spaces and on the concourse as well,” Kleinman said. “Heineken is our big sponsor so that gives us an opportunity to really showcase some of their brands. We’re very excited about that piece.”

New York is a food mecca, which means the bar is set high, and at UBS Arena, the quality of offerings will trump quantity, Donnelly said.

“Be brilliant at a few things and people will respect you for it,” he said. “Anthony and some of the team members had the opportunity to go out to Climate Pledge Arena to see their opening weekend and there are things we took away, some things they did that went really well.”

“Some of the technological aspects are similar and we’re trying to stay ahead of the game with crunch points and other aspects of the operation,” Donnelly said. “There’s always more to learn and it’s going to be a fun first few months nailing down the operation and getting it into lockstep.”

Staffing has been a challenge, but the excitement of opening a new arena has played in Sportservice’s favor. The company has made good use of online resources like LinkedIn, Indeed.com and other sites in its recruitment efforts, Kleinman said.

“You know what’s been working best? Word of mouth,” he said. “We’ve gotten people on board and now we are seeing some of their friends come down. It’s definitely starting to turn around.”