UBS Arena: Welcome to the Club 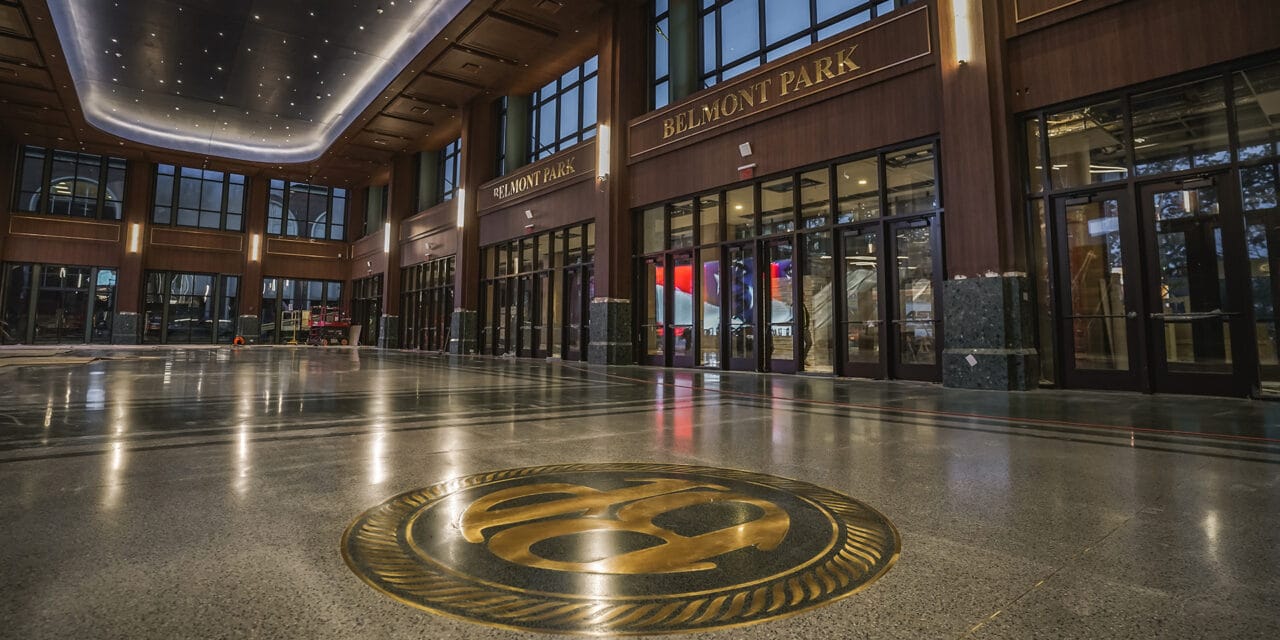 GRAND INDEED: The grand lobby is the big entrance to big events that are coming to UBS Arena. (Courtesy team)

The New York Islanders finally have a new home, and if the premium areas impress you, wait till you see everything else

New York Islanders fans have waited for what seems like an eternity for a first-class hockey barn to match their passion for a team that got lost in the NHL’s top market over its tenuous home ice situation.

The Blue and Orange Army finally get what they deserve with UBS Arena.

All of those proposed arena developments over the past 30 years, including the ambitious but ill-fated Lighthouse Point mixed-use project as part of revitalizing Nassau Coliseum, are a distant memory now.

The new $1.5 billion red brick fortress that sits next to historic Belmont Park fits the needs of the Isles’ most fervent supporters and those new to the sport out for a night of entertainment.

The arena’s swanky bunker suites and clubs are exclusive and impressive, but it’s the basic amenities in public spaces that speak to puckheads. For those that packed the no-frills coliseum during the Isles’ glory years winning four consecutive Stanley Cups in the 1980s and put up with a poor fan experience after the team switched home games to Barclays Center, an NBA arena shoehorned for the NHL —- this beer’s for you.

There are plenty of watering holes to make that celebratory toast. UBS Arena has eight bars accessible to all fans with open views to the ice.

It starts with the large Heineken Red Star Bar, which sits at center ice on the east side of the main concourse. It’s 42 feet long and 20 feet wide, one of four bars branded for the team’s beer partner. All arena patrons will pass by that destination themed with Heineken’s familiar green color scheme as they walk up the stairs from the grand lobby.

Supporting those bars are the multitude of drink rails dispersed pretty much everywhere on the concourses for fans to perch their adult beverages and hang out during intermission when those hallways get crowded.

“There are lots of drink rails; it’s an underrated thing,” said Mike Sciortino, UBS Arena’s senior vice president of operations and assistant general manager. “At other arenas, you buy food and drink and there’s nowhere to put it. We have them wherever possible.”

The big welcome starts with the spacious grand lobby at the northeast corner, spanning 11,000 square feet and topped by a starry sky ceiling design. From that vantage point, patrons can look up and see a good cross-section of the arena, from the main concourse up to the suite level.

To recognize its neighbor Belmont Park, the 116-year-old horse racing facility next door, there’s an emblem of a BP medallion embedded in the floor of the grand lobby and on several locations of the facade.

The half-dozen lanterns adorning the exterior corners harken back to the original Madison Square Garden, which was built in 1874 and demolished in 1925.

In addition, the white tile wayfinding columns bring touches of Grand Central Station to the concourses.

All told, 96 varieties of tile are part of the building decor, including what are some of the nicest restrooms at a big league arena, said Hank Abate, president of arena operations.

“Fans will see a venue that acknowledges the history of the site and classic New York,” said Tom Pistore, UBS Arena’s president of commercial operations. “They’re going to feel the class of New York coming out in a nostalgic way and respectful to the parklike setting.”

The seating bowl respects the opinion of many that feel no sport matches the experience of watching hockey live. The lower bowl has 9,000-plus seats to keep the highest number of Isles fans as possible engaged in the action.

The upper bowl splits into two smaller sections, bringing everything closer to the ice. Standing at the back of the 200 and 300 levels, patrons are never more than a nine-row walk-up to their seats, Sciortino said.

Both concourses have large outdoor terraces that will be used as much as possible pending weather conditions, driven by the concert market at a building designed as much for live entertainment as hockey.

The Heineken Terrace, an 8,650-square-foot space in the upper deck, has roof cover and overlooks Paddock Park at the racetrack. During Belmont Park’s two seasonal meets in the spring and fall, fans can watch thoroughbreds trot on the green space below, Sciortino said.

At ground level on the southeast corner, the 7,300-square-foot Belmont Hall restaurant faces the track with an outdoor dining patio. Inside, the restaurant has a direct path to the suite lobby for premium seat holders.

The premium spaces take the Islanders VIP experience to a new level with 56 suites and six club seat offerings.

The most exclusive are the 18 Spotlight Suites at event level, the arena’s version of bunker suites. Those buyers have access to the first row of seats along the glass. The elevated riser supporting those seats are a difference maker.

At other NHL arenas, those “ice seats” are sunk below the dasher boards without providing a clear line of sight, said Peter Luukko, chairman of OVG Facilities. At UBS Arena, “it’s just an incredible seat,” Luukko said.

A few Spotlight Suites are designed with one-way window views of the Islanders walking on and off the ice.

The Spotlight Club itself, a 2,500-square-foot room that’s part of that mix at event level, is effectively a large version of the suite product, providing an opportunity to see both the Islanders and visiting teams pass by its windows. It’s situated at center ice. Capacity is 130.

Midlevel, the 37 Belmont Suites come with a permanent wet bar fronting the hospitality space, a twist on suite design to help keep patrons connected to the action on the ice. The same intent goes for the 12 fixed seats, pushed forward a bit further into the bowl than other traditional suite configurations, Sciortino said.

For all premium seats, terms are three, five, seven and 10 years. The average length is eight years, he said. 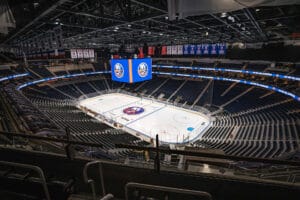 JUST ADD ICE: The NHL Islanders’ new home has a capacity of 17,000 for hockey. (Courtesy team)

A few weeks before the Islanders were set to play their first home game on Nov. 20, most inventory was sold except for a few hundred club seats. The Islanders feel they’re in good shape overall considering the competition.

“There’s not a more fierce market in pro sports than New York,” Pistore said. “We knew that coming in and had the benefit of being the last building to open, so while it’s a challenge it’s also a blessing. From the amenities we were able to build into our package, stuff that some arenas can’t offer in the market like parking, it’s helped us overcome any of those challenges.”

For the suites, it was almost exclusively new buyers making those purchases, Pistore said. Nassau Coliseum, before it was renovated four years ago, didn’t have much of a suite product. At Barclays Center, a tiny fraction of customers purchased suites for Islanders games.

All told, the Islanders essentially started from ground zero to sell suites with the majority of purchasers coming from Nassau and Suffolk County and the Long Island district. Pistore said it was a compelling draw for a community that has never had a venue of this quality.

“Given the affluence as well, they’ve responded,” he said. “The Manhattan customer is still involved but this is going to be the home of the Islanders and tapped into a Long Island base.”

An estimated 30% of previous Islanders season-ticket holders upgraded to club seats, happy that they finally get access to the amenities that weren’t available at Barclays Center and Nassau Coliseum, he said. Overall, there’s a broad base of premium options, some focused on hockey and others tailored more to the live music experience.

The Dime Club, with 11,000 square feet of hospitality space on the west side of the main concourse, is the largest of two sideline clubs. It’s named for the arena’s banking partner and is tied to four center sections of 1,300 seats.

One floor above on the suite level, the UBS Club, situated at the south end facing the stage, showcases the arena’s loge box concept sold in two-seat and four-seat packages. The setup for the 22 units is a mix of chairs and stools.

The 23,547-square-foot club is open to the seating bowl. The small television screen or tablet, a standard amenity with the loge product, has evolved at UBS Arena to a larger flatscreen at the rear of the box.

“A lot of this was long-standing fans that may have left the Islanders’ environment because those amenities weren’t there or up to par,” Pistore said. “They’ve seen the new venue now (at the preview center) and it shows them what was possible, all against the backdrop of the pandemic.”

The board is large but not overbearing, Sciortino said.

Early in the development, there were discussions over the dual videoboard concept, which took root at Climate Pledge Arena, home of the NHL expansion Seattle Kraken and another OVG project. In the end, the decision was made to go with a single board, Amundsen said.

One aspect of UBS Arena that does mirror Climate Pledge Arena are production spaces for touring shows.

Those areas extend from the eight loading docks and 52,000 square feet of marshaling space, to the four star dressing rooms and a dedicated kitchen to avoid having to prepare meals for crews in the loading dock.

The rigging grid has a total capacity of 400,000 pounds, which as it stands now, is more than twice the load for the live entertainment industry’s most extravagant productions.

All told, the back-of-house design provides for greater efficiency for setup and teardown of concerts resulting in promoters saving roughly 30% to 40% in production costs to book events at UBS Arena, Luukko said.

“We have the sports compound and artist compound, dedicated areas for the Islanders and for shows,” he said. “It’s all about the ability to be working with both areas and the two don’t meet. We’re not robbing Peter to pay Paul in terms of dressing rooms and catering.”

The arena is second to none for touring amenities for a venue with live music as a second tenant, Amundsen said.

“The only thing that limited us at all in Seattle was the existing roof structure,” he said. “This building will perform extremely well financially. Operationally, tours will love coming here, not only for the market, but for the ease of touring. It will be very attractive to a number of shows.”