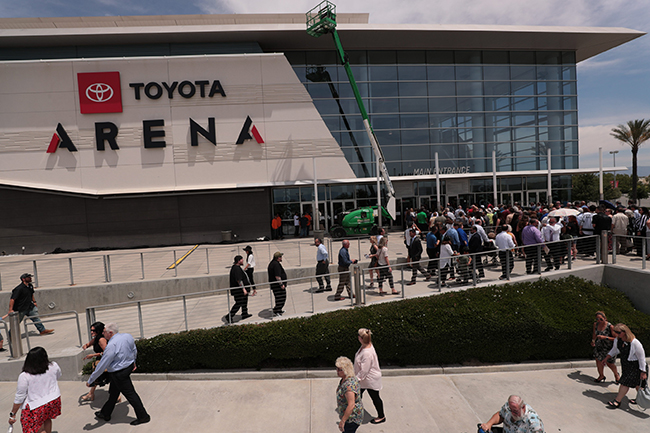 Toyota Arena replaces Citizens Business Bank Arena. (Courtesy Toyota Arena) Ontario, Calif., venue gets new naming sponsor in 10-year deal Citizens Business Bank Arena in Ontario, Calif., is becoming Toyota Arena starting Tuesday. Citizens Business Bank’s 10-year deal started when the facility opened in 2008. The new contract with Toyota is also a 10-year deal. Financial terms were not disclosed. In an uncommon move, the deal was sealed three weeks ago and the signage made and put up for the revealing of the new name. Adam Millar, general manager of the building for SMG, has been with the 11,500-capacity venue since August 2018. “It’s a wall-to-wall full naming-rights deal,” Millar said. “This is an expansion of a partnership and relationship that’s been in place for over 10 years. Toyota was one of our original sponsors.” This is not Toyota’s first naming-rights installation. The car manufacturer already has its brand on […]
To access this post, you must purchase Subscribe to VenuesNow – 1 Year, Subscribe to VenuesNow – 2 Years or Subscribe to VenuesNow – 3 Years. If you are already a member of VenuesNow, please login here: log in