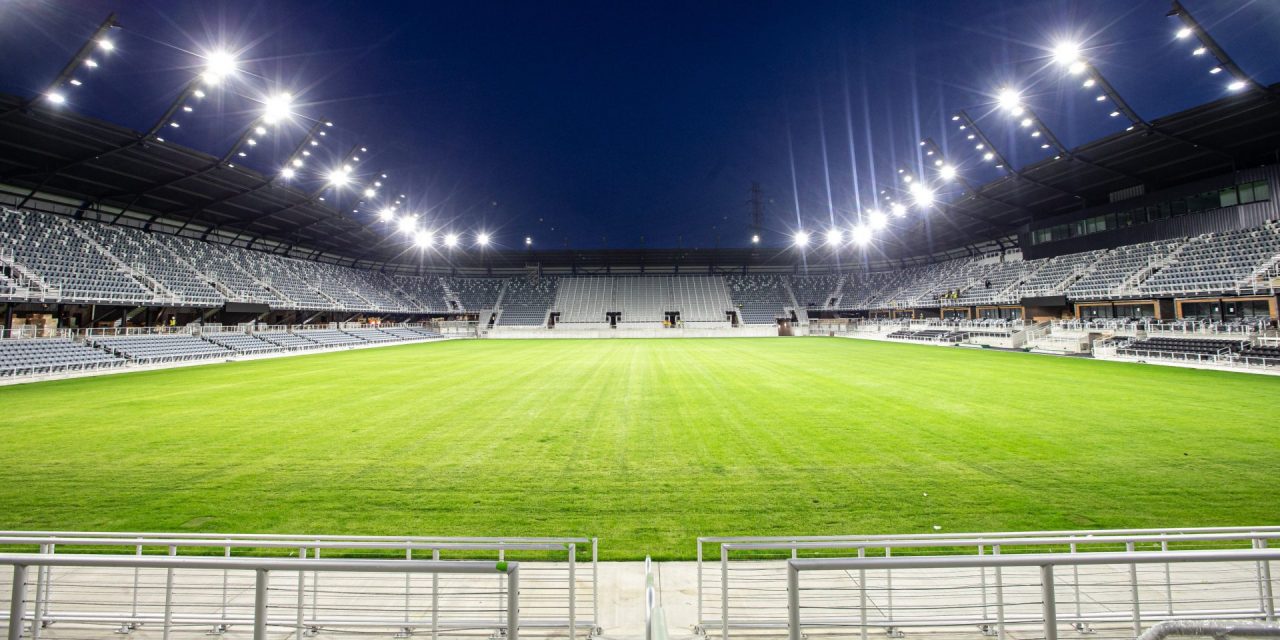 READY TO GO: Lynn Family Stadium is one of the new venues that postponed spring openings because of COVID-19. (Courtesy Louisville City FC)

The national shutdown of sports and entertainment venues put a damper on four stadiums poised to open this spring across the country.

Globe Life Field, the Texas Rangers’ new $1.2 billion palace, is the most prominent facility affected by the COVID-19 pandemic.

Keeping the doors closed after the outbreak has been a tough break for all four buildings and the principals involved in those developments. There are obvious concerns over the financial implications of losing revenue from events postponed and canceled because of the shutdown.

If there’s a silver lining in a situation clouded by uncertainty, teams now have ample time to complete the final “punch list” items at those new venues, such as installing wireless infrastructure and broadcast cabling, repositioning electrical outlets and testing security systems connected to surveillance cameras.

Those were all items on the Rangers’ list, along with testing the retractable-roof mechanisms, after MLB postponed the opening of the regular season, said Rob Matwick, the team’s executive vice president of ballpark operations.

In Arlington, all construction workers go through temperature checks before they enter the ballpark, Matwick said. Those whose temperature runs high are denied access to the site until they are cleared by medical professionals. (In late March, one worker tested positive for coronavirus).

The pandemic has the Rangers thinking of ways to further protect their fans after the stadium opens for business. Plans are still in the works for those safeguards, including on the food side with Delaware North Sportservice, the team’s longtime food and retail concessionaire.

On a smaller scale, it could potentially include free bottles of hand sanitizer distributed at the gates. Mike Healy, the Rangers’ senior vice president of venue operations and guest experience, has had those conversations with other MLB teams, and the team may consider putting the Globe Life Field brand on the small plastic containers, Matwick said.

“Masks and gloves may become more commonplace among our front-line staff engaging with customers as they enter the building,” he said. “We’re fortunate with our design. If we had to create additional space we could do it. Not all ballparks are that way. Most are in urban settings.”

“We’re waiting on confirmation from the league on when to restart play,” team spokesman Howie Lindsey said. “Whatever that first home date is will be our stadium opener. We’ve been working on a video and light show with pyrotechnics (that was) planned for April 11. We just have to wait a little longer.”

The $65 million stadium, designed by HOK, is situated just north of downtown Louisville in the Butchertown neighborhood. It has 9,600 fixed seats and can reach a total capacity of 15,000 with safe-standing sections and other standing-room spaces behind the two goals.The building’s 18 suites are sold out, priced at $40,000 to $95,000 annually.

The Lynn family, owner of Visionworks, a national chain of optical retail stores, bought the stadium’s naming rights in a 10-year deal. The family previously bought naming rights to the University of Louisville’s soccer venue.

The building’s signature design is the curved roof line with lighting spires, designed with the look and feel of a bourbon barrel. It’s a nod to the city’s bourbon heritage, according to Lindsey. The stadium itself is positioned to spur redevelopment in one of the city’s oldest neighborhoods.

ASM Global, which runs KFC Yum! Center, about one mile from Lynn Family Stadium, is managing the building, and Levy has the food contract.

“We believe we have the nicest stadium in the USL and one of the finest in North America,” Lindsey said. “We can’t wait for people to see it.” 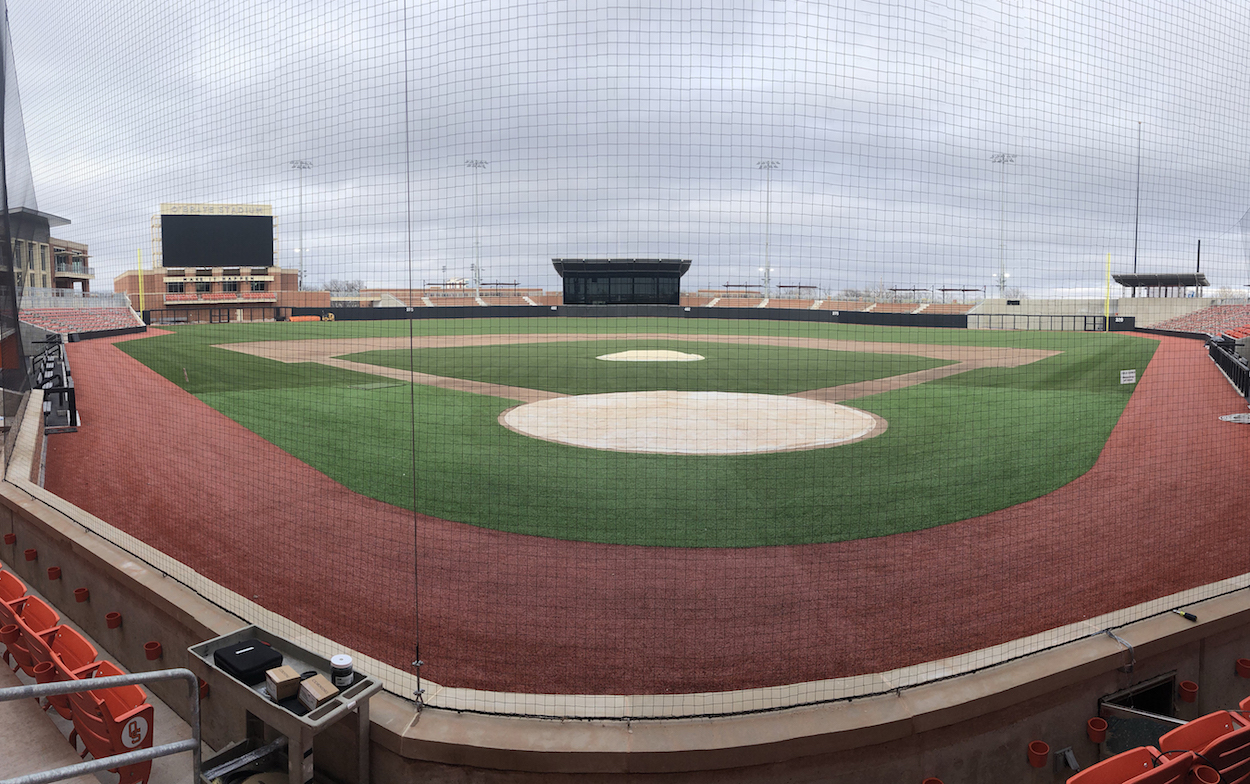 O’Brate Stadium, the new $60 million home of Oklahoma State University baseball in Stillwater, was set to open March 20 for the Cowboys’ game against TCU. President George W. Bush was scheduled to throw the ceremonial first pitch among the ribbon-cutting festivities.

The 5,000-capacity ballpark, designed by Oklahoma City-based Studio Architecture, is part of a 400,000-square-foot complex extending to a practice field, batting tunnels and strength and conditioning spaces.

“We plan to have a proper grand opening when a date makes sense,” Kyle Waters, the Big 12 school’s senior associate athletic director, wrote by email. “That could be this fall or (next) spring based on safety.”

In Wichita, a rebranded team comes with the $75 million ballpark, designed by DLR Group and built by J.E. Dunn and Eby Construction.

The 10,000-capacity venue is home to the Wichita Wind Surge, the Miami Marlins’ top farm team, which relocated from New Orleans. Riverfront Stadium was slated to open April 14 after an aggressive 14-month design/construction period. It sits along the Arkansas River, and similar to Lynn Family Stadium, it’s serving as an anchor for redeveloping a historic part of downtown Wichita.

Right now, it’s a case of sit and wait for the local community and Lou Schwechheimer, the team’s managing general partner. He’s working closely with MLB, Minor League Baseball and local government to determine the best time to start the regular season.

Schwechheimer is a baseball lifer and keeps things in perspective. He spent 37 years with the Boston Red Sox organization before putting together a group to buy the old New Orleans Baby Cakes and the Charlotte (Fla.) Stone Crabs, the Tampa Bay Rays’ Single-A Advanced team.

“Baseball, for the better part of a century and a half, has in so many instances helped lead America out of its darkest times,” Schwechheimer said. “Our hope is that once the tide turns and we get back to some sense of normalcy, we’ll provide a little bit of joy in people’s lives.”

Worth the wait: When Globe Life Field opens, it will show off more than the big Texas sky
Rangers keep old park in plans
Federal plan a first step toward opening venue doors