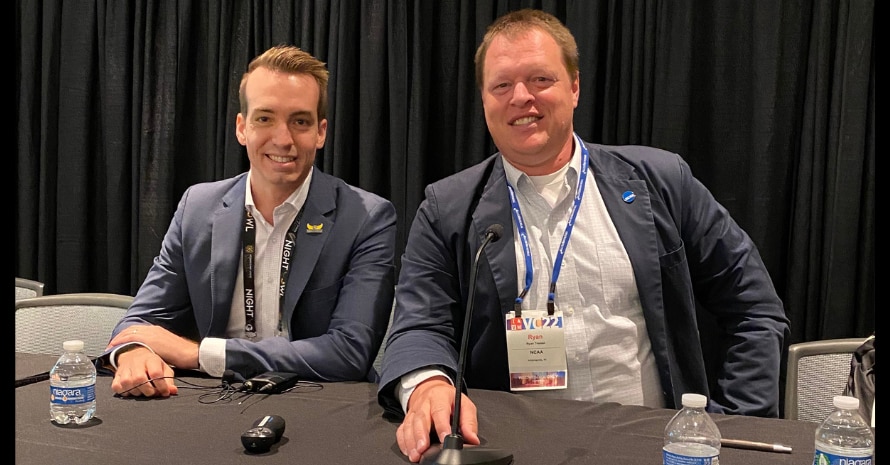 PHOENIX — The time is fast approaching to bid on some of the 90 sports championships the NCAA conducts across divisions I, II and III and there are things schools can do to increase their chances of being selected to host.

NCAA Director of Championships and Alliances Ryan Tressel laid it all out Wednesday at a session during the International Association of Venue Managers’ annual VenueConnect conference and trade show.

The first step is to go to the NCAA’s dedicated website: www.ncaa,.org/bids. That’s where detailed specifications can be found by sport, Tressel said at the start of the hour-long session, which was moderated by David Bennett, assistant general manager of Fifth Third Bank Stadium at Kennesaw State University and for the past two years chairman of IAVM’s University Committee.

“One of my main goals is to make sure everyone is aware of this process,” said Tressel, who has been with the NCAA for about 10 years and manages Division 1 soccer and lacrosse. He previously managed women’s DIII tennis, DII volleyball and bowling. “Too often we get survey results and hear from someone, ‘Oh, I had no idea.’”

As for the bid specs, Tressel said the NCAA site is a great one-stop shop. He noted, however, that the bid specs aren’t set in stone. Some exceptions are considered. For instance, if the specs say 50 media spots are required but a school can only provide 40, that isn’t necessarily a deal breaker, he said.

Each sport and level has its own committee, made up of representatives from colleges and universities that make the final selection decisions.

The cycle will begin earlier than in the past in response to member feedback, Tressel said.

In the last cycle, the NCAA received over 3,000 bids for about 85 slots, since some sports are not part of the bid process, he said.

“That seems like a lot. It was a lot,” Tressel said.

Specs are being updated for the upcoming cycle, but most won’t change and as it stands now, the website’s information is up to date, he said.

Another thing schools can take advantage of is a symposium on the subject that will be offered in Indianapolis, where the NCAA is headquartered. Attendance is not required to win a bid, but it’s informative and recommended for anyone new to the process.