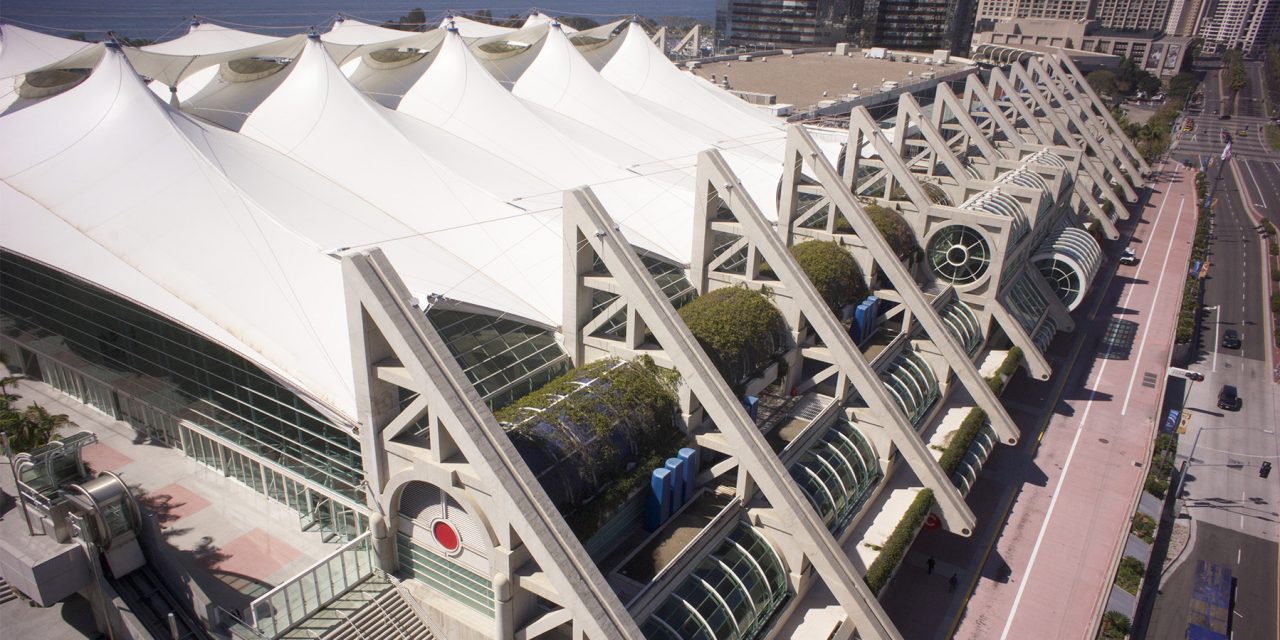 READY FOR DUTY: The San Diego Convention Center reached out to the city to find out how it could help. (Photos courtesy SDCC)

The San Diego Convention Center is one of many public assembly facilities across the globe that have gone from traditional functions as event venues and economic impact engines to serving communities in a variety of ways – from field hospitals to testing sites to food and supply depots — during the coronavirus pandemic.

With the convention center being pressed into service as a temporary shelter for its region’s homeless population, VenuesNow caught up with industry veteran Clifford “Rip” Rippetoe, president and CEO of the San Diego Convention Center Corp., to discuss how he and his staff are navigating the unprecedented calamity. The conversation has been edited for brevity. 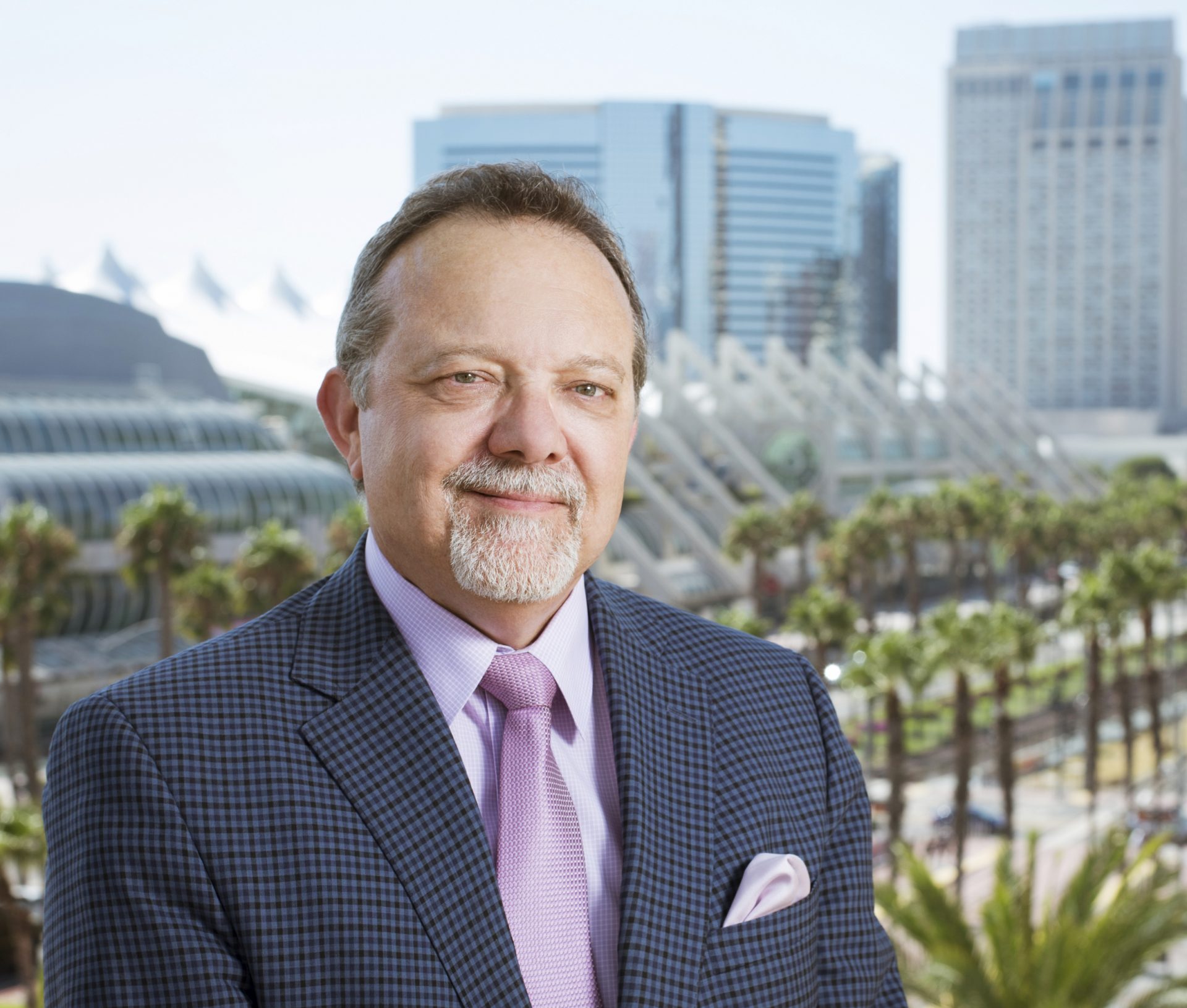 How did it come about that the convention center would be used to help house some of the city’s homeless during the crisis and how much time have you been given to prepare?
It came about because we are very connected to our community, number one. We are here to serve San Diego, all of San Diego, and we are a 501(3)(c) public benefit corporation (that) operates the convention center on the city’s behalf, and in the midst of that we have a contract administrator we stay closely connected to. We have a fairly large homeless population here … and we have always been very aware that the building is a community asset. So once we knew that we weren’t going to have a lot of business between now and mid-May then we … let the city know, “Hey, we have open space. We know you are looking at options. If we can help, please let us know and we would rather be in the conversation earlier than later.” So I received a phone call the beginning of last week saying, “We’re trying to find a way of taking care of our most vulnerable population,” and we said, “All right, if you are talking with us, please send people here, let’s do our due diligence.” So they did. The team from a combined city-county task force came in. We met throughout the afternoon on Saturday and again on Sunday with some of the electeds, walked the spaces, and we positioned ourselves as wanting to be able to welcome the opportunity to serve the community.

Was there any resistance from anyone, on the board or in government, to using the facility in this way?
No. No resistance at all. I would say that we all, from the very beginning of realizing that there was a need, wanted to be very solutions-based. Now that’s not to say that we are not doing our due diligence. We are, because we at the core are about creating economic benefit for San Diego through being a premier gathering place for conventions, trade shows and events.  Everyone wants to get back to that as quickly as we can, but given that that isn’t going to happen at least through April, then we can use this time and this space to benefit that really vulnerable population amongst us.

How many can be accommodated there and when will folks start moving in?
They have not determined an exact number at this time. Our teams are working through floor plans with this regional task force and community partners. We are going to initially start at one end of the building with three exhibit halls. They are currently working on the layout because there has got to be (six feet of) physical distancing that’s maintained. Even when they’re sleeping on cots, those cots have to be separated … so they’re working with not only our team on layouts but by law, whether it’s a shelter or not, it still has to run through the fire department, the fire marshals, for occupancy, design approval and layout. That part doesn’t go away because we’re shifting from hosting a convention to hosting a shelter, so all of that’s happening right now this week and we anticipate that they will begin mobilizing in the building the beginning of next week and then as soon as they’re ready they will be able to begin moving in the guests that will be using the building.

In what ways is the facility well-equipped to handle a task like this?
Every convention center — and I’ve remarked about this for years — what we do with our partners in-house is we build a small city for the most important week of an organization’s life, typically a week, for that year and then we tear it down and then help facilitate the building of it again and we do that over and over and over again, and so in effect we are experts in mass gathering. All of us … not just San Diego. Every convention center out there gathers people for defined purposes. That’s why we exist. … Now, given that it’s almost impossible right now for shows to occur, then it’s not insurmountable in my opinion to be able to shift that expertise over to a mass gathering of a different kind. So we’re taking everything we know and everything we’ve learned and are pivoting into a shelter operation. When the time is right we will pivot back to hosting shows and trade shows and events, (but) in terms of anyone in a community who has the knowledge and expertise to be able to assist in these really extraordinary times, the people who run venues have that expertise.

Is being prepared for crises part of the facility’s, or any facility’s, planning?
I would say yes, but not to this scale. This is something that none of us have ever faced. We train in venues constantly to address all kinds of situations from natural disasters … particularly in the Gulf states and the impacts that they go through (with hurricanes and floods) and then the relief that they provide, (but) even that is something that we’ve dealt with and have experience as professionals to know how to pivot quickly in those. This is something that none of us to my knowledge have ever dealt with. The impact at least in our section of the country is over the top from anything that ever has occurred from a natural disaster or 9/11 or any kind of economic downturn. This is extraordinary and I believe that — and I will say this from both a personal and a professional point of view — I’m just grateful that our team in San Diego and the teams all across the country in venues who put themselves out there to help their communities, I am just so grateful for our industry and the way that we mobilize to support efforts in our communities and our states and counties and for the country. No one is prepared for what we are going through at one level. At the same time, if anyone has the ability to be able to understand how to make such a significant change in operations, I would tell you to go and watch an arena (that) goes from lacrosse to ice hockey to a concert all in one week. They know how to pivot quickly, and all of us in the venue industry, in the venue world, as venue professionals we spend our entire career trying to come to a level of expertise where we can respond with professionalism and with confidence, that we can help and that we can serve our community. I hope that everyone out there at some point can see that in a way, because I believe that we have some of the most undersold heroes and “sheroes” out there across the world in our industry. Specific to us it’s the right thing to do to support our community, both from a moral and ethical standpoint. From a fiscal standpoint, we’ll get some costs probably reimbursed eventually and we’ll be able to keep people working and we’ll be able to stay ready. 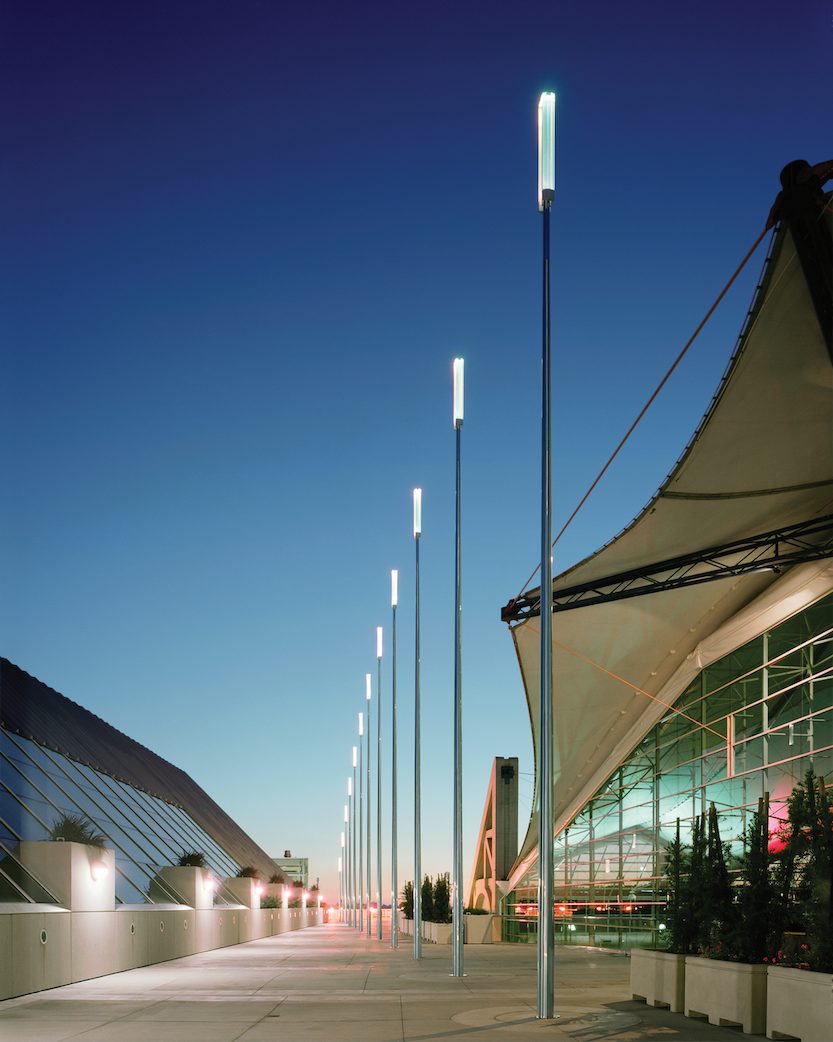 “There are a lot of venues all over the U.S. right now that have stepped up and have been called into service outside of what our traditional purpose is,” Rippetoe said.

Is it possible that the convention center will play an even greater role in the course of this crisis as it continues?
I would say that the possibility exists for us and everyone to be called into action at some level. I’m aware of several convention centers across the country and arenas and performing arts centers that are doing what we are doing. Some are more medically oriented than shelter. Some are testing facilities. In one case I’ve heard they are actually secure storage for medical supplies locally. More than a handful are functioning as food distribution outlets or centers. There are a lot of venues all over the U.S. right now that have stepped up and have been called into service outside of what our traditional purpose is. We probably will be approached for other purposes. Again, what we have to do is balance the need to be able to serve our community with the ability to pivot quickly to what we do best and what we are designed for … and that economic stimulus that we as an industry bring to a community is paramount as we get to a point where we’ve got to get populations back to work. In our case, we as a convention center through the shows that we host support lots of small businesses: attractions, restaurants, retail, hotel, lodging. So it’s not just our team that is being displaced because there aren’t any shows. What happens affects thousands of people in our community and there are destinations across the country that are seeing the same thing. The sooner we can get back to a healthy way of being able to host all of these kinds of events, it’s going to be a huge step forward for the economic benefit of our communities.

How do you and those working there square job requirements and duties with personal/family concerns at a time like this?
Immediately a week ago Monday when we were told things were accelerating in California, including Southern California, we had no activity in the building. That was when there was the 15-day sort of stand down approach that was announced by both the president and our governor and others. I basically shut down the building because we had no business and sent everyone home and told them: “You will be paid for what you’ve been scheduled through March 31st. We need a little bit of time to understand what’s going on, what the impacts are and to work on plans to secure our future. In the meantime, we need you to take care of yourself and your families.” I personally made the decision as the CEO to send everyone home with pay from that day until March 31st and (now) we’re in the midst of putting plans together where we can cut expenses (which) we’ll be doing like everyone else. … We’re having to dip into reserves. We’re just fortunate we have reserves to draw from, but that only lasts so long. So we are having to make adjustments and we are working to present budgets and to modify budgets like everyone else is. … There’s a great deal of pain and fear right now because people don’t know what’s going to happen. I don’t know anyone right now personally who doesn’t have someone that they know who’s affected by this. … That’s the reality we all face. We’ve got fears and we’ve got worries from paychecks on down. From a personal level I want our team to know that we get it and we are going to try and find ways of leading calmly, intentionally and be able to provide the best information for a secure future that we can, realizing that we are all going to feel some pain.