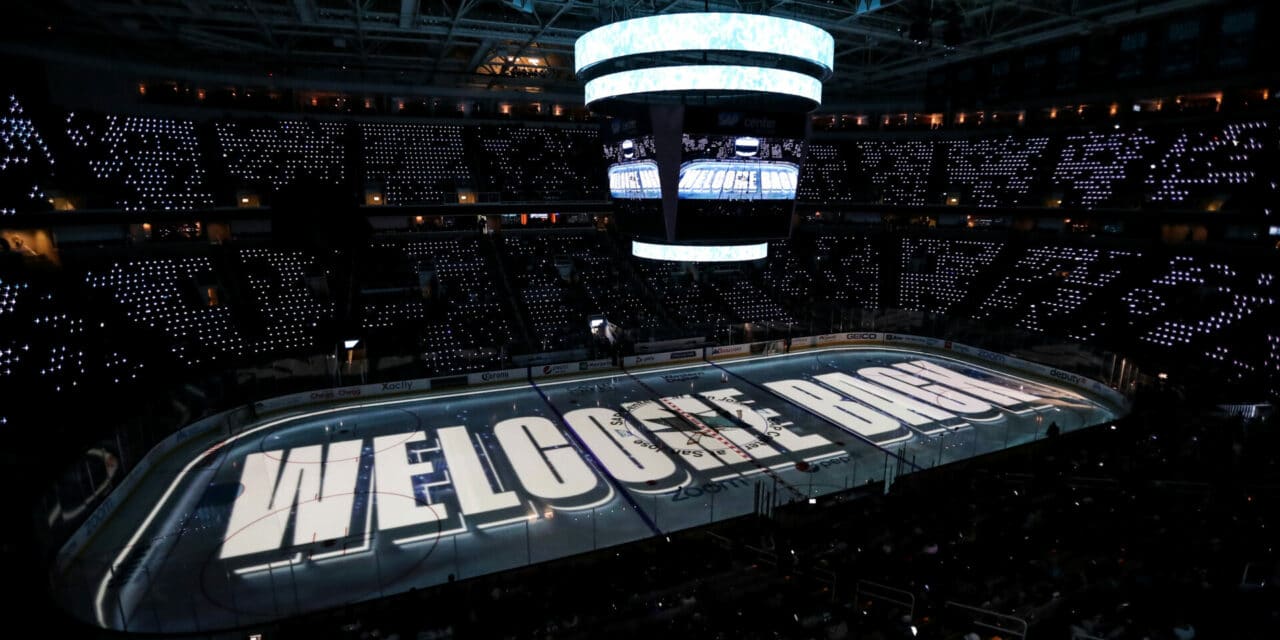 PixMob had supplied the NHL team with LED wristbands

The San Jose Sharks’ production team at SAP Center has a new toy: the Nova Pro LED system from Montreal-based PixMob that lights up seats in programmable patterns, making the NHL arena the world’s first to deploy the immersive technology.

The Sharks had worked with PixMob, which has had a hand in multiple Super Bowl halftime shows, for six years. The company had supplied the Sharks with LED wristbands used during game presentations, according to Doug Bentz, the Sharks’ vice president of marketing.

“It was very successful in terms fan engagement and the overall show,” Bentz said, but there was a desire to accomplish a similar effect without the intensive effort of distributing wristbands, which were single-use and thus not very sustainable.

The Sharks did work on wristband recycling efforts with PixMob, but a new approach – taking a temporary activation and making it more permanent — seemed the way to go, and so team and company put their heads together, Bentz said.

“Before we invented the NOVA Pro, PixMob’s experiences were created on an event-by-event basis. This new solution not only allows for the creation of unique new experiences within a venue, but also eliminates single-use objects,” said Jean-Olivier Dalpond, Chief Commercial Officer at PixMob, in a news release.

“They had never done this before,” said Bentz. “We basically collaborated with them on a project to prototype and manufacture these for the first time. So really we were the pilot program for the new product.” 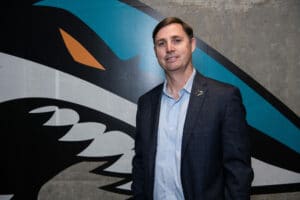 The system is wirelessly controlled, battery operated and tamper-proof and can create words and images, like a shark moving around the seating bowl, and is suitable for concerts and other non-sports events.

Discussions began in 2019 and the system made its debut on Oct. 16 for the Sharks’ home opener against the Winnipeg Jets. From discussions to having a prototype took about eight months, but just as manufacturing began, the COVID crisis shut down venues.

“We were set to launch this in the 2020 season and were obviously sidetracked by the pandemic,” Bentz said.

The system was a “significant capital expense,” but not as costly as other game presentation technology like on-ice projection or scoreboard and video screen upgrades, he said.

“The fact that we were co-innovating with PixMob as the pilot program for this, we probably also got to enjoy some significant savings from that as opposed to bluing something off the shelf,” Bentz said. “It was not an insignificant cost but it definitely wasn’t a multi-million-dollar project.”

The lights have one screw that affixes it to a seat and once detached the batteries can be easily replaced, which will happen once per year, based on power requirements for how they are being used, Bentz said.

“We have the ability from a single console to, on a seat-by-seat basis, turn up and down the intensity of the light, so we are kind of playing right now with that balance of battery life and light intensity. We’re only at 60% of where the light intensity could be. There are times when we could certainly turn it up.”

The system employs, in four locations on the ceiling, infrared sensors that send signals to the LEDs. It’s being used during the opening show and other big moments and Bentz expects that over time, the crew at SJSHARKS Productions will master additional capabilities.

The Sharks are in discussions with partners on how to use the system for activations.

“There are certainly a ot of options we are looking at and we are already in some deep conversations with partners for how they are going to take advantage of it,” Bentz said.

The Sharks have already fielded multiple inquiries from venues and teams interested in the system, he said, adding that elevating the entertainment experience is going to be a crucial aspect of filling seats in the post-pandemic months and years.