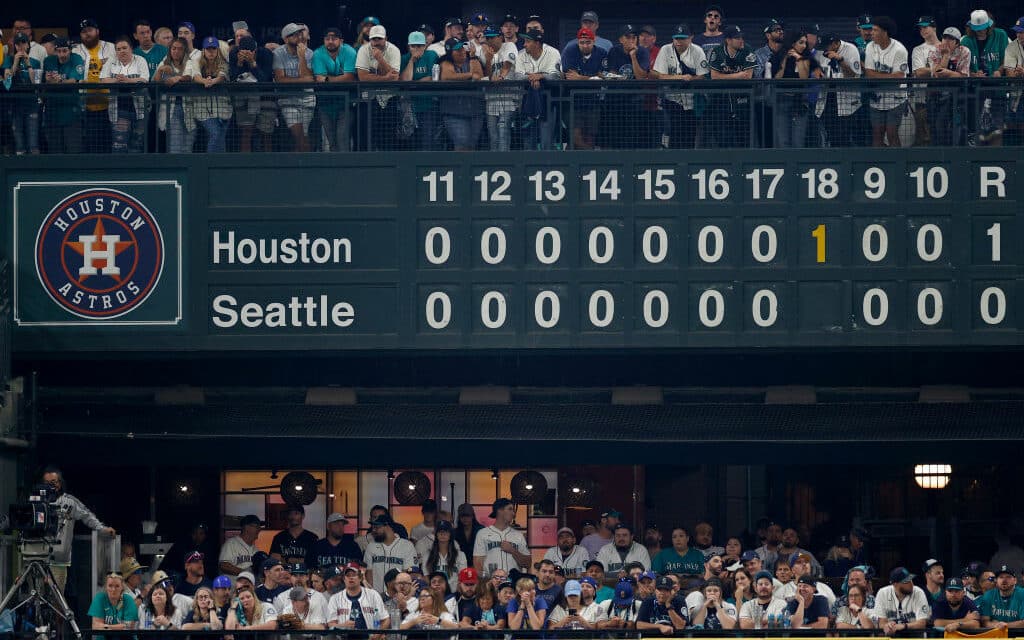 MARINERS MARATHON: The first and only run of game three of the American League Division Series between the visiting Houston Astros and Seattle Mariners is recorded after Jeremy Peña hit a solo home run in the eighteenth inning at T-Mobile Park on Saturday. (Getty Images)

Meagan Murray, general manager for Sodexo Live! at T-Mobile Park, and her crew were ready for two games in two days when the MLB American League Division Playoff series between the Seattle Mariners and Houston Astros shifted to the Pacific Northwest.

What they weren’t expecting was the equivalent of two games in one day as the Mariners, down 2-0 in the best-of-five series, hosted their first home playoff game in more than 20 years. But that’s what transpired as the game stretched through 17 scoreless innings before the Astros broke through with the game’s lone run, a homer, in the top of the 18th.

Per caps nearly doubled those of opening day and the game in which Ichiro was inducted into the Mariners Hall of Fame in August, and that’s despite beer sales being cut off after the seventh inning, as per policy, Murray said. 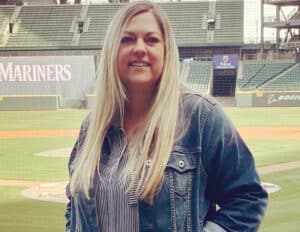 Not knowing how long the game would go or if the series would be extended or end abruptly, Murray and company, augmented by extra hawkers hired through a third party, continued to operate as usual and fortunately, having prepared for a second game, they were as ready for what turned into a marathon.

“I wish I could say I had a crystal ball and I knew that was going to be an 18-inning game, but we did spend the week getting ready, completing cleaning and restocking and preparing for the sold-out crowd,” said Murray, a Seattle native. “If we knew it was going to be a doubleheader versus just extra innings, it would have been a lot different.”

Food storage spaces were well-stocked as a second home game on Sunday was just a Mariners’ win away, she said. Gates were opened 2.5 hours before the first pitch, a half-hour earlier than usual for sellouts or special events such as the Ichiro Hall of Fame game.

“We were loaded up and ready to go inventory wise,” Murray said.

All of the stadium stands remained open for the duration.

“We were able to continue to sell hot dogs, pretzels, snack items, water, soda through those (portable) ballpark stands sprinkled throughout the stadium,” she said. “Our biggest crush was before the game. We did have a couple postseason items that we featured.”

One was the post-season Value Pack consisting of a small hot dog, 22-ounce refillable soda and a pack of licorice for $10.

“That sold really well, as well as the ‘CALzone.’ That’s from Ballard Pizza. We have two locations with them. We put that together for, obviously, (Mariners’ catcher) Cal Raleigh. That sold out,” she said.

“We put a ‘Sea Us Rise’ cocktail together (after a Mariners marketing tag line). We used Scotty’s fresh pineapple juice — he’s local down at (Seattle’s famed) Pike Place Market — for a fun cocktail that had kind of a blue float to it. That sold well. A lot of times fans want ballpark basics. Who goes to a baseball game and doesn’t have at least one hot dog? Those are the fan favorites but our ballpark has such a wide variety of specialty items, from either local partners (like dumpling specialists Din Tai Fun) or ourselves, which is something we really pride ourselves on.”

T-Mobile Park’s offerings generally get top marks in ballpark food and beverage rankings, a source of pride for Murray, who has been the Sodexo Live! general manager at the facility for two years.

“We’ve been number one in food and beverage with (the website) Thrillist for the last two seasons,” she said.

Counting the tenure contract was held by Centerplate, which Sodexo acquired in 2017, Sodexo Live! has been at T-Mobile Park for 23 years.

Some of the Sodexo Live! employees have worked at the ballpark that long and none of them complained about working overtime on Saturday, Murray said.

Even when some concessions closed, workers stuck around to watch the game, she said.

“There’s so much pride in the team and it’s the same with us,” she said. “We strive to be the best of the best every year and we continue to push that limit.”