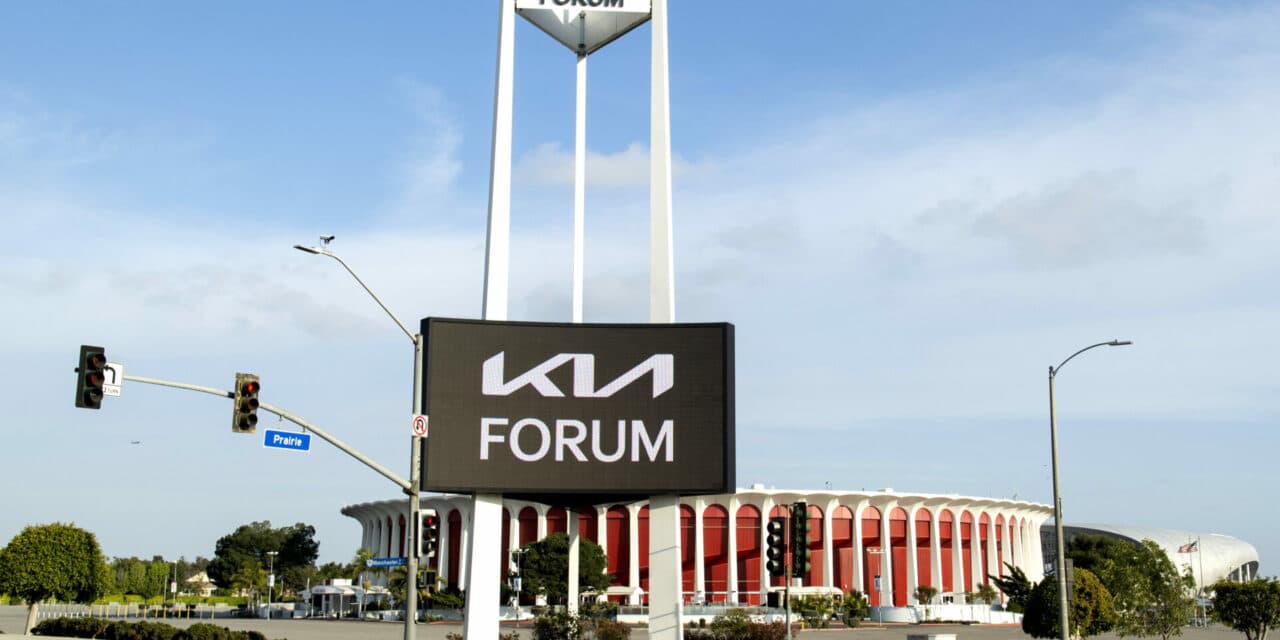 UPDATE 4/4: Forum and Kia officials officially announced the venue’s new name as the Kia Forum, effective Monday morning as unveiled at a private event at the venue.

It’s the first naming rights deal for the automaker, with Kia officials in the announcement noting the company’s Southern California roots including its first U.S. headquarters being established in the region in 1992.

The naming rights partnership will include new outdoor and indoor signage, installation of EV charging stations, as well as Kia vehicle displays. The announcement says an exclusive “Kia Club” hospitality lounge is also on tap.  Terms of the agreement were not disclosed, although industry sources have told VenuesNow the deal runs for 10 years at $5.2 million annually.

The Los Angeles Times published a photo of Kia signs going up in front of the Inglewood venue and sources told VenuesNow that the deal will be officially announced Monday. 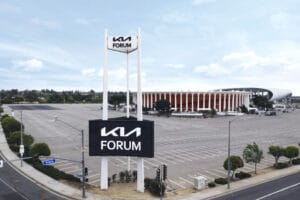 Electric: The Kia Forum will be getting new EV charging stations as part of the naming rights agreement. Photo courtesy of the Kia Forum.

The 17,500-seat venue will become the Kia Forum, sources said, as shown in the Times photo and images circulating through social media.

Although it’s unclear who brokered the deal, CAA Sports had been shopping naming rights for the Forum in 2020, with sources telling VenuesNow they were seeking $5 million to $10 million annually. CAA Sports officials did not return an email for comment.

The deal comes on the heels of the mid-November blockbuster naming rights deal for Crypto.com Arena, formerly Staples Center, with the cryptocurrency exchange paying $700 million over 20 years

The Forum, which remains one of the most active concert venues in the world, was purchased by Los Angeles Clippers owner Steve Ballmer in 2020 for $400 million, while work continues on the $2 billion Intuit Dome in Inglewood, the Clippers’ future Arena set for completion in 2024.

The Forum was known as the Great Western Forum from 1988-2003 and since 2014, after a major renovation, has been the Forum Presented by Chase in a presenting sponsorship with the bank. The arena was home to the Los Angeles Lakers and Kings from 1967 to 1999.

It’s been a top concert venue over the past decade after Madison Square Garden bought the building and spent $100 million in upgrades.  Upcoming shows include Billie Eilish shows next week, reggaetón star Rauw Alejandro April 16, a residency from Mexican rock band Mana and more. The Forum placed No. 3 worldwide on Pollstar’s Q1 2022 Top 100 Arenas chart based on reported grosses, behind only Madison Square Garden in New York and T-Mobile Arena in Las Vegas.  Based on ticket sales for all of 2021, the Forum was No. 3 among arenas, with 277,781 tickets reported sold, behind only Bridgestone Arena in Nashville and Madison Square Garden.