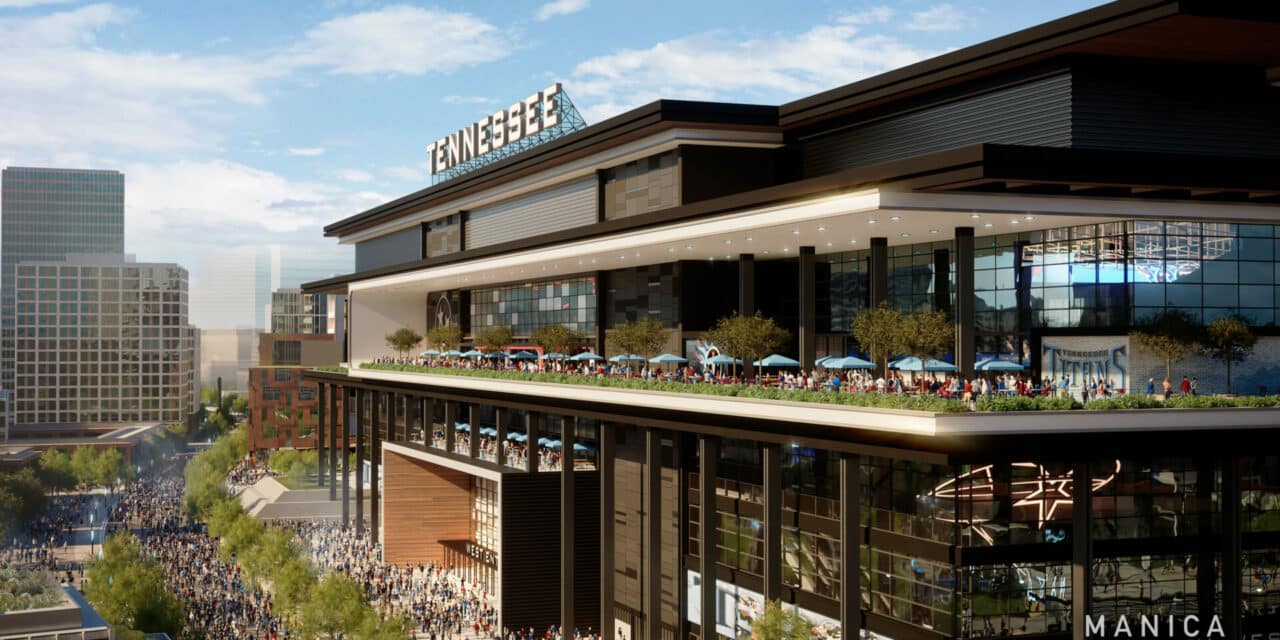 RAISE THE ROOFTOP: A rendering of the Tennessee Titans’ proposed stadium shows some of the rooftop terraces, a signature design element. (Courtesy Titans)

The Tennessee Titans today released new renderings of their proposed NFL stadium, designed with rooftop terraces, two concert stages and an ETFE roof as part of the enclosed facility.

The 60,000-capacity, rectangular-shaped stadium would be built next door to Nissan Stadium, the Titans’ current home along the Cumberland River. The new building would have about 9,000 fewer seats. The project is up for approval by the Metro Council and the local sports authority in the coming weeks.

David Manica, owner of Manica Architecture, the stadium’s lead designer, shared his thoughts with VenuesNow on signature design elements for the $2.1 billion project, $1.7 billion of which are hard construction costs.

“We worked hard to bring the scale of the project down visually to tie into the neighborhood … in a way that not many NFL stadiums have had the opportunity to do,” Manica said. “It’s an exceptional site that’s part of the redevelopment of the east bank, easily accessible from downtown.”

In addition, the stadium’s roof terraces and wraparound porches with views to the city from multiple locations are influenced by the architecture framing other buildings downtown.

“The seating bowl will be spectacular,” Manica said. “We pulled all the seats in much closer than Nissan Stadium. The circular ETFE roof floats above the stadium, wrapped with a 21-foot tall halo videoboard that ties all the different screens together.” 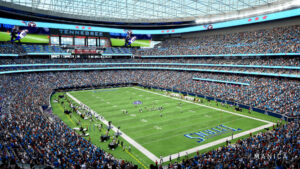 TIGHT FIT: The new stadium’s seats will be closer to the field than Nissan Stadium. (Courtesy Titans)

Manica answered the question about the “circle in square” equation for the ETFE roof vs. the stadium. The transparent, plastic material is a standard part of design for enclosed NFL venues.

“The circle of the roof is optimized for the structure of the ETFE (portion) and sits perfectly over the majority of the seating bowl,” he said. “The shape and form of the facade of the building is then optimized to the concourse layouts, lounges and other amenities.The simplicity is a hallmark of the design.”

Due to the roof and site constraints, the new stadium was rotated 90 degrees and oriented east-west, a departure from the typical north-south layout dictated by the sun’s rotation.

“That allowed the project to be better situated within the master plan and provide better access for spectators,” Manica said. “The reason we were comfortable doing that was because of the ETFE roof, which will control the amount of sunlight coming onto the field, as carefully as we did at Allegiant Stadium. The shadows for television broadcasts and fans are not an issue.”

He said, “I’m not going to say we’ll match it with a stadium in the Las Vegas desert sun, but we will have absolute control over cooling and comfort level. It should be naturally lit, but in a nice, soft and shadow-free environment.”

In Nashville, a city driven by live music, the stadium design extends to a pair of permanent concert stages: one large structure that rolls out of the east end and a smaller, more intimate “Nashville Stage” on the west end with the city as a backdrop.

“It’s much more than a football stadium,” Manica said. “Having a premier concert venue is of utmost importance.”

The stadium enclosure will provide the Titans with event certainty, considering the thunderstorm that forced postponement of the the Garth Brooks show at Nissan Stadium in 2021.

Multiple premium seat options will include a field-level club along the south sideline, field-level suites at the west end and midlevel sideline clubs with in-bowl patios. Loge boxes and party terrace boxes are part of the mix, Manica said.

Pending approvals, Manica Architetture will move on to the next phase of stadium design in December-January, he said. The Titans hope to start construction next fall and open their new facility for the 2026 NFL season.

Hastings, a local architect, participated in the initial design work. The architect of record, the entity responsible for designing and preparing construction documents for a new building project, will be determined at a later date.