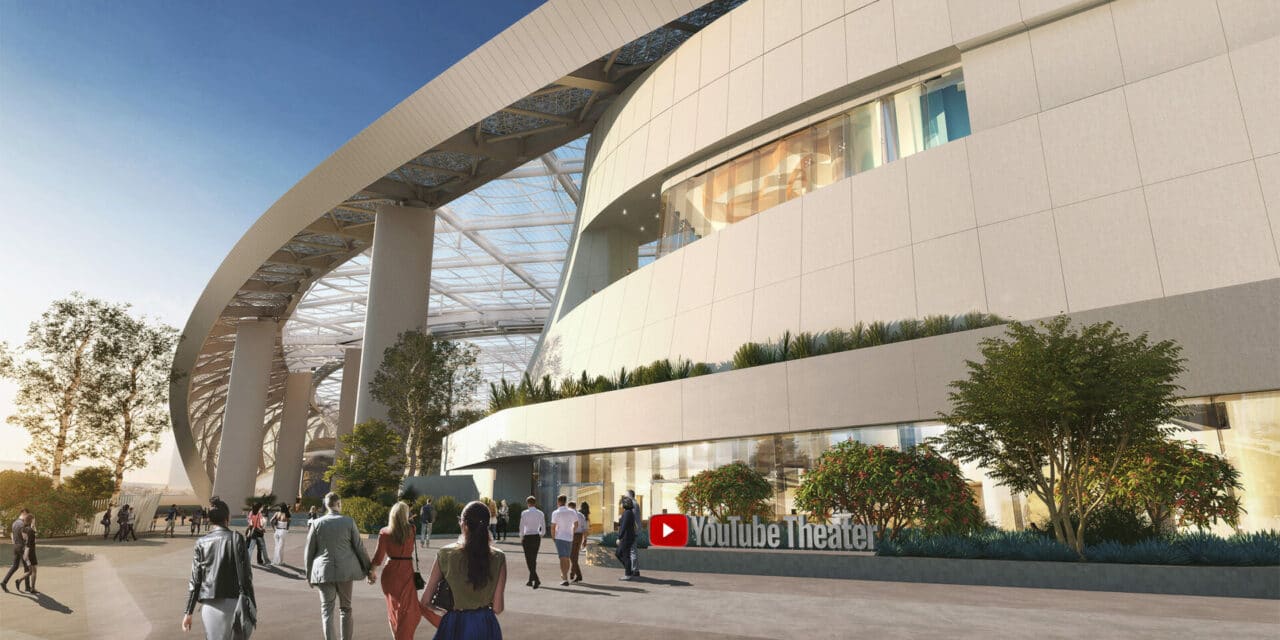 A rendering of YouTube Theater branding. An exterior sign will transform into a video screen for patrons to interact with the streaming platform’s content. (Courtesy venue)

Digital streaming monolith YouTube has signed on for naming rights to the new 6,000-seat performance venue that’s part of the massive Hollywood Park sports and entertainment district in Inglewood, California.

Financial terms for the YouTube Theater were not disclosed for the deal, other than it’s a multiyear agreement, said Jason Gannon, managing director of Hollywood Park and SoFi Stadium, the NFL stadium that sits next door.

The deal is tied to Google Cloud’s founding partnership at SoFi Stadium, which was announced in September. Founding partner deals are in the range of $3.5 million to $4 million, according to industry sources, and the Google/YouTube agreement may go higher at $4.5 million a year, they said.

The deal was officially announced today. Google owns YouTube, which it acquired in 2006, one year after the streaming platform was formed. It’s the first naming rights deal for YouTube.

Legends, the sales agency for Hollywood Park, brokered the agreement for Google Cloud that extends to the YouTube deal.

YouTube, by virtue of its digital platform that now covers 2 billion people worldwide in 80 languages, is positioned to expand the audience for events at Hollywood Park apart from NFL games for the Los Angeles Rams and Chargers. In addition to concerts promoted by Live Nation in an exclusive booking deal announced two weeks ago, comedy shows and esports competitions are expected to fill the theater among other events, Gannon said.

YouTube’s emphasis on technology and the content creators and the millions of followers they connect with online is a unique aspect that makes for a compelling draw for the theater, he said.

Theoretically, YouTube Theater would compete for shows with AEG’s Microsoft Theatre and the Greek Theatre, owned by the city of Los Angeles. Both venues have similar capacities. Across the street in Inglewood, the Forum, owned by Los Angeles Clippers owner Steve Ballmer, has the ability to do half-house capacity for 8,000 in the lower bowl.

Now, there’s a new kid on the block in Greater Los Angeles for mid-size tours.

“Creating something for everyone that can take on a lot of shapes and sizes through the entire 300 acres … that’s the type of flexibility that’s important to us as we thought about a venue that size at Hollywood Park,” he said.

As part of the activation, a large YouTube Theater digital sign attached to the theater’s exterior features a play button that when pushed, transforms the sign into a video screen for guests to interact with and view highlights of YouTube’s creator and artist content.

Inside the theater, a digital wall showcases YouTube creators and artists.

The live streaming of concerts taking place at YouTube Theater will vary depending on the artist, but it’s a key piece of the production format at the venue, Gannon said.

The theater itself is part of the original design that extends to the 70,000-seat stadium and the American Airlines Plaza, a 2.5 acre outdoor space that all sit under a swooping roof canopy.

The three-story theater has six luxury boxes, a 3,500-square-foot club connected to 140 premium seats and a 1,200-square-foot high-end back-of-house hospitality space for artists and guests.