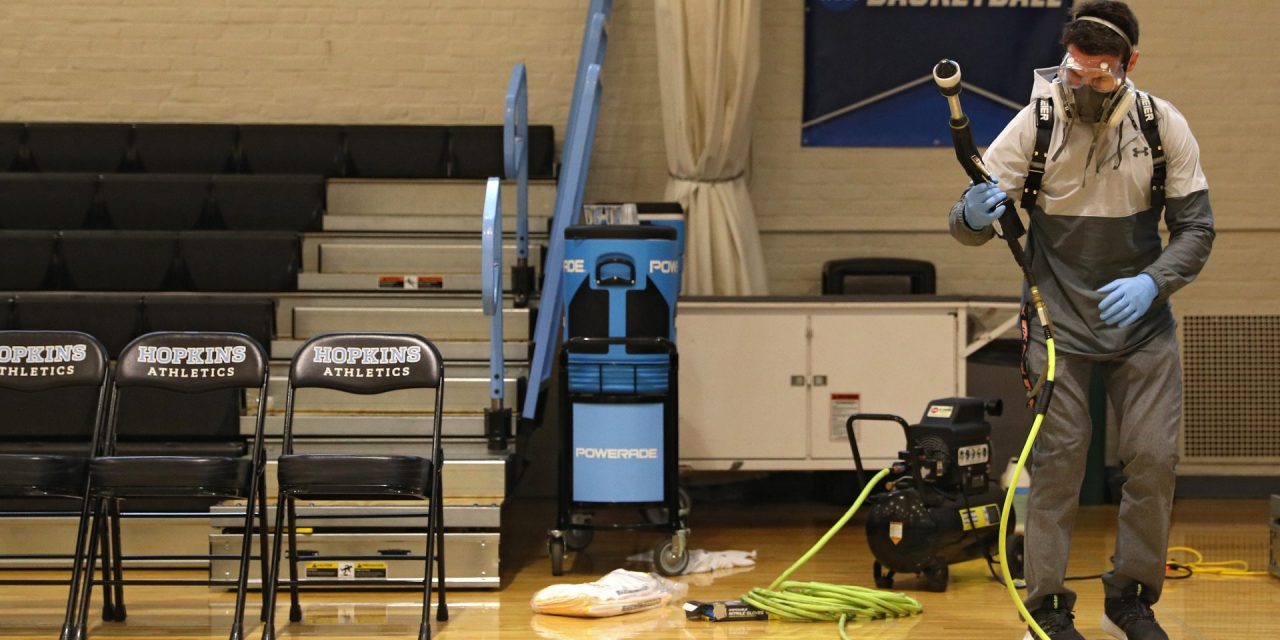 In the new normal that awaits live event venues in the wake of the coronavirus pandemic, sanitation, cleaning and janitorial services will no doubt play a major role in convincing attendees and staff that it’s safe to return.

While the Trump administration has announced a roadmap to reopen the U.S. economy, public assembly facilities included, some polls indicate the event-going public will be wary, at first, of returning en masse to live events.

Venue hygiene will be crucial to not only ensuring the safety of fans, artists, athletes and crews but also engendering the level of confidence necessary for a return to anything resembling the pre-COVID-19 environment.

It was a critical component to the successful reopening of the Hong Kong Convention and Exhibition Centre during the deadly 2002-03 SARS outbreak and will be again following the broader shutdowns prompted by the current pandemic, according to Cliff Wallace, who was executive director of the Hong Kong center during the earlier crisis.

“The whole issue of hygiene just exploded, not only in actual practice but as part of the psychological comfort level that was needed when we reopened,” Wallace said.

Sean Spaziani, senior vice president of sales and marketing at Clean Harbors and its Safety-Kleen division, a company that provides sanitation services on the NASCAR circuit and for thousands of other clients across a variety of industries, said it was crucial for venue owners and managers to understand the critical difference between disinfection and decontamination and for any company to develop and implement a business plan focused on preparedness, business continuity and response to an infectious disease outbreak.

“In this environment, a perceived risk has the equivalence to an actual risk in the minds of the consumer and the public,” Spaziani said. “Your business plan has to satisfy the perception as much as it does the actual risk.”

Disinfection vs. Decontamination: Know the difference

Overcoming hesitancy in the post-coronavirus world will be an elemental aspect of venues’ economics, agreed Art Rodriguez, vice president of operations, sports and entertainment at ABM Industries.

“Once venues begin to open again, people will be hesitant to attend large events unless they have reassurance that proper cleaning precautions have been taken,” Rodriguez said. “Guests, artists and crews need to know that their safety is a top priority. To build their confidence, venues will need to be more forthcoming about their cleaning procedures and how they’ve adjusted them after COVID-19. In the long term, we’re going to see a cultural shift, where people are more aware of cleaning and disinfecting at venues.”

“We are being asked by major league sports venues to develop cleaning and disinfecting programs to raise the confidence of guests and fans,” he said. “The good thing for Jani-King is that the practices such as electrostatic spraying (applying an electric charge to a cleaner or disinfectant to better cover a surface) and the use of sustainable forms of stabilized bleach has been in our programs for years. The current pandemic is just confirming our strategies.”

A major change that will be evident when venues reopen is that cleaning and maintenance crews will be more visible to the event-going public.

That approach of “visible vigilance” was taken in Hong Kong in 2003 after the arrival of severe acute respiratory syndrome, Wallace said.

“We actually dressed our housekeeping staff to where they would be ultravisible,” he said. “We went to bright colors and where we normally would have had two or three cleaning the floor or dusting off the handrails on the escalators or wiping down the buttons on lifts, we doubled and probably more regularly tripled the number of people we would have normally had. We increased our casual staff … to visibly show we were making an all-out proactive effort to practice hygiene in every respect.”

“In the past, cleaning staff were ‘invisible.’ Guests didn’t need to see them working, just the results of it — empty trash cans, stocked restrooms, etc.,” said Rodriguez. “Now, guests will be looking for visible evidence that venues take cleaning and disinfecting seriously. A lot of activity that used to occur behind the scenes will be front and center.”

Signage announcing cleaning schedules or when areas like a rest-room or particular surfaces such as seats, handrails and the like were last cleaned are likely to be prominent in reopened facilities.

In the “new world we are going to be living in … people are going to want to know when they enter a space that it has been cleaned,” and signage could play a key role, Spaziani said.

Wallace said that cleaning frequency was increased during and after the SARS outbreak.

“When they said something (needed to be cleaned) every hour, we cleaned it every 20 minutes to 30 minutes, he said, adding that after SARS, even the smell of disinfectants had a positive impact at the Hong Kong center.

Executives thought it was important that people be able to smell the disinfectant, whether it be in the lobby, the restrooms or the elevators, he said. “We wanted the odor to be there.”

Visible vigilance includes things like more soap and hand cleaner dispensers that are filled more regularly and other measures that had begun at venues in the interim between the emergence of the new coronavirus and the shutdowns that followed.

“Quite frankly, that’s sort of common sense. That is a minimum of what is required when we reopen the buildings after COVID-19,” said Wallace, who, in addition to his continuing board duties at the Hong Kong center through 2018, served from 2006 through 2012 as chairman of a Hong Kong sister company responsible for the management of the Zhengzhou International Convention & Exhibition Center. Additionally, he was chairman of the Shenyang New World Expo from 2006 through 2018. Wallace remains an executive adviser to Expo. The two venues are in the capital cities of the mainland China provinces of Henan and Liaoning, respectively.

Wider use of touchless technology will also mark the post-coronavirus environment.

“If there are venues that still do not have touchless restroom dispensers, you can bet they are converting now,” Borland said. “For food and merch vendors, touchless technologies will most likely advance in the near future.”

Operational training in the use of new products and applicators will be a crucial aspect of bringing to bear cutting-edge technologies such as chemicals with the ability to use UV light as a reactant to create safer surfaces for longer periods of time, he said.

And while electrostatic spraying, which allows a disinfectant to bond to molecules, thus reducing virus kill times dramatically, isn’t new technology, its use will increasingly be one of the key weapons in the sanitation arsenal.

Rodriguez, who has worked in the janitorial industry for more than 30 years, noted that electrostatic sprayers, which allow for touch-free disinfection and use less product, are going to become the norm in all types of venues.

“They’re already in use in several venues that we service, and will continue to grow in popularity,” he said. “However, they aren’t ideal for large areas, so they’ll be limited to important areas only, like player locker rooms, medical rooms, training rooms, etc.”

According to Spaziani, the time and costs involved in bringing in trained professionals to disinfect or even decontaminate at racetracks might not be as daunting as many imagine.

“It’s not necessarily as pricey or as time consuming as you would think. It all depends on the amount of indoor areas that need to be cleaned as opposed to outdoor areas,” Spaziani said. “Some tracks, they’ve got office buildings attached, they’ve got a hotel attached, they’ve got restaurants attached. But when you get out into open air, there are other methods that can be used. Now the chemicals that you are applying are very similar … but in an open-air environment you can use pressure washing. You cannot use pressure washing in an office building. Little things like that make a difference.”

More complex jobs generally take a full day or two, but for “an outdoor dirt track with a small office attached, we can get out of there in a half a day,” he said.

Quoting a standard price per square foot, which is often requested, all depends on the space, which has to be evaluated before a proper proposal can be offered, Spaziani said.

“Think about furniture being moved, spaces being cleared. The ability to ventilate and time to dry and all the different factors that come into play from one space to another,” he said.

Being sensitive to the difficult situation many facilities find themselves in is also a key consideration for Safety-Kleen, and the company is keenly aware of the business environment as well as the important role that the return to live sports and entertainment will play in not only getting economies humming again but also getting people back to some sense of normalcy.

Spaziani sees a gradual return to a new normal, with some leading and some following.

“I think we’re going to see the same thing we did when it fell apart, just like when we saw the NBA stand out” by becoming the first of the big leagues to put its season on hold, he said. “That created social pressure for everyone else to respond. There’s going to be a business that stands out and does it the right way and takes extreme measures to protect their people and I think there is going to be the same social pressure to pull other businesses upward.

“We will never go back to living the way we did before. It will definitely be a new normal.”