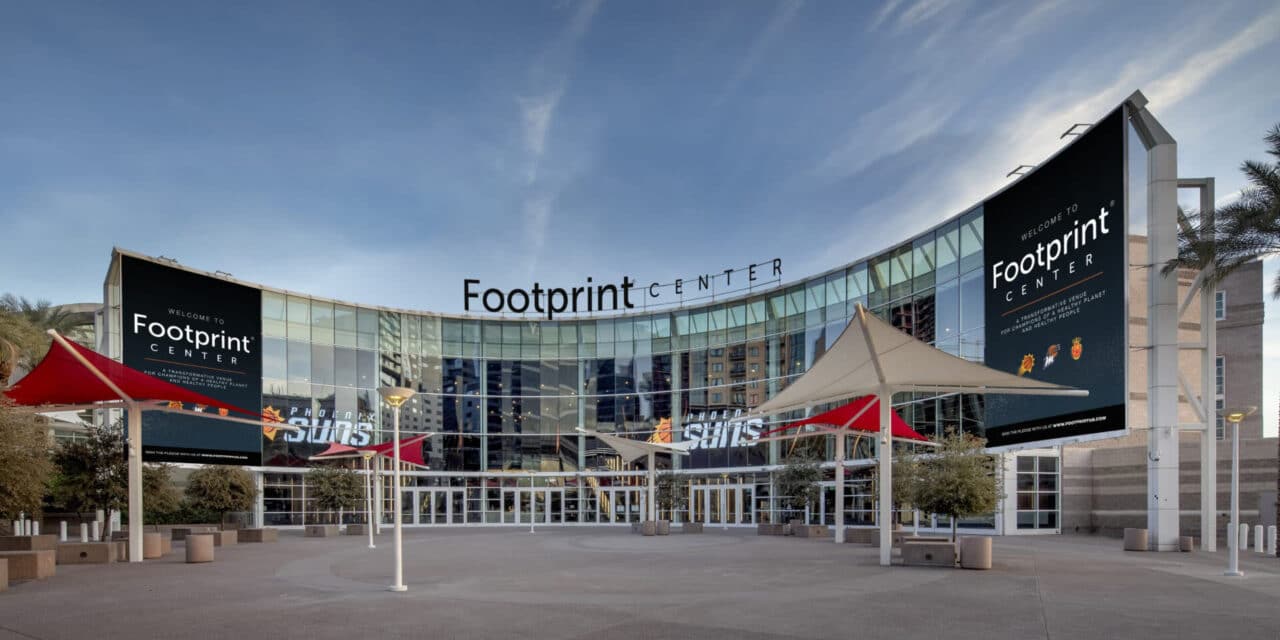 A rendering shows the exterior of what’s now known as Footprint Center, home of the NBA Phoenix Suns and WNBA Mercury. (Courtesy teams)

The Phoenix Suns and Mercury have entered a naming rights partnership with Gilbert, Arizona-based Footprint, an engineering company that makes sustainable packaging, and the teams’ downtown arena will now be known as Footprint Center.

Financial terms were not disclosed. Robert Sarver, managing partner of the NBA Suns and the WNBA Mercury, who also play at the arena, announced the deal Friday morning during a Zoom call with media members.

The building was called America West Arena from its opening in 1992 through 2006 and has been known since as US Airways Center and Talking Stick Resort Arena. The tribal resort’s deal, signed in 2014, expired in November, and the name changed to Phoenix Suns Arena. The arena recently completed a $230 million renovation.

The arena was also home to the NHL Phoenix — now Arizona — Coyotes from their first season in 1996-97 until they moved in late 2003. The Coyotes now play at Gila River Arena in the Phoenix suburb of Glendale.

The Footprint Center has hosted concerts over the years by the likes of top artists like Frank Sinatra and Ariana Grande. Pollstar box-office reports stretching back to its opening year of 1992 show 913 concerts and events averaging 7,641 tickets sold and a gross of $415,647.

The partnership includes product integration as well as naming rights. Fans can expect to see food served in Footprint’s biodegradable, compostable and recyclable solutions along with messaging about switching from single-use plastic, according to a news release.

“Our agreement … with Footprint is something that we think is going to be one of the most unique corporate sponsorships in all of sports,” Sarver said during the announcement. “It’s going to transform our arena into an arena that is going to be the most environmental friendly in the world and hopefully others will follow.”

Sarver is also managing partner of soccer team Real Mallorca, which plays in Spain’s top-level La Liga and is also part of the deal.

“We look at the Suns as not only our partner here but really our customer and helping them transform the way they operate the (arena), bringing our technologies into stadium events and arenas,” said Footprint CEO Troy Swope.

Sarver said a wide net was cast for a new naming rights sponsor, but a conscious effort was made to look in the organization’s “own back yard” to see “who is it that’s locally-based that we should be talking to.”

“As part of that process we got to know Troy and his team over the last several months,” Sarver said.

The partnership continues the Suns’ emphasis on embracing technology and innovation and Footprint will be involved in experimenting with sustainable materials and operations going forward, Sarver said.

“It’s not just about signage and advertising and broadcasting,” he said. “It’s about, how do we really create the most value for our sponsors? What have here is an opportunity to have an 18,000-person lab here in this arena, a living lab that will be evolving and our hope is, number one, that our arena is going to be the most sustainable arena and then, other arenas throughout the world will get a chance to see what we’ve done here, what Troy’s team has done for us and use that and broaden the base.”

Said Swope: “They gave us the opportunity to come in and (said), hey, help us transform they way the Suns and the rest of the NBA manage materials and waste, and we’re going to reduce CO2 emissions and everything.”

He said he is excited about the Suns’ enthusiasm for using the arena as a place to educate event-going Phoenicians about sustainability and the scourge of plastic pollution.

“This is an unbelievable platform to do that,” Swope said.

The deal was announced with the Suns and Milwaukee Bucks deadlocked 2-2 in the NBA Finals.